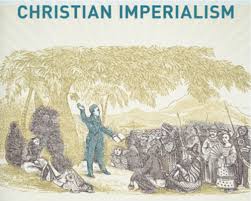 One example of religious imperialism can be seen in the era following the Age of Discovery which began in the fifteenth century. European kings, and later the United States, used a legal fiction known as the Doctrine of Discovery to justify their acquisition of new territories outside of Europe. Following this doctrine, Christianity is seen as superior to all other religions and therefore Christian monarchs (and later Christian republics such as the United States) have a legal and religious right and even an obligation to impose their rule on all non-Christians.

It should be noted that the Doctrine of Discovery applies only to Christian nations in their dealings with non-Christian peoples. In his book American Indians and the Law, law professor Bruce Duthu writes:

“Only Christian colonizers in their encounters with non-Christian peoples could invoke the discovery doctrine. An indigenous seafaring tribe, by contrast, could not plant a flag in the British Isles or on the beaches of Normandy and make comparable claims to England or France under the doctrine.”

Law and its interpretation by the courts regarding American Indians in the United States are based on two concepts: (1) the U.S. Constitution, and (2) legal precedents from international law, primarily a legal fiction known as the Doctrine of Discovery.

In 1787, the United States adopted a constitution which is considered the supreme law of the land. Article I, Section 8, Clause 3 delegates to Congress the power “to regulate commerce with foreign nations, and among the several states, and with the Indian tribes” and thus dealings with the tribes are to be federal. Most of the litigation regarding Indian matters concerns this clause. However, it has not been unusual for legal scholars, including one Supreme Court Chief Justice, and for many politicians and government leaders to ignore this clause.

The Doctrine of Discovery is not well-known to people who are not: (a) historians, (b) legal scholars, or (c) American Indians. In brief, this is an ancient European Christian legal concept which says that Christian nations have a right, if not an obligation, to rule over all non-Christian nations. Thus, the European nations, and the United States after 1787, felt that they had a legal right to govern American Indians. The Doctrine of Discovery gave Christian nations, including the United States, the right to take land away from indigenous peoples paying for it with the gift of Christianity.

The Popes and Spanish Law

The Catholic Pope in 1452 laid the foundation for the Doctrine of Discovery by issuing the papal bull dum diversas which instructed the Portuguese monarchy “to invade, capture, vanquish, and subdue all Saracens, pagans, and other enemies of Christ, to put them into perpetual slavery, and to take away all their possessions and property.” The ideas found in this papal document were later woven into U.S. Indian law and continues to guide U.S. Indian policy.

The original papal bull, which is still in force, was strengthened in 1455 with another papal bull, Romanus Pontifex, which sanctified the seizure of non-Christian lands and encouraged the slavery of natives. Following the discovery of the Americas by the Europeans, Papal bulls by Pope Alexander VI in 1493 granted Spain and Portugal all of the lands in the Americas which were not under Christian rule. This began the European assumption that the native people of the area didn’t really own the land because they were not Christian. The Pope decreed that:  “barbarous nations be overthrown and brought to the faith itself.”  The Inter Caetera papal bull stated: “We trust in Him from whom empires, and governments, and all good things proceed.”

This laid the legal foundation for assuming that government comes only from the Christian god and therefore Christian nations have a legal right to rule over non-Christian nations. Indian writer Vine Deloria would later comment:

“Thus armed with a totally bogus title issued by God’s representative on earth, the Spaniards then began a brutal conquest in the Americas which virtually obliterated the native populations in the Caribbean within a generation.”

By 1513, Palacios Rubios, Spain’s master jurist, had refined the Doctrine of Discovery into a document which was to be read aloud, in Spanish or in Latin, when new peoples and/or lands were encountered. The fact that the indigenous people might not speak Spanish or Latin was not seen as relevant. The document recited the Christian history of the world and then demanded that the Natives accept this version of history and submit themselves to the authority of the Christian Spanish King. The indigenous people were told that God has declared that the Pope rules all people, regardless of their law, sect, or belief. This includes Christians, Moors, Jews, Gentiles, or any other sect. The Native Americans were to come forward of their own free will to convert to Catholicism or

Furthermore, the Natives who resist are to be held guilty of all resulting deaths and injuries from the “just” war waged against them. The idea of a “just war” is based upon the word of Saint Augustine. Under this concept, a just war was one that was waged to right an injustice or wrong by another nation. One of these wrongs, according to the Christian view, was not being Christian. Thus, if an Indian nation were to fail to let missionaries live and preach among them, then they were committing a “wrong” which would have to be set right through a “just war.”

The Doctrine of Discovery entered into American jurisprudence in 1823 when the Supreme Court ruled on Johnson and Graham’s Lessee versus McIntosh. The Court found that the Doctrine of Discovery gave sovereignty of Indian lands to England and then to the United States. Indian nations, under this Doctrine, have a right of occupancy to the land. Christian nations, such as England and the United States, have superior rights over the inferior culture and inferior religion of the Indians. According to the Court, Indians have been compensated for their lands by having the gift of Christianity bestowed upon them.

The Supreme Court’s use of the Doctrine of Discovery in Johnson and Graham’s Lessee versus McIntosh laid the foundation for Indian law that still continues. The decision reinforced the superiority of Christianity as a governing philosophy and paid little attention to either Indian history or the possibility of Indian religions.

In an article in This Week from Indian Country Today, Steven Newcomb, Director of the Indigenous Law Institute, writes:

“From the perspective of Western Christendom, it was the ‘god-given’ right of all Christian sovereigns to locate and dominate (“possess”) all non-Christian lands on the planet.”

In 1954, the United States Supreme Court heard arguments in the Tee-Hit-Ton case. The government argued that under international law Christian nations can acquire lands occupied by heathens and infidels. In an article in Indian Country Today, Steven Newcomb writes:

“This is a religiously premised argument. It is also racist, to be sure, but it is an argument made by the United States government on the basis of the Christian religion.”

In their argument, the United States government not only cited the nineteenth century case of Johnson v M’Intosh, but also the Papal bulls of the fifteenth century and the Old Testament from the Bible.

In 1955, the Supreme Court announced its decision which denied the Tee-Hit-Ton any compensation for the taking of the timber. According to the Court:

“The Christian nations of Europe acquired jurisdiction over newly discovered lands by virtue of grants from the Popes, who claimed the power to grant Christian monarchs the right to acquire territory in the possession of heathens and infidels.”

Legal scholar Steven Newcomb, in an articles in Indian Country Today, writes of the government’s brief:

“It is a gem of religious racism that fully documents the illegitimate foundation of U.S. Indian law and policy.”

The Tee-Hit-Ton case reaffirmed the Doctrine of Discovery as the basis for U.S. law with regard to Indian nations. It reaffirmed this Christian doctrine as the principle to be used in judging American Indians and discounted American Indian history and religious traditions. It denied that Indians had any legal rights as pagan nations. Attorney Peter D’Errico, in an article in This Week from Indian Country Today, sums up the case:

“It reaffirms Christian Discovery as the basis of U.S. law regarding Indian nations; and it says this racist religious doctrine is still in full force and effect. It also says that Indians as people are not covered by the U.S. Constitution, which undermines the arguments of those who believe the Constitution ‘protects’ Indians.”

“Under the ‘doctrine of discovery,’ fee title to the lands occupied by the Indians when the colonists arrived became vested in the sovereign—first the discovering European nation and later the original States and the United States.”

George Zebrowski, in an article in Free Inquiry, writes:

“In other words, the Sherrill decision was based in part on the Doctrine of Discovery, one of the rare principles of American law that came not from English common law or from the pen of some Enlightenment philosopher but rather from the Vatican.”

In 2008, the International Council of Thirteen Indigenous Grandmothers traveled to the Vatican to ask Pope Benedict XVI to rescind historic church doctrine—the Discovery Doctrine—that has encouraged the genocide of millions of indigenous people. Vatican police, however, claimed that the women were engaged in conducting anti-Catholic demonstrations.

On numerous other occasions, Indian leaders in the Americas have formally asked the Pope to renounce the Doctrine of Discovery. At the present time, it would appear that this is still the policy of the Catholic Church and is a part of American law.