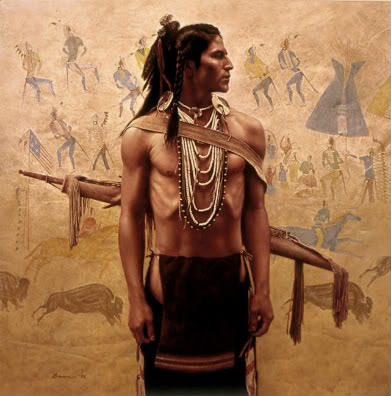 The basic Indian tribes of the Great Basin Culture Area include Bannock, Gosiute, Mono, Northern Paiute, Panamint, Shoshone, Southern Paiute, Washo, and Ute. All of these, with the exception of  the Washo, spoke languages which belong to the Numic division of the Uto-Aztecan language family.

One of the characteristics of the Great Basin cultures is sexual egalitarianism. Both boys and girls were free to engage in sexual exploration that could lead to a trial marriage. There was instruction in abortion methods as well as contraception. Divorce was simply a matter of either partner returning to their parental camp. With regard to marriages among the Shoshone-Bannock at the Fort Hall Reservation, historian John Heaton, in his book The Shoshone-Bannocks: Culture and Commerce at Fort Hall, 1870-1940, reports:

“Shoshone-Bannocks severedl marital unions as easily as they formed them, without raising turbulent social questions concerning the fate of children and the division of property.”

Sex was not restricted to marriage nor did marriage necessarily grant exclusive sexual privileges. Sexual relations outside of marriage were not seen as threatening to the marriage.

While marriage was an important economic union, among nearly all of the Great Basin groups it tended to be informal and was not accompanied by any ceremony. Marriage was a personal arrangement between individuals. In other words, the couple simply started living together.

“Marriage was supposed to be matrilocal for about a year, then independent.”

Among the Western Shoshone in the Steptoe Valley, there was a form of bride service associated with marriage. A man would work with his prospective bride’s family so that they could ascertain his hunting ability.

Polygyny—the marriage of one man to more than one woman at the same time—was found throughout the region. Polygyny tended to be sororal, that is, a man would usually marry sisters. Sisters generally got along better than unrelated women.

The Northern Shoshone did not distinguish between siblings and cousins. Thus when a man married two sisters, this did not mean that the women had the same parents. Similarly, when Sacajawea—the Shoshone woman who was with the U.S. Corps of Discovery in the early 1800s—encountered her brother in Montana, in European terminology this man could have been her brother, or more likely, her cousin. To the Shoshone there was no difference between “brother” and “cousin.”

Among the Northern Shoshone, in instances where there was matrilocal residence, a man would marry an older sister and then would have sexual access to her younger sisters. He might be considered to be married to the younger sisters if they liked him. According to Julian Steward:

“But so long as all lived in the same tipi the distinction between marriage and nonmarriage to all the sisters was slight.”

In instances of non-sororal polygyny, each of the wives would usually have her own lodge.

Among some of the Indian tribes of the Great Basin, such as the Northern Paiute and the Shoshone, a woman would sometimes marry a set of brothers – a practice called fraternal polyandry by anthropologists. This appears to be a response to sparse, scattered populations and the difficulty in finding eligible mates. There were also some instances of polyandry involving two cousins as well as unrelated males. While polyandry usually involved two males, there were a few instances of polyandry with three males.

In some instances, polyandry was fraternal and temporary. According to Julian Steward:

“A woman married the oldest brother first, then, if she liked a younger brother, took him into the household and allowed him sex privileges.”

At a later time, the younger brother would acquire his own wife, preferably a sister to his polyandrous wife.

One common marriage practice among several groups was for a brother and sister to marry a sister and brother. Each of the couples would occupy their own house. Among the Lemhi Shoshone this was called navutiyugwin (“Sitting opposite one another”).

Among many of the Great Basin groups there was a preference for pseudo-cross-cousin marriage: marriage between a man and his mother’s brother’s stepdaughter or with his father’s sister’s stepdaughter. Historian John Heaton) reports:

“Marriage to a pseudo cross cousin allowed for the maintenance of reciprocal relationships among families within a kin group while also ensuring the infusion of outside ‘blood.’”

Children Among the Indian Nations of the Great Basin

Marriage Among the Southern Plains Tribes