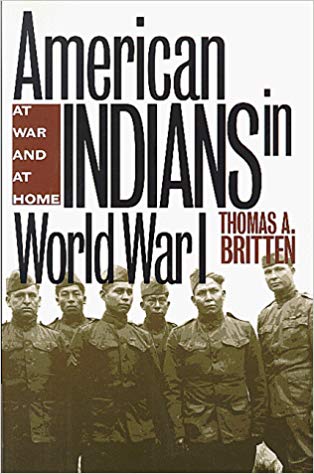 In 1914, the nations of Europe began the conflict which would become known as the Great War and later as World War I.  In 1917, President Woodrow Wilson called for the United States to enter what he called “the war to end all wars” and “to make the world safe for democracy.” The military estimated that a million men would be needed for the war and in the first six weeks following the declaration of war only 73,000 men volunteered. In response, Congress implemented a draft and 2.8 million men were called to service. American Indians, however, were not citizens and could not be drafted. Many Indians volunteered for service.

Members of Congress, the media (the New York Times), and others advocated investing $800,000 of Jackson Barnett’s (Creek) money in Liberty Loan Bonds to help the war effort. However, the Department of the Interior, acting as Barnett’s guardian, was hesitant as the request was not coming from Barnett himself.

In California, the Round Valley Indians wanted to show their support for the War through Red Cross work—making hospital garments, surgical dressings, and Christmas boxes. Their Indian agent, however, excluded them from these activities. Historian Jason Charles Newman, in an article in News from Native California, reports:

“Local whites apparently wanted neither to include the Indians in their organization nor to assist them in forming their own chapter.”

Indian feelings were further inflamed when non-Indians attempted to exclude them from a parade to celebrate the end of a Liberty Loan drive to raise funds for the war. The Indian superintendent ignored Indian requests for full participation in the parade and restricted them to a single float. In addition, the superintendent put the Indian service flag at the end of the parade.

The Indians called a general meeting of the community and demanded that the agent be present and explain his treatment of them. Approximately 25% of the Round Valley Indian Community attended the meeting, and while the agent drove by the meeting hall several times, he failed to attend. Realizing that no apology was forthcoming, the Indians organized themselves and petitioned Washington to investigate the matter. They also petitioned the Red Cross to grant them a charter as an independent Indian chapter, but the paperwork granting such a chapter was delayed until the end of the war.

The newsletter Wassaja, written by Yavapai physician Dr. Carlos Montezuma protested the American policy of having Indians register for the draft. He writes in an article reprinted in Talking Back to Civilization: Indian Voices from the Progressive Era:

“They are not citizens. They have fewer privileges than have foreigners. They are wards of the United States of America without their consent or the chance of protest on their part.”

In Idaho, a thousand or more Shoshone gathered in council at the Fort Hall Reservation to discuss the requirement that Indian men register for the draft. Garfield Pocatello and others advised the young men not to enroll. About 50 men fled to the hills to avoid the draft. When it was explained to the chiefs that the draft was more like a census and that as noncitizens they could not be drafted, the chiefs agreed to cooperate. As a result, all but 14 eligible Shoshone men on the reservation were enrolled.

In Utah, the Shoshone living in Box Elder County refused to register for the draft. The local sheriff arrested the draft resisters and had them enrolled.