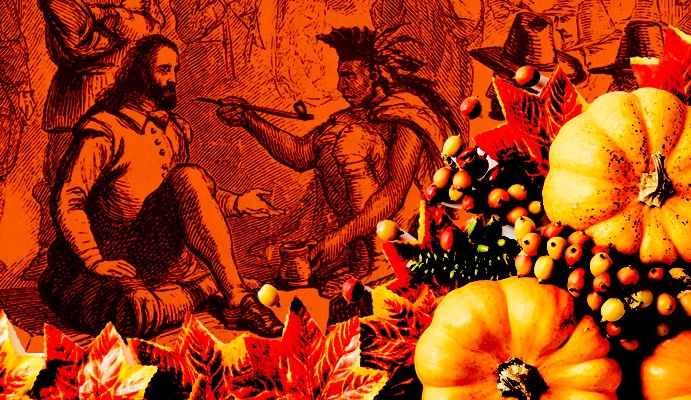 and out of that heightened violence came the massacre for which Thanksgiving is named.

William B. Newell, a Penobscot Indian and former chairman of the Anthropology department at the University of Connecticut, says that the first official Thanksgiving Day celebrated the massacre of 700 Indian men, women and children during one of their religious ceremonies. “Thanksgiving Day” was first proclaimed by the Governor of the then Massachusetts Bay Colony in 1637 to commemorate the massacre of 700 men, women and children who were celebrating their annual Green Corn Dance…Thanksgiving Day to the, “in their own house”, Newell stated.

—–The very next day the governor declared a Thanksgiving Day…..For the next 100 years, every Thanksgiving Day ordained by a Governor was in honor of the bloody victory, thanking God that the battle had been won.”

Without having the book or being able to see it online, the proclamation appears, according to Richard Drinnon, to have come from William Bradford. I’ll be buying the book. “‘Thanksgiving Day’” was first proclaimed by the Governor of the then Massachusetts Bay Colony in 1637,” as from Newell, which was John Winthrop.

But “William Bradford became the governor of Plymouth after the first governor died in 1621.”

And in “1631, John Winthrop (1588-1649) became the first elected official in America-governor of the Massachusetts Bay Colony.”

They were both Puritans, they both probably said it.

The original Thanksgiving was marked by prayer and thanks for the untimely deaths of most of the Wampanoag Tribe due to smallpox contracted from earlier European visitors. Thus when the Pilgrims arrived they found the fields already cleared and planted, and they called them their own.

He was inspired to issue a proclamation: “This day forth shall be a day of celebration and thanksgiving for subduing the Pequots.” The authentic Thanksgiving Day was born.

The following source cites Drinnon in the next paragraph, so I assume the following came from Drinnon as well.

Jump 129 years to 1621, year of the supposed “first Thanksgiving.” There is not much documentation of that event, but surviving Indians do not trust the myth. Natives were already dying like flies thanks to European-borne diseases. The Pequot tribe reportedly numbered 8,000 when the Pilgrims arrived, but disease had reduced their population to 1,500 by 1637, when the first, officially proclaimed, all-Pilgrim “Thanksgiving” took place. At that feast, the whites of New England celebrated their massacre of the Pequots. “This day forth shall be a day of celebration and thanksgiving for subduing the Pequots,” read Massachusetts Bay Governor John Winthrop’s proclamation. Few Pequots survived.

The first Official Thanksgiving was gratitude for genocide in 1637, and in 1676 – 1677 “a day was set apart for public thanksgiving,” because nearly all of them were exterminated by then.

3 See Sylvester, op. cit., ii, p. 457, for expedients adopted by Massachusetts to obtain money to defend the frontiers. Yet the number killed and sold, along with those who escaped, practically destroyed the warring Indians. According to the Massachusetts Records of 1676-1677 a day was set apart for public thanksgiving, because, among other things of moment, “there now scarce remains a name or family of them (the Indians) but are either slain, captivated or fled.”

In their victory, the settlers launched an all-out genocide against the remaining Native people. The Massachusetts government offered 20 shillings bounty for every Indian scalp, and 40 shillings for every prisoner who could be sold into slavery. Soldiers were allowed to enslave any Indian woman or child under 14 they could capture. The “Praying Indians” who had converted to Christianity and fought on the side of the European troops were accused of shooting into the treetops during battles with “hostiles.” They were enslaved or killed. Other “peaceful” Indians of Dartmouth and Dover were invited to negotiate or seek refuge at trading posts – and were sold onto slave ships.

After King Philip’s War, there were almost no Indians left free in the northern British colonies. A colonist wrote from Manhattan’s New York colony: “There is now but few Indians upon the island and those few no ways hurtful. It is to be admired how strangely they have decreased by the hand of God, since the English first settled in these parts.” In Massachusetts, the colonists declared a “day of public thanksgiving” in 1676, saying, “there now scarce remains a name or family of them [the Indians] but are either slain, captivated or fled.”

Fifty-five years after the original Thanksgiving Day, the Puritans had destroyed the generous Wampanoag and all other neighboring tribes. The Wampanoag chief King Philip was beheaded. His head was stuck on a pole in Plymouth, where the skull still hung on display 24 years later.

Furthermore, the continuing historical context of the Massacre for which Thanksgiving is named was in the context of “slave-producing wars in New England.”

The war consisted of two battles: the Mistick Fight, and the Swamp Fight. In the first of these two events, but seven captives were taken.1 In the second, the Swamp Fight, about one hundred and eighty captives were taken.2 Two of the sachems taken in the Swamp Fight were spared, on promise that they guide the English to the retreat of Sassacus. The other men captives, some twenty or thirty in number, were put to death.3 The remaining captives, consisting of about eighty women and children, were divided. Some were given to the soldiers, whether gratis or for pay does not appear. Thirty were given to the Narraganset who were allies of the English, forty-eight were sent to Massachusetts and the remainder were assigned to Connecticut.4

During the years 1675 and 1676, one finds mention of the sale of Indians in Plymouth in groups of about a hundred,2 fifty-seven,3 three,4 one hundred and sixty,5 ten,6 and one.7 From June 25, 1675 to September 23, 1676, the records show the sale by the Plymouth colonial authorities of one hundred and eighty-eight Indians.8

In the Massachusetts Bay colony a similar disposal of captives was accomplished. On one occasion about two hundred were transported and sold.9 There is extant a paper written by Daniel Gookin in 1676, one item of which is as follows: “a list of the Indian children that came in with John of Packachooge.” The list shows twenty-one boys and eleven girls distributed throughout the colony.10

Hence, the continuing historical context of the Massacre for which Thanksgiving is named: “In Massachusetts, the colonists declared a ‘day of public thanksgiving’ in 1676, saying, “there now scarce remains a name or family of them [the Indians] but are either slain, captivated or fled.”

A cold question arises about whether “the sale of Indians in Plymouth” was at least silently appreciated by the colony. Did they? Were they glad “the Indians” were almost exterminated? They never actually said they were far as I know.

It all began when Philip (called Metacom by his own people), the leader of the Wampanoag Indians, led attacks against English towns in the colony of Plymouth. The war spread quickly, pitting a loose confederation of southeastern Algonquians against a coalition of English colonists. While it raged, colonial armies pursued enemy Indians through the swamps and woods of New England, and Indians attacked English farms and towns from Narragansett Bay to the Connecticut River Valley. Both sides, in fact, had pursued the war seemingly without restraint, killing women and children, torturing captives, and mutilating the dead. The fighting ended after Philip was shot, quartered, and beheaded in August 1676.

How many were glad Saddam Hussein was hung? How many would be glad if all the perpetrators of 9-11 were shot? One last question, how many realize that then and now,  colonialism always brings more violence as “a colonizing European nation was asserting political jurisdiction.”

…But tribal rivalries and wars were relatively infrequent prior to Puritan settlement (compared to the number of wars in Europe)…Neither would have increased if it were not that a colonizing European nation was asserting political jurisdiction, in the name of God, over indigenous New England societies…When thus threatened with the usurpation of their own rights, as native tribes had been threatened years before by them, Puritans came to the defense of a system of government that was similar, in important ways, to the native governments that they had always defined as savage and uncivilized…

Some have lost careers over stating the obvious: the US brings it upon itself.

Howard Zinn. A People’s History Of The United States. p. 682.

We are not hated because we practice democracy, value freedom, or uphold human rights. We are hated because our government denies these things to people in Third World countries whose resources are coveted by our multinational corporations. That hatred we have sown has come back to haunt us in the form of terrorism.

“And in secret places in our minds, in places we don’t talk about, we can’t handle the truth.”

William Bradford, in his famous History of the Plymouth Plantation, celebrated the Pequot massacre:

“Those that scraped the fire were slaine with the sword; some hewed to peeces, others rune throw with their rapiers, so as they were quickly dispatchte, and very few escapted. It was conceived they thus destroyed about 400 at this time. It was a fearful sight to see them thus frying in the fyer, and the streams of blood quenching the same, and horrible was the stincke and sente there of, but the victory seemed a sweete sacrifice, and they gave the prayers thereof to God, who had wrought so wonderfully for them, thus to inclose their enemise in their hands, and give them so speedy a victory over so proud and insulting an enimie.”

The timeline itself along with basic knowledge of the Pilgrim’s Puritan’s religious beliefs exposes the fact that historically speaking, Thanksgiving was literally about gratitude for genocide.

The Massacre For Which Thanksgiving Is Named

The Massacre For Which Thanksgiving Is Named