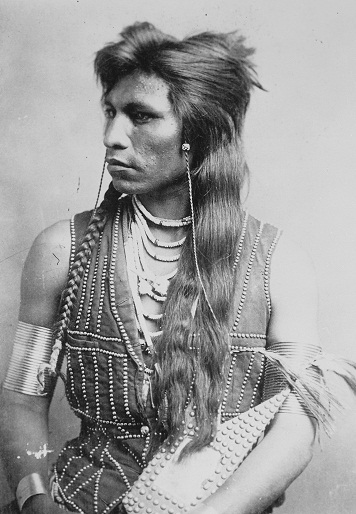 In American society today there is some debate over gender and sexual identities. While there are some who are that there are only genders-male and female-and this should define the natural order of things, there are others who point out the wide variety of sexual orientation. To add to this discussion, I would like to add some information about Native American gender identities.

Indian cultures in general did not view gender/sexuality as being restricted to just two categories. While some modern writers speak of the Indian berdache as a third gender, it’s not quite that simple. The berdache was not a third category, but a way of referring to a continuum of human behavior that doesn’t fit neatly into the European notions of male and female.

As usual, I would like to point out that there were more than 500 distinct Indian cultures in North American prior to the European invasion, so making broad generalizations about the role of the berdache in traditional Indian society is risky. In what follows below I will make some generalizations about the berdache among the Northern Plains tribes-groups such as the Blackfoot, Crow, Cheyenne, Gros Ventre, Sioux, and others.

Like most cultures, the Indian nations of the Northern Plains defined specific roles for men and for women. In general, women gathered wild plant foods while the men were hunters and warriors. However, the roles were not rigid: there were many women who hunted and went on war parties and were still considered women. Just doing things normally done by the opposite gender did not make one into a berdache.

Among most of the Northern Plains cultures, there were some boys who preferred the company of girls and who eventually dressed as girls. The ethnographic literature about these individuals generally refers to them as berdaches.  Among the Crow, at about the age of 10-12 a young boy might take on the female clothing and female work. As a male berdache he was accepted in Crow society and might marry a man. In describing the male berdache, Edwin Thompson Denig, writing in 1856, says: “He is not to be distinguished in any way from the women.” However, in Crow society the berdache was neither male nor female, but an individual who had characteristics of both.

Since the berdache was neither male nor female, it many of the Northern Plains tribes the berdache had an important role in the ceremonial life of the tribe. In the Sun Dance, for example, there were certain rituals which could be performed only by a berdache.

While much of the literature about the role of the berdache in Northern Plains cultures focuses on men, there were also many instances of women who wore men’s clothing and took men’s roles. Some of these women married other women, some were warriors, and some were chiefs. Among the Blackfoot, women who took on the aggressive roles of men were referred as “manly hearted women.” They would usually begin to take on these roles as teenagers when they would join war parties. They would wear male dress, marry women, and often obtain leadership positions as warriors and/or spiritual leaders.

What was/is the American Indian berdache? Too often there is an attempt to use European categories to understand the berdache and thus to assume that they were homosexual. Undoubtedly, some were, but the role of the berdache was not a sexual one. Sometimes the berdache has been described as a transvestite or as a transgender people. Again, this is not a totally true image of who they were. Gender and sexuality in Indian cultures allowed a wide range of variation and the concept of the berdache simply shows that cultures exist which allow a great deal of freedom with regard to gender identity.