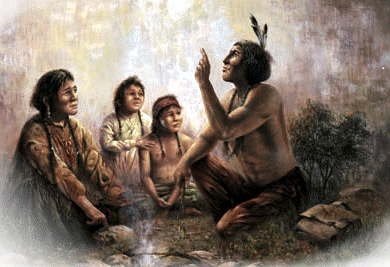 This is the second in a three-part series on the Dark Ages of American Indian Religious Freedom.

In this diary, we are going to look at how the United States outlawed American Indian religions.

In 1883, the Secretary of the Interior reported that the heathen practices of American Indians had to be eliminated. He instructed the Commissioner of Indian Affairs to compel the discontinuance of dances and feasts. He asked Congress for greater power to deal with the Indian spiritual leaders (often called “medicine men”). He asked that steps be taken to compel “these impostors to abandon this deception and discontinue their practices.”

Following the recommendations of the Secretary of the Interior, missionaries, and other influential “friends of the Indian,” the United States formally outlawed “pagan” ceremonies in 1884. Indians who were found guilty of participating in traditional religious ceremonies were to be imprisoned for 30 days. This was seen as an important step in the destruction of the Indian way of life.

In 1892, Congress strengthened the law against Indian religions. Under the new regulations, Indians who openly advocated Indian beliefs, those who performed religious dances, and those involved in religious ceremonies were to be imprisoned.

On a regular basis, the Secretary of the Interior and the Commissioner of Indian Affairs reminded the Indian agents of the need to suppress Indian religions. The Bureau of Indian Affairs (BIA) in 1902 told reservation agents: “You are therefore directed to induce your male Indians to cut their hair.” According to the Commissioner of Indian Affairs: “The wearing of short hair by the males will be a great step in advance, and will certainly hasten their progress toward civilization.”  Under the new guidelines, Indian men with long hair were to be denied rations. If they still refused to cut their hair, “short confinement in the guardhouse at hard labor with shorn locks, should furnish a cure.”

On the Hopi Reservation, the Indian agent forced a number of men to cut their hair. The agent disregarded the ceremonial purpose of long hair. Hopi men traditionally grew their hair long in the back as a symbol of the falling rain for which they prayed. For the Hopi, for a man to have his hair cut during the growing season was tantamount to asking that the corn stop growing.

Indian agents were also instructed to stop Indians from using face paint. According to the Commissioner of Indian Affairs: “The use of this paint leads to many disease of the eyes among those Indians who paint. Persons who have given considerable thought and investigation to the subject are satisfied that this custom causes the majority of cases of blindness among the Indians of the United States.”

In addition, Indian dances and feasts were to be prohibited. According to the BIA: “Feasts are simply subterfuges to cover degrading acts and to disguise immoral purposes.”