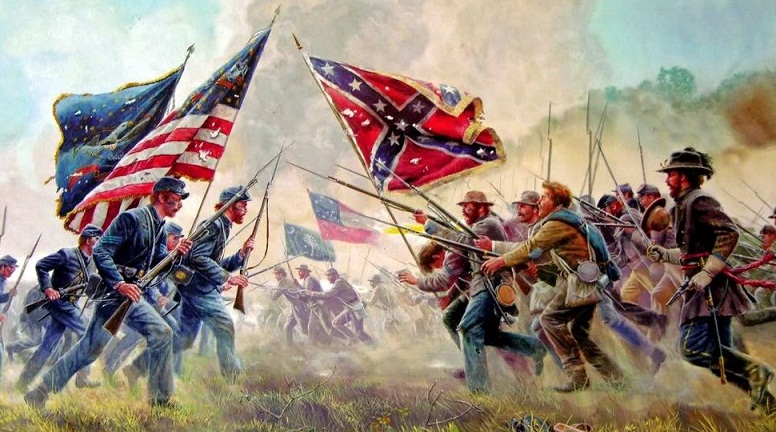 Following the Civil War, attitudes regarding race in the South hardened. Reinforced by pseudo-scientific reports that claimed that Whites were a superior race, and by religious claims that Whites had been chosen by God to have dominion over others, the Southern states passed laws regarding miscegenation and other forms of racial mixing (including segregated schooling, housing, and health care). Race functioned to rationalize thoughts and behavior; to explain both human behavior and social status as being innate.

As a biracial South developed, the Indians were placed in a difficult position. Many had been slave owners prior to the Civil War and had attitudes toward African Americans that were similar to Southern Americans. On the other hand, the Southern Americans viewed the world as having only two kinds of people: Whites and Others (including African-Americans, Coloreds, and Indians). Thus in the eyes of many non-Indians, Indians in the South were the same as African-Americans: they were an inferior race and were to be segregated from White Americans. The greatest challenge faced by the Native people who remained in the South was that racism distinguished only between black and white. The dominant white society often refused to acknowledge any distinction among ‘people of color’ and placed African Americans and Native Americans in the same category. This biracial obsession denied the distinct cultures, histories, and problems of Native people.

The concept of Indians as a distinct race is neither an Indian concept nor an ancient European one. Indians were originally seen by Europeans not as racial inferiors but as people in a less developed state of culture, not unlike English peasants before the Romans arrived. When the Creek first came into contact with Europeans and for several generations afterward, they had no concept of race. Any child of a Creek mother was also Creek, sharing her town and clan affiliations.

Many Southern Americans strongly believed (and some still continue to believe) that all Indians had voluntarily left the South and relocated to Oklahoma. Therefore, anyone who claimed to be Indian was obviously a fraud, perhaps a Black trying to pass as non-Black. Therefore, it was easy to dismiss claims of Indianness and to assign these people to the inferior legal status of “colored.”

The American federal government also reinforced the concepts of race which had been reported by some of the pseudo-scientific studies of the nineteenth century. In order to determine who was Indian, the federal government adopted and promoted the idea of blood quantum. According to the blood quantum theory, the amount of ‘blood’ a person possesses from a particular race determines the degree to which that person resembles and behaves like other members of that race.

Blood quantum is based on the idea that race, and therefore behavior, is somehow carried in the blood, and that an Indian who has some European “blood” would be superior to a “full-blood” Indian. From the viewpoint of the federal government, a person with less than one-half or one-quarter Indian “blood” could be considered non-Indian. However, the social rules regarding miscegenation clearly indicate that a single drop of black blood made the individual black.

In the century following the Civil War, Indian people in the Southeast had to fight to carve out for themselves an identity that retained their Indian culture in an environment that denied this heritage. In Mississippi, for example, the Choctaw refused to be lumped with the black community and they constantly sought to assert their separate Indian identity. Among the Mississippi Choctaw, native dress, language, dances, music, games, and crafts have had an important function as symbols of a distinct ethnic identity, and this function has served to foster their survival.

American Indians and the Civil War