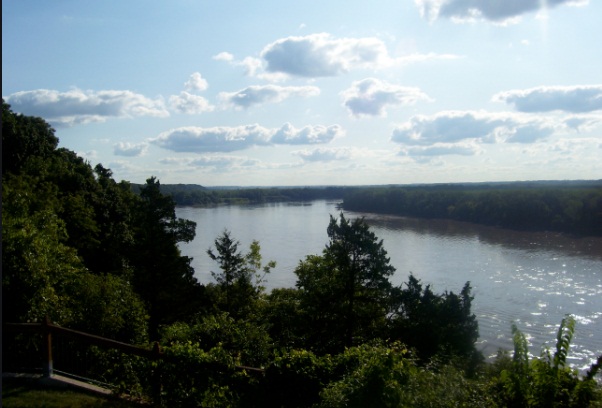 The Missouri River has an important place in American history. In 1803 the United States purchased the rights to govern the Louisiana Territory, an area which spread from the Mississippi River west to the headwaters of the Missouri River. The Lewis and Clark expedition was then sent out to find the headwaters of the Missouri, to make contact with the Indians, and to report on the economic potential for the new territory. Soon after, the Missouri became the highway for non-Indian fur traders, explorers, miners, and settlers.

In 1944 Congress approved the Pick-Sloan Plan for flood control and navigation on the Missouri River. The primary beneficiaries of the Pick-Sloan plan were non-Indian farmers. The Plan involved the construction of four dams – Garrison, Fort Randall, Oahe, and Big Bend – which would impact twenty-three Indian reservations and result in the forced relocation of nearly 1,000 Indian families. Many Indian leaders would later charge that the project selected Indian lands for dam sites rather than non-Indian lands. In carrying out the plan, the Army Corps of Engineers negotiated settlements with the Indians, ignoring tribal sovereignty, Indian law, and treaty rights.

The Bureau of Indian Affairs was fully informed about the project and its impact on Indian reservations. The BIA made no objections to the project while it was debated in Congress. None of the tribes affected by the project were consulted about it.

Former Commissioner of Indian Affairs Philleo Nash would later say that Pick-Sloan “caused more damage to Indian land than any other public works project in America.” The plan ignored Indian water rights and the Winters Doctrine.

In 1946 the Army Corps of Engineers began construction on the Fort Randall Dam in South Dakota. The dam flooded 22,091 acres of Yankton Sioux land and dislocated 136 families. The reservoir also covered Fort Thompson, the largest community on the Crow Creek Reservation. As a result, the Bureau of Indian Affairs Offices were moved to Pierre, South Dakota and the Indian Health Service facilities were moved to Chamberlain, South Dakota. By placing these two services – BIA and HIS – in two different communities it became more difficult and less convenient for the Indians needing these services.

The Army Corps of Engineers also entered the Fort Berthold Reservation in North Dakota to begin construction of the Garrison Dam. The Three Affiliated Tribes of the Reservation — Mandan, Hidatsa, Arikara — had not been informed of the project. The dam would flood every acre of productive land on the Fort Berthold reservation.

When the tribes informed the Department of Interior that the homes and lands of 349 families with 1,544 people were to be flooded, the BIA simply told them to start looking for new homes.

While the Army Corps of Engineers altered the project’s specifications without Congressional authorization to protect the non-Indian town of Williston, they did nothing to protect the Indian communities. The Fort Berthold tribes protested to Congress and managed to stop the funding for the project until a settlement was reached.

At one reservation conference attended by General Pick of the Army Corps of Engineers, Indians in full ceremonial dress denounced the talks. General Pick flew into a rage, canceled the negotiations, and repudiated all of the agreements which had been reached as of that time. By his failure to understand the situation, the general clearly revealed his basic ignorance of the people with whom he was dealing. General Pick’s contention that the Indians were belligerently uncooperative was used by him as a reason to dictate his own settlement terms to Congress.

In 1948 the Army Corps of Engineers began construction of Oahe Dam in South Dakota. The Oahe Dam would destroy more Indian land than any other public works project in America.  The project destroyed 90 percent of the timber land on the Standing Rock Sioux and Cheyenne River Sioux reservations as well as the most valuable rangeland, most of the gardens and cultivated areas, and the wild fruit and wildlife resources.

The Department of the Interior (of which the BIA is a part) signed the final agreement in 1948 for the Pick-Sloan plan to build dams which would flood the Fort Berthold Reservation in North Dakota. While the Pick-Sloan plan took great care not to drown any non-Indian towns along the Missouri River, it flooded 155,000 acres of the most fertile Indian farmland in the Great Plains.

The agreement denied Indians the right to use the reservoir shoreline for hunting, fishing, grazing, or other purposes. It also rejected tribal requests for irrigation development.

The Standing Rock Sioux in 1951 attempted to hire their own attorney, to be paid out of tribal funds, to help in the negotiations regarding lands taken in the Pick-Sloan dam projects. The tribe wanted legal counsel which would be totally independent from the politics of the Department of the Interior. However, Commissioner of Indian Affairs Dillon Meyer rejected their choice of an attorney and allowed only a one-year contract.

The attorney selected by the tribe, James Curry, was an outspoken critic of the BIA and was one of a number of Indian claims lawyers against whom Meyer had a personal vendetta. The tribe protested Meyer’s decision to the Department of Interior. The Department of the Interior did nothing as Meyer continued to publicly attack Curry.

Federal representatives from the Army Corps of Engineers and the BIA met with the Standing Rock Sioux and the Cheyenne River Sioux in 1952 to seek an agreement over lands taken from them under the Pick-Sloan dam projects on the Missouri River.

The Standing Rock Sioux asked that they be allowed to spend $500 to have their attorney attend the conference with them. Commissioner of Indian Affairs Dillon Meyer refused the request, calling it a “highjacking game.” The Secretary of the Interior overruled Meyer’s decision.

According to one representative from the Cheyenne River Sioux: “This is not a happy occasion. We are here to participate in the gutting of our reservation.”

Representatives of the Cheyenne River Sioux in South Dakota testified before Congress in 1954 regarding land claims from the Oahe Dam of the Pick-Sloan Project. The representatives paid their own way for the BIA would allow them only five days in Washington which was not enough time to cut through the federal bureaucracy. The representatives also realized that Congress was more comfortable hearing from Indian stereotypes than real Indians. Thus, Little Cloud was instructed to speak in Lakota at the hearings, and Chasing Hawk was to translate his remarks into broken English, even though both men spoke their adopted language fluently. Members of Congress were delighted.

In the end, Congress awarded the Cheyenne River Sioux nearly $11 million which was $13 million less what the Indians felt was just compensation for their losses.

In 1958 the Army Corps of Engineers filed suit to condemn Standing Rock Sioux land which was needed for the Oahe Dam. Tribal attorneys countered with a motion to dismiss because Congress had not given specific authorization to condemn tribal land. Support for the Indian’s case was provided in the 1868 Sioux Treaty which stated that land can be taken only upon payment of just compensation and the consent of adult tribal membership.

Judge George Mickelson, a former South Dakota governor, found for the tribe stating: “It is clear to this Court that Congress has never provided the requisite authority to the Secretary of the Army to condemn this tribal land. Such action is wholly repugnant to the entire history of Congressional and judicial treatment of Indians.”

Two weeks after the Oahe Dam was closed and the reservoir began filling, Congress passed a settlement which provided a little more than $12 million to the Standing Rock Sioux. This was $14 million less than they had requested.

In 1959 the Army Corps of Engineers began work on the Big Bend Dam in South Dakota. The project was located on lands belonging to the Crow Creek Sioux and the Lower Brule Sioux and would take 21,026 acres of Sioux land. The reservoir would flood the town of Lower Brule.

In addition, the reservoir created by the dam would flood the reservation lands which had the greatest potential for irrigation and thus destroy the possibility of implementing plans proposed by the BIA and the Bureau of Reclamation for irrigation projects on the two reservations.

The Army Corps of Engineers filed a condemnation suit against the Crow Creek Sioux and the Lower Brulé Sioux in 1960 to obtain land for their Big Bend Project. Congress had not specially designated any power of eminent domain to the Army and the Army ignored the Court ruling regarding the Standing Rock Sioux. The Army Corps of Engineers was allowed to take title to the land. Neither the tribes themselves, their lawyers, the BIA, nor any of the Indian rights organizations protested this decision.

In South Dakota, the Army Corps of Engineers delivered payment to the Standing Rock Sioux for lands needed for the Oahe Dam project in 1960. In the midst of a fierce winter, the tribe was also given an immediate eviction notice. Indian families were forced to gather their possessions and leave the land. However, the government had not yet made available funds for the construction of new homes and the people were forced to live in trailers which they had to maintain at their own expense. The eviction date established by the Corps had been an arbitrary one. Tribal members could have remained in their old homes until the more favorable months of summer without interfering with the completion of the Oahe project.

Under 1944 legislation dealing with the electricity generated by the Pick-Sloan dams, Indians should have qualified as preferential low-cost power customers. However, the government simply ignored this and the Indians did not receive low cost electricity from the dams located on their land. It took Congress nearly 40 years to recognize that a wrong had been committed. Therefore, in 1982 authorized the Departments of Energy and Interior to make Pick-Sloan pumping power available to the Standing Rock, Cheyenne River, Crow Creek, Lower Brule, and Omaha Reservations in South Dakota and Nebraska. However, Congress did not provide for the construction of new transmission lines to these Indian projects. Existing lines owned and operated by Rural Electrification Administration cooperatives were unable to give the tribes a reduced delivery rate.

In 1983 the state of South Dakota attempted to exercise exclusive jurisdiction over hunting and fishing in the Fort Randall and Big Bend Dam project areas on the Lower Brulé Reservation. The Court of Appeals ruled in favor of the Indians and as a result both the state and the tribe enforced their regulations within the area. The state, however, was limited to enforcement over non-Indians.

In 1988 the Cheyenne River Sioux Tribe announced that they would no longer recognize South Dakota hunting licenses in the Oahe Dam project area and that hunters must obtain a tribal hunting license.

Congress authorized in 1992 nearly $91 million to the Standing Rock Sioux in compensation for damages caused by the Oahe Dam project. The legislation also established an irrigation area on the reservation and transferred the administrative jurisdiction of the land taken in the project from the Secretary of the Army (Corps of Engineers) to the Secretary of the Interior (Bureau of Indian Affairs).

In 1999 Lakota protesters established a camp on LaFramboise Island in the Missouri River in South Dakota. The camp was in protest of the Water Resources and Development Act (WRDA) which would give treaty lands to the state of South Dakota. The lands were taken from the Cheyenne River and Lower Brulé Sioux tribes by the Army Corps of Engineers in 1947 as a part of the Pick-Sloan dam project. The land was no longer needed by the Corps.

In 2000 the Army Corps of Engineers agreed to delay raising water levels in Lake Francis Case in South Dakota to allow the Yankton Sioux Tribe to recover scattered human remains. The Indian burial site was uncovered when the water levels behind Fort Randall Dam dropped. Supposedly the Army Corps of Engineers had relocated all burials in 1950 before the reservoir filled.