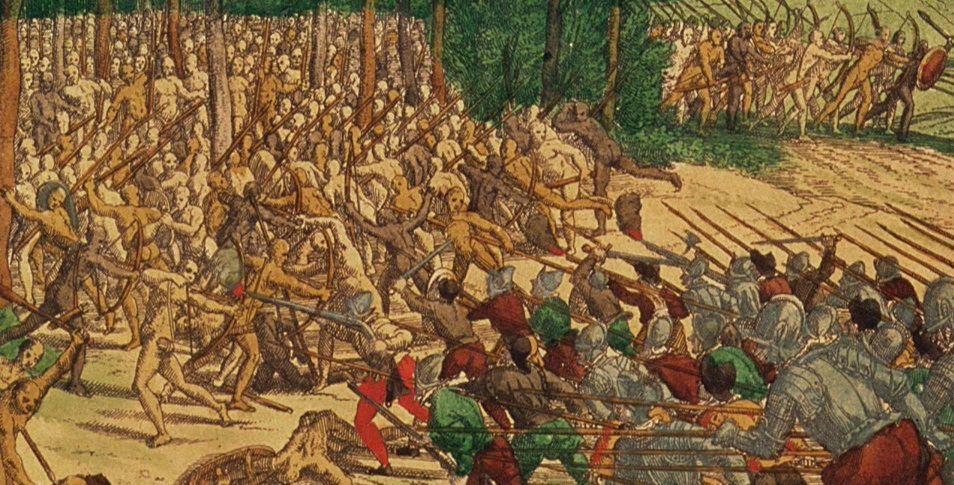 Seventeenth century life under Spanish rule was not pleasant for the Pueblos in New Mexico. The Franciscans attempted to brutally suppress all vestiges of Native American religion: they burned religious paraphernalia, they whipped religious leaders, and they destroyed the kivas (underground ceremonial chambers). In 1680, the Pueblo spiritual leader Popé led a revolt against the Spanish. By coordinating and uniting several Pueblos, the Indians defeated the Spanish and drove them out of the area.

Popé, a charismatic spiritual leader who had been whipped and humiliated by the Spanish, was a brilliant organizer. He brought together the war chiefs from diverse Pueblos and directed them in a coordinated action against the Spanish. The principal war chiefs who acted with Popé were El Jaca of Taos, Don Luis Tupatú of Picurís, Alonso Catiti of Santo Domingo, Luis Cuniju of Jemez, Antonio Bolsas the spokesperson for the Tanos Pueblos, Cristóbal Yope of San Lázaro, and Keres leader Altonio Malacate.

Following Popé’s instructions, the Indians first captured the Spanish horses and mules, thus making it impossible for the Spanish to communicate rapidly with one another. The revolt was also timed to precede the arrival of the caravan which brought supplies to the Spanish settlers from Mexico. At this time, the Spanish would be low on weapons and ammunition.

In their rage against Spanish Catholicism, the Pueblos killed the Franciscan friars, mutilated their bodies, and destroyed the churches. Of the 33 Franciscan friars in the territory, 21 were killed in the revolt. In addition, some 400 Spanish soldiers and colonists were killed. Most of the colonists, however, were given an opportunity to flee as the primary purpose of the Pueblo Revolt was to destroy the mission system.  The revolt was the act of a people determined to reject Christian civilization because it posed a direct threat to their integrated religion and culture. The Pueblos were not cultures which venerated war: they did not fight for war honors, but to repel the Spanish. They could have slaughtered all of the Spanish colonists, but they preferred a Spanish exodus.

Pueblo rage was focused on the Franciscans, not on the Spanish colonists. While the Franciscans had upset the Pueblos by their destruction of sacred objects, they would later ponder the causes of the Pueblo Revolt and conclude that the only thing they were guilty of was selfless love for the Indians.

Following the revolt, the Pueblos began to re-learn their traditions, which had been suppressed under the Spanish. There were, however, some changes. For centuries, Pueblo governments had been based upon a tradition of government by consent. Popé, however, began acting more like a European warlord than a traditional Pueblo leader.

Mission churches were torn down and the kivas (underground ceremonial chambers which had been filled in by the Spanish) were dug out once again. Popé forbade the use of the Spanish language and Spanish baptismal names and destroyed objects associated with Spanish Christian culture.  Popé declared that the Christian god had been made of rotten wood and was dead at last. All vestiges, all reminders of it had to be obliterated. To remove the taint of Christian baptism, a ritual washing with yucca-root was prescribed.

Among the Hopi in Arizona, the kivas were rebuilt using materials from the destroyed churches. The Hopi also began to use church bells in some of their ceremonies. The Hopis thus employed their own form of ‘superposition’ to reestablish their own religion’s predominance.

With the Pueblo revolt, Indians acquired their own horses. The Pueblos traded some of the horses with other tribes and the use of the horse began to spread north, leading to a new way of life for the Indians on the Great Plains.

Following the Pueblo Revolt, a number of Pueblos became concerned about possible Spanish retaliation. Following earlier revolts, such as the 1649 revolt by the Jemez, the Spanish had brutally retaliated against the Indians. Thus, fearing Spanish reprisals, the pueblo of Sandia in New Mexico was abandoned and the people established the pueblo of Payupki near the Hopi village of Mishongnovi in Arizona. In Arizona, the Hopi village of Walpi, fearing Spanish reprisals from the Pueblo Revolt, moved from a lower terrace to a more defensive position on top of First Mesa.

Not all of the Pueblos joined in the revolt. The Tiwa-speaking pueblo of Isleta did not join the Pueblo Revolt and they allowed 1,500 Spanish settlers to take refuge in the pueblo before fleeing south into Chihuahua.

The first Spanish attempt to re-conquer the Pueblos came in 1681. With a force of 146 soldiers, they invaded Pueblo territory. At Isleta they found a thriving community with the church in ruins. The villagers told the Spanish that they did not want any visitors. The Spanish, however, were not deterred and forced their way into the pueblo. Here the pueblo leaders approached their guests peacefully. The Spanish response to the peaceful greeting was first to baptize the babies born during the past year. They then destroyed the masks, ceremonial clothing, prayer sticks, and kachina dolls by throwing them into a flaming pyre. The Spanish then sent messengers upriver to the northern villages with promises of pardon and demands for submission.

A Spanish force of about 70 soldiers under the command of Captain Mendoza then traveled north. They encountered about a dozen empty pueblos. They destroyed all ceremonial items and set fire to the villagers’ stores of winter food. At Santo Domingo, the Spanish were confronted by a band of Pueblo warriors. After some initial skirmishes, the two groups held council. Speaking for the Pueblos was Catiti, Popé’s assistant. Catiti promised to bring in the other villagers in a few days. The Spanish settled down in the nearby village of Cochiti. Here they discovered that Catiti’s promise was really a delaying tactic to give the warriors from the northern villages time to assemble. The Spanish hastily retreated south to warn the main body of Spanish soldiers.

The Spanish found that most of the people in Isleta had left the pueblo to join the northern warriors and so they burned the village, killed 385 people, and returned to El Paso.

In 1687, the Spanish attacked Santa Ana Pueblo and burned it. The survivors united with people from Zia Pueblo and established a village on Red Mesa.

In 1688, Popé, the spiritual leader from San Juan who masterminded the Pueblo Revolt of 1680, died. Tupatu assumed Pueblo leadership.

In 1688, the Spanish made a foray into Pueblo country to find out who led the 1680 revolt. The Spaniards failed to find out the names of the leaders, but they burned a number of Pueblo villages and carried out a policy of killing and plundering.

The successful Spanish re-conquest of the Pueblos began in 1689 with the capture of Zia. After a daylong attack, the Spanish overran the fortified Pueblo, sacked it, and burned it. Over 600 Indians were killed and 70 were taken captive. Among those captured was Bartolomé de Ojeda, a Pueblo war captain who had been educated by the Franciscans.

The wounded Ojeda was carried back to El Paso where he gave valuable testimony about the Pueblos. He then joined in the Spanish re-conquest as a leader of the Indian auxiliaries and an interpreter for the Spanish.

In 1691, Pueblo representatives from Jemez, Zia, Santa Ana, San Felipe, and Pecos asked the Spanish to return. This request was made in response to increased plundering by the Apache and Navajo who were now on horseback. Before the Pueblo Revolt in 1680, the Spanish with their guns and horses had deterred these raids.