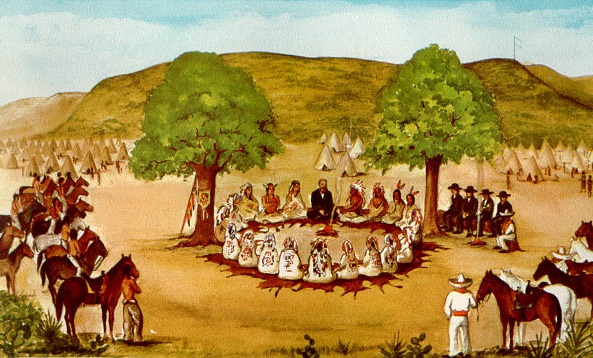 With the new standards recently adopted by the Texas Board of Education which appear to emphasize the historical accomplishments of English-speaking Christians, I thought it might be interesting to look at some of the forgotten (or at least ignored) history of Texas: the relationship between the short-lived Republic of Texas and some of the Indian nations within its territory.

In an earlier diary I looked at Texas and the Cherokee and in this diary I’m going to look at the Comanche.

Prior to the birth of the Republic of Texas, the Comanche had actively raided against all intruders into their lands: the Spanish, Mexicans, American expatriates, and other tribes. They had a reputation as fierce warriors and the very name “Comanche” often struck a chord of fear in the hearts of non-Indians.

Like the Mexicans before them, the Texans at times attempted to negotiate treaties with the Comanche and at other times they tried to militarily drive them out or exterminate them.

In 1838, the Comanche signed a treaty with the Republic of Texas. The treaty called for the Comanche to surrender their sovereignty and to visit the Texas capital on the second Monday every October to talk with the President. Signing the treaty for the Comanche were Muguara, Muestyah (also known as Puestia), and Muhy.

The following year, a Lipan Apache hunting party found a Comanche village on a tributary of the San Saba River and reported it to the Texans. A group of 60 Texans and 16 Lipan Apache under the leadership of Chief Castro attacked the village, catching the Comanche by surprise. When the Texans stopped to reload, their horses were run off and they were surrounded by several hundred Comanche. At a pause in the firing, the Comanche approached the Texans under a white flag. They proposed to trade their Texan prisoners for the Comanche taken in the initial attack. However, the Comanche prisoners had already been killed by the Lipan Apache.

In 1839, a force of 60 Texas Rangers attacked a band of about 20 Comanche buffalo hunters. The Comanche fled and easily outdistanced the Rangers. The Rangers, however, continued their pursuit and soon their captain noticed that the Comanche seemed to be getting more numerous. The Ranger captain became alarmed at this observation. He halted the reckless pursuit and turned about in retreat. Too late he discovered that he had now made the ultimate error in Comanche warfare. The 20 Comanche buffalo hunters were now 200 warriors who were in pursuit of the Rangers. From a ravine, the Rangers were able to fend off the Comanche because they are able to shoot from cover. While the Comanche warriors could easily have wiped out the whole company, the cost in blood was too high.

In 1840, an incident known as the Council House Affair took place in San Antonio. Comanche leader Muguara with 65 men, women, and children came to San Antonio under a flag of truce. The Comanche came to trade, bringing with them many horses and furs and one captive. The Texans, on the other hand, wanted to meet to discuss the release of women and children who had been captured by the Comanche during the past 10 years. Many of the children who had been raised as Comanche had no desire to return to their biological parents’ people.

Twelve Comanche men, described by the Texans as chiefs, met with the Texans in the Council House on the plaza. When the Texans demanded that more captives be returned, Muguara denied that his band had any more. Soldiers surrounded the council house and attempted to take the Comanche prisoners to exchange for prisoners held by the Comanche. As the Comanche tried to escape, the Texans killed them. In the end, 35 Comanche were killed and 27 women and children and two old men were taken captive.

One Comanche woman was sent back to the Comanche camps to secure the release of the other captives. She returned with two Texan and five Mexican captives whom she attempted to trade for her relatives. The Texans released an equal number of Comanche captives in exchange.

The Comanche were outraged by the killing of their chiefs under a flag of truce. In Comanche culture, a council was sacred. To talk in time of peace, especially after smoking the pipe, meant to tell the truth. To fight in council, however, was considered offensive to the spirit world.

In retaliation for the Texan betrayal of the council, Buffalo Hump led a war party of 500 warriors through Texas, burning homes and killing hundreds.

The Comanche surrounded the town of Victoria. They killed a number of black slaves who were working in the fields outside of the town. While some of the houses were attacked and set on fire, the Comanche decided that the cost of the battle was too much and continued on the war path toward the Gulf.

The Comanche warriors then attacked the small port settlement of Linnville. Here they captured a number of women, including the granddaughter of Daniel Boone. In Linnville, the Comanche found a warehouse filled with goods and they spent the day looting the town. They packed great quantities of goods on pack mules and began the slow journey home.

The Texas Rangers and Texas Militia caught up with the slow-moving Comanche column at Plum Creek. While the Comanche warriors managed to avoid a fight for a while, the Texans soon attacked the main body and routed them. Eighty warriors were killed and the Comanche lose all of their loot.

In another incident in 1840, a Comanche group encountered a small patrol of Texas Rangers on Walker’s Creek near the Guadalupe River. The Comanche dismounted and shouted taunts at the Texans. The Texans attempted to slip around and attack the Comanche from the rear, but quickly found themselves surrounded and having to fight their way out. Fending off the Comanche from a refuge in the woods, the Rangers managed to kill the Comanche chief. The Comanche retreated and were pursued by the Rangers.

The Walker’s Creek fight is purported to be the first combat test of the Colt revolver. A number of versions of the story see this battle as the first time the Comanche warriors had encountered the new weapon and that it was so effective that the warriors retreated. However, many of the Comanche warriors and leaders had actually seen the Colt revolver demonstrated the year before. In addition, the reliability of the new revolvers was somewhat less than the Colt myth would have it.

In 1842, Texas made another attempt at securing peace with the Comanche. The Texans sent a delegation to find Comanche chief Pahayuko and to persuade him to come to a peace conference at Bird’s Fort. The delegation included the Waco chief Acahquash and his wife, several Delaware guides, and two Comanche children. The delegation was not, however, well organized and was therefore delayed in making contact with the Comanche.

After an initial meeting with the Texans, Pahayuko went into council with the chiefs and warriors. A number of the warriors, particularly those who had lost relatives at the Council House fight, advocated retaliation first, then peace. Acahquash addressed the council and explained that the head chief of Texas was not the same as the chief who ruled at the time of the Council House fight and that the new chief wished friendship with the Comanche.

The following day, the leader of the Texas delegation was allowed to meet with the council. He presented a pipe (the Alamo Council Pipe), but Pahayuko refused to smoke with him. However, at the end of the council, Pahayuko agreed to meet with the Texans again, this time with all of the Comanche chiefs, in order to negotiate a firm and lasting peace.

In 1844, Delaware scouts John Conner and Jim Shaw made contact with the Comanche on the Clear Fork of the Bazos. They invited Comanche chiefs Old Owl and Buffalo Hump to meet with the Texans in council. While Old Own readily agreed, Buffalo Hump was somewhat reluctant.

The Comanche met in council at Tehuacana Creek near present-day Waco with Texas President Houston. As a result of the council, a pledge of mutual friendship was made. Buffalo Hump said: “What I came here for was to hear the words of peace. I have heard them and all is right; peace is peace.”

When Texas joined the United States in 1846 it was clearly understood that Texas was to be for Texans: Indians were not welcome in the new state. The problems of war and peace with the Comanche now became the concerns of the federal government, as well as the task of persuading the Comanche to settle on a reservation in Oklahoma.