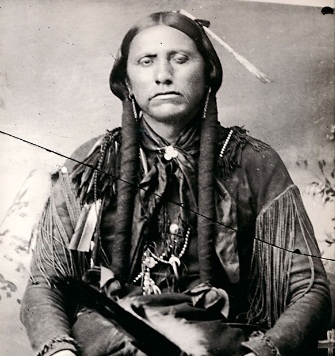 Seventh-graders in Texas are supposed to be introduced to the historical figure Quanah Parker, a Comanche military leader and a leader in the Native American church. Teaching history in Texas, and in many other parts of the United States, is intended to instill in the students a sense of patriotism, loyalty, and nationalism.

Cynthia Dunbar of the Texas State Board of Education has stated:

We as a nation were intended by God to be a light set on a hill to serve as a beacon of hope and Christian charity to a lost and dying world.

The Board has written new educational standards to emphasize the Christian and English-speaking heritage of Texas and of the United States. The story of Quanah Parker seems to be at odds with these standards unless a new biography is invented for him. His mother, Cynthia Parker, is to be omitted from the seventh-grade education. As a non-Indian captured by the Indians she resisted repatriation and preferred to remain with her adopted people. This does not fit into the image of American superiority that some people would like to believe.

What follows is a short biography of Quanah Parker. This biography has not been authorized by the Texas Board of Education.

Perhaps the most famous Comanche chief is Quanah Parker, the son of Cynthia Ann Parker and Chief Peta Nocono. He was born about 1845. As a youngster, Quanah was noted for his superb horse riding abilities, his bravery, and his leadership.

Quanah’s brother and his father were killed by Texans and his mother was kidnapped by them and died among them in captivity. Thus Quanah had some hatred of the Euroamericans who were invading Comanche lands.

Quanah joined the Kwahadie band whose territory was in the Texas panhandle area. In 1867 he became one of the band’s war chiefs.

While the Medicine Lodge Treaty of 1867 called for the Comanche (meaning all of the Comanche bands, including those not represented at the treaty council) to take up residence and be confined to a reservation between the Washita and Red Rivers in present-day Oklahoma, some of the bands refused to give up their nomadic ways. As a consequence, the army moved in and began a campaign to pacify the southern plains. This war was aimed primarily at the Southern Cheyenne, Southern Arapaho, Kiowa, and Comanche.

In 1868, the army attacked and defeated a combined group of Kiowa and Comanche at the Battle of Soldier Spring. The soldiers burned the tipis and destroyed the Indians’ food, driving the Indians out on the plains to die in the winter weather.

In 1871, 600 American soldiers marched against the Comanche in Texas and Oklahoma. The military objective was to find and defeat the bands under the leadership of Quanah Parker, He Bear, Wild Horse, and Bull Elk who had refused to sign the 1867 Medicine Lodge treaty and move them to the reservation.

In 1871, Quanah Parker led two charges against the army at the Battle of the Staked Plain in the Texas panhandle. In the first charge, Quanah and his warriors hit the army camp at Rock Station where they stampeded and captured many army horses. In a second attack, Quanah’s warriors defeated a scouting party. The army called off their pursuit of the “hostile” bands until spring.

The following fall, the army defeated the Kotsoteka band under the leadership of Mow-way, killing at least 30 Comanche and capturing 124. However, the Kwahadie Comanche (including Quanah Parker) and the Kiowa remained at large.

The free Indian bands on the Southern Plains also had a second concern: non-Indian buffalo hunters were slaughtering thousands of buffalo on Indian land and the buffalo were becoming scarce. In 1874, the Indians began a war known as the Buffalo War or the Red River War against these buffalo hunters. To assure the participation of the Southern Cheyenne, Southern Arapaho, and Kiowa in the war, Comanche medicineman Isatai held a Sun Dance, a ceremony which was not traditional to the Comanche but which was (and still is) important to the other tribes.

Quanah Parker was one of the leaders of an allied force of about 700 Indian warriors who attacked 28 buffalo hunters at Adobe Walls in the Texas panhandle. The American buffalo hunters, however, were armed with long range repeating rifles and managed to kill 15 warriors and repel the attack.

During the months following the battle at Adobe Walls, the Comanche, as well as the Kiowa under the leadership of Lone Wolf, Mamanti, and Big Bow, and the Southern Cheyenne under the leadership of Bull Bear, carried out a series of raids against American settlements. In response, the U.S. Army launched a massive campaign. At the battle of Duro Canyon, the army captured or killed most of the Indian’s horses (estimated at 1,500) and destroyed most of their tipis.

In 1875, Quanah Parker’s Comanche, starving and war-weary, turned themselves in to the reservation. This marked the beginning of a new period in Quanah’s life.

On the reservation, Quanah identified himself with his mother’s American last name (Parker) and became useful because of his fluency in English and Spanish. By 1878, he was the spokesman for the Kwahadie band when it met in council with the Indian agents. He advocated the leasing of surplus pasture areas for grazing rights and for rights-of-way, and he worked deals with American cattlemen. He became a prosperous rancher.

From 1886 to 1898, Quanah Parker was one of three judges on the Court of Indian Offenses for the Comanche, Kiowa, Apache, and Wichita. One of the American concerns regarding the Indians at this time was polygyny-the marriage of one man to more than one woman at a time-and Quanah Parker had five wives. This caused friction with the American Indian agents and so he eventually lost his job as judge.

In 1890 Quanah Parker was recognized by the American government as the principal chief of all the Comanche bands. As the main Comanche leader, he not only negotiated with treaty councils, but he also made nearly 20 trips to Washington, D.C. to negotiate Indian issues.

As with all Oklahoma tribes during this time, the Comanche were under pressure by the government to divest themselves of their lands through allotment or sale. In 1892, Quanah Parker signed an agreement to sell “surplus” reservation lands. Many of the Comanche disagreed with this sale and they blamed Quanah Parker for the loss of reservation lands.

In 1905, President Theodore Roosevelt asked the Bureau of Indian Affairs to provide “a touch of color” for his inaugural parade by providing some Indians. The BIA provided Geronimo (Apache), Quanah Parker (Comanche), American Horse (Sioux), Hollow Horn Bear (Sioux), Little Plume (Blackfoot), and Buckskin Charley (Ute). The old men rode painted ponies in full regalia. Behind them came a troop of marching Carlisle Indian students. Throughout the parade route, they were greeted with war whoops and similar derisive shouts from the crowd.

To counteract some of the misconceptions about the use of peyote in the Native American Church, Quanah Parker met with the Medical Committee of the Oklahoma State Constitutional Convention in 1909. He managed to convince them that peyote was not harmful and that it was necessary for their religious services.

Quanah Parker died in 1911. He was buried next to his mother’s grave in a funeral which was attended by about 1,500 people.

The Republic of Texas and the Comanche Indians

The Republic of Texas and the Cherokee Indians

The Kickapoo and the War Against Texas