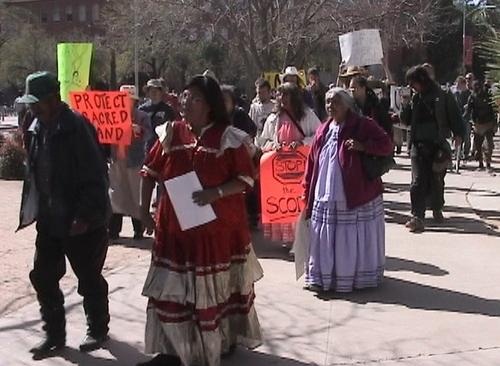 For many Native American nations there are certain geographic places which have special spiritual meanings. These sacred places are often portals to the spirit worlds. For the Apache in Arizona, one of these sacred places is Mount Graham: this place is called Dzil Nchaa Si An (Big Seated Mountain) and is mentioned in 32 of the sacred songs which have been handed down through the oral tradition for many generations. It is here that the Ga’an, the guardian spirits of the Apache, live.

In 1873, Mount Graham was removed from the boundaries of the San Carlos Reservation and placed in public domain. The spiritual value of Mount Graham to the Apache was not considered. This action set the stage for conflict a century later.

In 1984, the University of Arizona and the Vatican selected Mount Graham as a site for a complex of 18 telescopes. The fact that this is a sacred place for the Apache was not taken into consideration. To get around the legal barriers of the American Indian Religious Freedoms Act, the University hired a lobbying firm to put pressure on Congress to remove this, and other, roadblocks.  The area in question is administered by the U.S. Forest Service.

The Vatican has an observatory staff which is officially support by the Vatican City State. The Vatican Observatory Foundation is supported by private donations. One of the important duties of the church is to maintain an accurate calendar and this requires astronomical observations. Hence the involvement of the Vatican with astronomy. The first Vatican observatory was established in 1774.

Congress passed the Arizona-Idaho Conservation Act in 1988. In response to lobbying by the University of Arizona and the Vatican, the Act included a provision to allow the construction of three telescopes on Mount Graham without having to comply with the American Indian Religious Freedoms Act or with environmental laws.

The following year the Apache Survival Coalition was started by Ola Cassadore-Davis, the daughter of Apache spiritual leader Phillip Cassadore. The purpose of the Coalition was to save Dzil Nchaa Si An from desecration by a telescope complex to be built by the University of Arizona and the Vatican.

In 1991, the San Carlos Apache Tribe passed a resolution stating that Mount Graham is sacred to them. Furthermore, the resolution stated that the tribe supported the efforts of the Apache Survival Coalition to protect the religious and cultural beliefs of the tribe.

Following the declarations of the sacredness of Mount Graham by the Apache Survival Coalition and the San Carlos Apache Tribe, the Vatican in 1991declared that Mt. Graham was not sacred because it lacked religious shrines. Jesuit Father George Coyne, director of the Vatican Observatory, indicated that he could not find an authentic Apache who thought the mountain was sacred. Father Coyne stated that to convince him that the mountain was sacred he would need to see evidence of shrines and that he would not accept Apache oral history or statements by Apache-speaking Euro-American anthropologists.

Father Coyne further declared that Apache beliefs were “a kind of religiosity to which I cannot subscribe and which must be suppressed with all the force we can muster.”

The Arizona Republic (Phoenix, Arizona) reports that the Jesuit Father Charles W. Polzer calls opposition to the construction of the telescope complex on top of Mount Graham  “part of a Jewish conspiracy” and comes from the Jewish lawyers of the American Civil Liberties Union who are out to undermine and destroy the Catholic Church.

In spite of opposition by the San Carlos Apache tribal council, Apache spiritual leaders, and environmental groups, actual construction of the project began in 1991.

The San Carlos Apache tribal council in 1993 reaffirmed reso¬lutions opposing the construction of the telescope on Mount Graham. The council resolution stated that the telescope “constitutes a display of profound disrespect for a cherished feature of our original homeland as well as a serious violation of our tradi¬tional religious beliefs.”

After meeting with Apache elders and spiritual leaders at the San Carlos Apache Reservation, the National Council of Churches in 1995 passed a resolution calling for the removal of a telescope from Mount Graham.

Beginning in 1998, the University of Arizona began requiring Indians to obtain prayer permits before they crossed the top of Mount Graham near the University’s telescopes. The University’s prayer policy required that the permit be requested at least two business days before the visit and that it include a description of where on the mountain the prayers will take place. Only people who were enrolled members of federally recognized tribes were allowed to pray.

In 1999, the University of Notre Dame, a Catholic university, announced that it would also build a telescope on Mount Graham. The University president claimed that he was unaware that Mount Graham was sacred to the Apache and that the Apache opposed the desecration of this sacred place. This was in spite of the fact that the building of telescopes on this sacred mountain by the University of Arizona and the Vatican was a controversial issue and had been the subject of many news stories.

In 1999, the White Mountain Apache tribal council passed a resolution urging the U.S. Forest Service to “honor its duties to protect the physical integrity of Mount Graham and its long-standing and ongoing historical, cultural and religious importance to many Apaches.”

Realizing that they were making little headway with the bureaucracies of the American government (Department of the Interior and Department of Agriculture) and Congress, the Apaches took their cause to the United Nations in 1999. Ola Cassadore Davis testified before the Sub-Commission on Prevention of Discrimination and Protection of Minorities. She stated:

We Apache wish to bring to the people of this world a better understanding of Indian people, in order that we are able to preserve and freely live by our traditional culture and religious beliefs.

She asked that the special use permit by the Department of Agriculture Forest Service be terminated. She concluded:

In conclusion, we Apache would respectfully urge this body of the United Nations to recognize and acknowledge that the disrespect and suffering caused by the nations and governments mentioned above be terminated forthwith. We Apache petition you for a resolution consistent with the National Congress of American Indians of 1993, 1995 and July 1999. They stated that the public interest in protecting Apache culture is compelling, and that the U.S. Secretary of Agriculture should accordingly require the prompt removal of the telescopes from Mount Graham.

The Mount Graham International Observatory is home to three telescopes: the Vatican Advanced Technology Telescope, the Heinrich Hertz Submillimeter Telescope, and the Large Binocular Telescope. On their website, their version of the  history of Mount Graham focuses on James Duncan Graham and mentions the Spanish Conquistadores. There is no mention of the Apache. Their section on the legal actions necessary for the building of the complex mentions environmental concerns, but there is no mention of the Apache spiritual concerns.

The telescopes sit on land which has been leased from the Forest Service and the lease must be regularly renewed. Efforts by American Indian people and various environmental groups have so far been unsuccessful in convincing the Forest Service to deny the renewal of the leases.