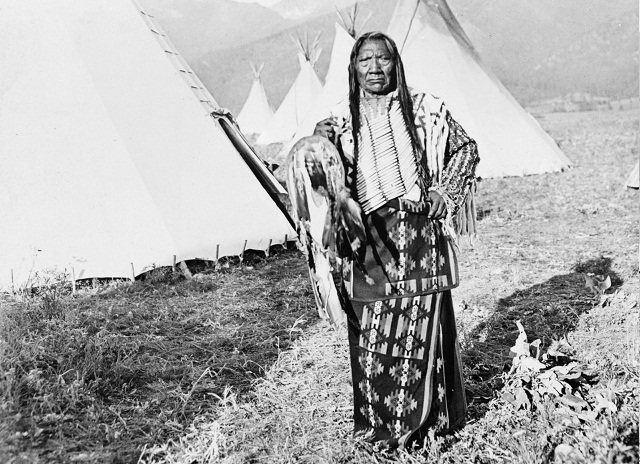 During the nineteenth century the United States pursued a policy toward American Indian nations which mandated their removal from their homelands if these homelands were desired by non-Indians. It was not uncommon for this removal to be accomplished through military force and for men, women, children, and elders to be force-marched for hundreds of miles without adequate provisions. Sometimes, the American government forced removal on a single nation several times.

While the most famous removal was the Cherokee Trail of Tears, many other Indians-ranging from the Choctaw, Chickasaw, and Creek in the southeast to the Ponca and Cheyenne on the Plains to the Navajo in the Southwest-also went through an often brutal removal process. Often the Indian nations which were removed were friendly toward the United States and had served as American allies. One of the least known removals involves an Indian nation known as the Flathead or Bitterroot Salish of Western Montana.

In 1855, territorial governor Isaac Stevens met in treaty council with the Bitterroot Salish (Flathead), Pend d’Oreilles, and Kootenai in western Montana. Governor Stevens considered these tribes to be unimportant but wanted to consolidate them, together with other tribes, on a single reservation. While the Flathead and the Pend d’Oreilles were both Salish-speaking tribes with a great deal of cultural similarity, the Kootenai speak an unrelated language and did not have a peaceful relationship with the Flathead. Stevens and the other Americans were unaware, or unconcerned, that the Kootenai were not related to the other tribes.

All of the tribes were friendly with the United States and had not committed any acts of violence against the Americans who intruded into their country. Big Canoe, a Pend d’Oreilles, pointed out that his people had offered the hand of friendship to the Americans since first contact. He questioned why there was a need for a treaty, saying that treaties were used to settle differences between enemies. While he still offered friendship, he felt that the Americans did not have the right to come into his territory and take away his lands.

When Flathead Chief Victor refused to sign the treaty until it included provisions for a separate reservation for his people in the Bitterroot Valley,  Governor Stevens called him an old woman and a dog. Victor replied: “I sit quiet and before me you give my land away.” Governor Stevens ambiguously promised them two reservations, a promise he knew he could not keep.

The treaty promised the tribes that the United States would provide them with provisions as part of the payment for the lands which they ceded. However, it was not uncommon for these provisions to arrive late or not arrive at all.

Following the Civil War, many non-Indians began to invade the Bitterroot Valley and establish farms in spite of the fact that this was prohibited by the 1855 treaty and they did not have title to the land. Soon the squatters began to resent the Flathead farmers and to covet their lands as well. The government refused to honor the treaty and soon took a position that the rights of the recently arrived squatters were superior to those of the Indians who have lived in the valley for thousands of years.

In 1866, the Indian agent for Western Montana called a council with the Flathead to discuss the non-Indian encroachment on their lands. The agent discussed with Chief Victor and about 100 other tribal members the possibility of their removal to the Jocko Reservation about 100 miles to the north. While no solutions were attained, the agent considered the council to be successful.

In the meantime, the Indian agents for the Flathead in the Bitterroot Valley reported to the Indian Office on the agricultural potential of the area. They noted that American settlers were moving into the area and recommended to the government that the Flathead be removed.

In 1869, Flathead Chief Victor dictated a letter to the Commissioner of Indian Affairs in which he discussed the problems facing the Flathead in the Bitterroot Valley. He asked for justice for his people.

At the same time that Chief Victor was asking for justice, the petition of the non-Indian settlers in the Bitterroot Valley requesting the removal of the Flathead was forwarded to the Secretary of the Interior. The petition simply argued that it would cost less to remove the Indians than to move the non-Indian squatters out of the area. The squatters, who had settled the land illegally, would have to be paid for their improvements, while the Indians could simply be removed with no concern regarding any improvements or rights to the land.

In response to government concerns, General Alfred Sully, the Superintendent of Indian Affairs for Montana Territory, negotiated a new treaty with the Flathead. While Sully favored the removal of the Flathead from the Bitterroot Valley, the Flathead were determined to remain in their homeland. The new treaty, however, permitted both Indians and non-Indians to live in the Bitterroot. The non-Indians objected to the treaty as it allowed the Indians to remain in the Valley. Influential Montana citizens complained, stating that each Indian family should get a farm and all other land be turned over to non-Indian settlers.

Under the new treaty, the Flathead were to have a reduced reservation. The treaty allowed non-Indian squatters to remain in the valley, but required that any new settlers obtain permission from the chiefs and the Indian agent. The treaty also promised each Indian family a wooden house and a farm wagon for every two families. The Flathead retained their right to hunt, fish, and gather in any reservation area not fenced. The treaty was signed by chiefs Victor, Arlee, and Joseph.

Non-Indians throughout Montana condemned the treaty. The prevailing attitude among non-Indians was that no land should be retained by Indians. As a result, the treaty was not ratified by the U.S. Senate.

In 1870, the non-Indian settlers ignored the treaty with the Flathead and asked the government to evict the Flathead. There were now more than a thousand Americans in the Bitterroot. Chief Charlo insisted that the Flathead had never relinquished their rights to the valley.

At this time most of the Flathead in the Bitterroot Valley were engaged in agriculture. Their farms produced 5,000 bushels of wheat, 650 bushels of potatoes, and 60 bushels of corn. With regard to livestock, they had 600 head of cattle, 100 hogs, and about 1,100 horses. They were seen as more agricultural than other tribes.

In 1871, seven Flathead chiefs met with Father Jerome D’Aste and dictated a letter to President Ulysses S. Grant concerning the situation in the Bitterroot Valley. The chiefs were concerned about non-Indian settlement as well as the growing liquor trade which the non-Indians promoted.

In response to the concerns regarding the non-Indian settlement in the Bitterroot Valley,  President Grant authorized the eviction of the Flathead from their homeland. James A. Garfield was then sent to persuade Chief Charlo to move to the reservation. Grant’s action was based on reports that only a handful of Indians-some reports cited only three Indian farms in the valley-were holding up the development of a fertile valley.

The following year, Congressman (and later President) James A. Garfield visited the Bitterroot Valley to negotiate the withdrawal of the Flathead from the valley and their resettlement on the Jocko (Flathead) Reservation. The Flathead were reluctant to enter into a new agreement since none of the provisions of their 1855 Treaty of Hellgate had been carried out by the government.

Two sub-chiefs, Arlee and Adolph, signed the agreement, but Chief Charlo refused to sign. Everyone  who was at the council witnessed his refusal. His signature is not on the original on file in the Department of the Interior; neither did it appear on the duplicate left with the Indians.

Somehow, as if by magic, Charlo’s mark appeared on the document. When Charlo complained about the blatant forgery, the United States simply appointed Arlee as the head chief, ignoring the fact that Arlee was not Flathead, but Nez Perce. When confronted with the evidence of the blatant forgery, Garfield claimed that he had reported the document signed because he thought that Charlo would agree and sign it once he saw that his people were actually being moved. The Flathead Culture Committee would later report:

“This apparent fraud caused the Chieftain (Charlo) to become further embittered against the whiteman who had taken his country and was making a strange life for him.”

The two sub-chiefs selected the Jocko Valley as the future home of the Flathead. This location was not particularly favorable for agriculture, but it offered other advantages which seemed more important to the Indians. These advantages included good pasture, running streams and an abundance of timber.

In 1873, a report on the Flathead in the Bitterroot Valley found that most of the non-Indian settlers in the area advocated the removal of the Indians to the Flathead Reservation. However, the report found little evidence of any crimes committed by the Flathead against the non-Indians.

In 1877, the Flathead friendship with the Americans was reaffirmed. During the Nez Perce War, Chief Looking Glass led his people into the Bitterroot Valley seeking refuge from the American army with their old friends and allies. When Looking Glass met with Flathead Chief Charlo, he extended his hand in friendship, but Charlo refused it. Charlo told him:

“Why should I shake hands with men whose hands are bloody? My hands are clean of blood.”

Chief Charlo visited Washington, D.C. in 1883. Charlo refused the gifts of the government which wanted his band to move from their ancient home in the Bitterroot to the Jocko (Flathead) Reservation. Finally, the Secretary of the Interior told him that his people could continue to live in the Valley as long as they lived in peace with the American settlers.

“In any event, deeply as we sympathize with these people, and deplore the manner in which Charlo has been treated, we are satisfied that the welfare of both the whites and the Indians in the Bitterroot Valley absolutely demands the removal of the latter to the Jocko reservation. Their presence in the valley is a continued source of danger and disgust.”

The following year, the Flathead make another attempt to get the federal government to listen to their side of the controversy. A delegation of Flathead chiefs-Charlo, Antoine Moise, John Hill, Abel-traveled to Washington, D.C. to meet with government officials about their removal from the Bitterroot Valley. Charlo indicated that his people were free to move if they so desired.

In 1884, a group of 18 families from Moiese’s Bitterroot Salish (Flathead) band moved to the Jocko Reservation where they were given houses.

In 1889, a drought wiped out the farms of the Flathead and their non-Indian neighbors in the Bitterroot Valley. With this disaster, Chief Charlo agreed to move his Flathead band to the reservation in the Jocko Valley.

“I will go. I and my children. My young men are becoming bad. They have no place to hunt. My women are hungry. For their sake I will go.”

To support their decision to move, the government promised to provide the Flathead with food. The government’s promised supplies did not arrive and starvation set in.

In 1891, Charlo’s band of Flathead are finally moved from the Bitterroot Valley to the reservation in the Jocko Valley. Charlo had been told that if he did not give up his lands and move that the soldiers would come for him. Finally, Charlo called his people together. They prayed together and then he announced that they would go. Several days later following an all night feast, the Salish assembled at dawn, loaded horses and wagons and started for the Jocko Reservation.

The Salish were well-received by the other Indians on the reservation. However, the government failed to provide the promised houses for those who made the move.