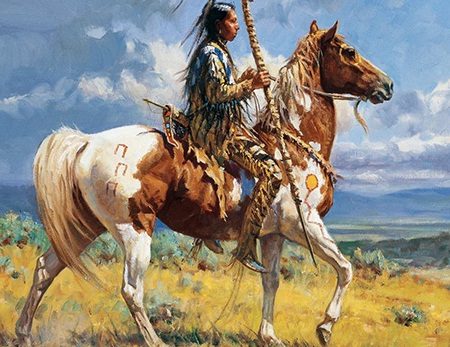 While the popular image of Plains Indians is that of the horse-mounted warrior and buffalo hunter, the horse as we know it today only came to this continent with the Europeans. It reached the Plains Indians and dramatically changed their ways of life several generations before the Americans invaded the area.

It should be pointed out that there had been an earlier horse in North America which the early Indian hunters, such as Clovis, had hunted. However, this early horse went extinct with many other large mammals about 8,000 years ago.

The modern horse spread into the Great Plains from the Spanish settlements in the southwest. While a number of horse-mounted Spanish explorers and gold-seekers had passed through New Mexico during the early 1500s, the horse was actually introduced to the area by the Spanish colonists in 1598. At this time, Juan de Oñate led a large colonizing party-129 soldiers and their families, 10 Franciscan missionaries, 83 wagons, 7,000 cattle, sheep, and goats-into New Mexico and established a colony at San Juan in the upper Rio Grande valley. The Spanish brought with them over 1,500 head of horse and mules: 1007 horses, 237 mares, 137 colts, and 91 mules.

Meeting with leaders from 30 pueblos, Oñate took formal possession of New Mexico for the Spanish and ignored possible Indian ownership of the land. The Indians were told that the Spanish had come to bring them knowledge of God and the Spanish King, on which depended the salvation of their souls and the continuation of the security of their homes. According to the official proceedings:

“Wherefore they should know that there is only one God, creator of heaven and earth, rewarder of the good, whom He takes to heaven, and punisher of the wicked, whom He sends to hell. This God and lord of all had two servants here on earth through whom He governed.”

From the viewpoint of the Spanish, Indians were a form of labor which could be exploited. The success of the Spanish colonies in the Americas was based on this exploitation. Repartimiento was the Spanish policy which gave the Spanish colonists the right to use native labor for religious education. Repartimiento functioned as a part of the Spanish mission system in both the Southwest and in the Southeast. Under this system, labor quotas and the conscription of people to serve on labor gangs were organized through the villages served by the missions (or, from an Indian viewpoint, the villages which served the missions).

Another important part of the Spanish policy was encomienda. This meant that Indian villages were “commended” to the care and protection of an encomendero, a Spaniard who could exact their labor, but as free men (technically) and for pay (technically). In fact the Indians were slaves and the encomenderos spoke of owning their Indians.

With this system of encomiendas or land grants, Spain granted a colonist a certain amount of land which gave the recipient the right to work the land and to collect tribute in the form of goods and services from the Indians who lived within the boundaries of the grants. Each Spanish hacienda had its corps of Indian serfs to till the fields, maintain the livestock, tend the house, and make whatever the master wanted to eat, to wear, or to sell in the growing trade with Mexico. In return for the grant, the colonist was expected to help convert the Indians to Christianity.

Since the Indians worked for the Spanish, this meant that they had to be taught the Spanish ways of farming and caring for the animals. While the Southwestern Indians had been farmers for more than a thousand years, livestock was new to them. From the Spanish they learned how to care for the horses, how to breed them, and how to ride them. They also learned how to make all of the accouterments-bridles, saddles-which were needed in using the horses.

The horse which the Spanish colonists brought with them was a descendent of the Barb-a Moorish horse that originated in North Africa-which had been interbred with Spanish horses during the Moorish occupation of Spain. This was a desert-bred horse that was tough and bred to live on desert grasses. It could cover vast distances between water holes. It was very different from the huge, heavy, grain-fed animal of northwestern Europe and the British Isles.

The breeding of horses in the Spanish occupied areas was regulated by the Council of the Indies. Spanish law also prohibited Indians from owning horses. While the Spanish law allowed the Indians to work around horses, they were not allowed to ride them. It was also forbidden to trade horses to the Indians.

While the Indians became peasants working for the Spanish, the Spanish viewed their own life in New Mexico as being very difficult. In 1608, the Spanish colonists and their Franciscan priests concluded that the area was not profitable and therefore should not be a part of the Spanish empire. They petitioned the Council of the Indies for permission to withdraw from the area. While Spanish authorities were inclined to grant the petition, the inflated reports regarding the number of Indian converts was a major concern. The Franciscans claimed a total of 7,000 converts at this time. If the Franciscans were to withdraw from the area, this would mean that the Indians would be allowed to lapse once again into barbarism. Thus the Spanish Crown decided to support the colonial efforts and to deny the petition.

During this early Spanish colonial period in New Mexico, there were raids by the “nomadic” Indians-Navajo and Apache-in which horses were captured. However, there are no reports of these Indians riding the horses. Without a basic understanding of how to care for a horse, the horse would appear to the Indians to be similar to an elk. Since elk were killed and eaten, it may be presumed that most of the captured horses were used for food rather than for riding.

In 1621, the Spanish governor in New Mexico gave the Spanish ranchers permission to use Pueblo men on horseback to tend the horse and cattle herds. When some of these men escaped from their Spanish vassalage, they took the horses-and the knowledge about how to care for them and ride them-with them. The first official record of horse-mounted Indians was in 1623 when Fray Benavides, a Franciscan, encountered a band of Gila Apache and reported that their war chief was riding a horse.

By 1640, some of the Spanish colonists in New Mexico were violating Spanish law by trading horses to the Apache in exchange for buffalo hides and other pelts. At this time, the Navajo and some of the Pueblos entered into an informal alliance to overthrow the Spanish. In some instances, Pueblo herders turned over their Spanish horse herds to the Navajo. As a result, the Navajo began to wage horse-mounted raids against both the Spanish and the Pueblos.

A fresh infusion of horses arrived in New Mexico in 1676 when the Franciscans sent Fray Ayala to New Spain to obtain several hundred horses.

In 1680, the Pueblos revolted against the Spanish and drove them out. As a result of this revolt, the large Spanish horse herds were traded from tribe to tribe and began their diffusion into the Great Plains.

Following trade routes from Taos Pueblo, the horse was traded to the Ute, traditional trading partners with Taos. From the Ute, the horse spread out in two directions: to the east and then north through the Comanche and to the west and north through the Paiute and the Shoshone. The Comanche, Paiute, and Shoshone are linguistic relatives of the Ute.

The Comanche moved east into the Southern Plains of Oklahoma and Texas and spread the horse into the Southern Plains tribes. The Comanche quickly became preeminent horse traders and horse-mounted warriors. Once they had acquired familiarity with the horse, the Comanche became well-known for their raids against the Spanish ranches in Texas and northern Mexico to obtain more horses. Years later, they would say that they allowed the Spanish to remain in Texas only to raise horses for them.

The Shoshone introduced the horse to the tribes of the Plateau-the Cayuse, the Nez Perce, and the Salish-speaking Flathead. With the horse, the Plateau tribes now crossed the Rocky Mountains to hunt buffalo in the Great Plains. This put them into conflict with some of the Northern Plains tribes, such as the Blackfoot.

It should be noted that when we talk about the diffusion of the modern horse, we are talking about more than the animal itself. If an Indian who had never seen a horse before were to encounter one in the wild, it would resemble a funny-looking elk. One does not ride an elk in Indian culture: instead, the elk is killed and eaten. Thus the coming of the horse into Indian cultures refers to the cultural package that must come with the horse if it is to be incorporated into the culture as a domesticated animal. This includes the knowledge about how to care for the horse, to ride it, and to make the accessories (saddles and bridles) that are needed.

Following the Spanish and Moorish custom, Indians mounted horses from the right side. As working animals, the horses were also trained to respond to their rider’s knees. This left the rider’s hands free.

Once the horse had diffused to the Plains, the Indians acquired additional horses by breeding them, by trading for them, and by sending raiding parties to capture them from other tribes and from non-Indians. While there were herds of wild horses on the plains, these wild horse herds were never an important source of horses for the Plains Indians. The wild horses were difficult to catch and to train, and they frequently died soon after captivity.

The horse enabled the Plains tribes to hunt buffalo over a larger area and this, in turn, brought the tribes into more conflict with one another. Prior to the horse, a tribe would cover only 50 miles or so during a hunt, but with the horse this expanded to 500 miles.  As a consequence, war became more frequent. Plains Indian warfare was most frequently carried out by small war parties, often 10 warriors or less. The purpose of this warfare was to capture horses and count coup. Counting coup involved different feats of bravery, often including touching an enemy warrior, taking the weapon from an enemy warrior, and stealing an enemy warrior’s war horse. Warfare rarely involved an entire tribe and was never conducted with the primary purpose of annihilating another people or converting them to a different religion.

Prior to the modern horse, the Plains Indian people had only one domesticated animal: the dog. In the traditional oral histories, the period of time before the coming of the horse is referred to as the dog days. During this time period, the dog served as a beast of burden, pulling a travois made of tipi poles on which many belongings had been placed.

With the adoption of the horse, the tipi became much larger. Since horses are significantly larger than dogs, they were able to pull a larger travois. Since the travois was made from tipi poles, this meant that the poles could be much longer. Prior to the horse, a typical tipi would be 10-12 feet in diameter and would stand about eight feet high at the center. With the acquisition of the horse, the tipi grew to be 20 or more feet in diameter and as tall as 30 feet at the top of its lodge poles.

Sacred Places in the Great Basin