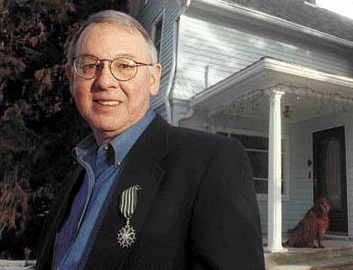 James Welch was a part of the renaissance of American Indian literature. When he began his writing, Indian authors were unknown. He later noted that D’Arcy McNickle’s The Surrounded was out of print at this time and that the other major Indian authors that are widely studied today were just beginning their careers.

Welch’s first novel was Winter in the Blood. In this book, the nameless protagonist is the grandson of a woman who survived the Baker Massacre in which the army had attacked a peaceful Blackfoot camp. Reactions to the book are mixed: non-Indians find it depressing, while Indian readers feel that it is very funny and an accurate representation of reservation life in Montana. He continues his descriptions of contemporary reservation life in Montana with his second novel, The Death of Jim Lonely.

In Fools Crow, Welch’s third novel, he sets the story in the nineteenth century. In the Blackfoot world at this time, the animals communicate with the people and people changed their names as their personalities grow.

With his fourth novel, The Indian Lawyer, Welch returns to the present day, but necessarily to the reservation. The hero, Sylvester Yellow Calf, is a contemporary man who simply happens to be an Indian. In this work, Welch breaks into the mystery genre, an area dominated by non-Indian writers even when their main characters are Indian and the mysteries are set on reservations.

During the last part of the nineteenth century, a number of American entrepreneurs, such as Buffalo Bill Cody, organized Indian and Wild West shows which toured in Europe. Some of the Indian performers in these shows got “lost” and did not return home. In The Heartsong of Changing Elk, Changing Elk gets sick in Marseilles and winds up alone in Europe. He has no money, he does not speak any European language, and he has no hope of returning home. The Heartsong of Changing Elk is Welch’s final novel.

Like D’Arcy McNickle, James Welch also wrote non-fiction. Killing Custer is an Indian view of the Indian wars in a historical context.