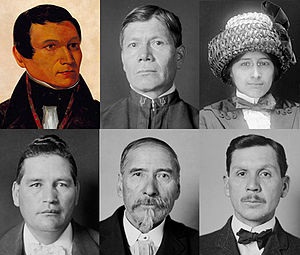 Long before the arrival of the English and French colonists in North America, five autonomous tribes had come together to form an alliance known as the League of Five Nations, or the Iroquois Confederacy. The five member nations were the Onondaga, the Cayuga, the Oneida, the Mohawk, and the Seneca. The purpose of the League was to renounce warfare among the member nations and to present a unified front against other nations. The League was created because of the spiritual vision of one man-Deganawida-and the speaking ability of another-Hiawatha. With the arrival of the French and English colonists in the American Northeast, the League became an important trading partner and power broker.

In 1710, the Tuscarora had the Susquahannock tribe carry a formal petition of peace to the English Provincial Government of Pennsylvania. As a result, two peace commissioners from Pennsylvania met with the Tuscarora chiefs as well as Opessa, the Shawnee head chief at Conestoga. The Tuscarora chiefs delivered eight wampum belts to the English. The first belt was from the women who asked that they might be able to fetch wood and water without danger. The second belt was from the children, including those not yet born, asking for room to play without the fear of death or slavery. The third belt was from the young men who ask to be able to hunt without the fear of death or slavery. The rest of the belts asked for a lasting peace and for a way of communicating with Pennsylvania.

The Pennsylvania commissioners did not give the requests a favorable reception. At this time, the English did not see the Tuscaroras as presenting any sort of threat. There was no war between the Tuscarora and the English colonists; there had been no massacre by the Tuscarora.  The English felt that there was no reason to agree to peace.

It was not just the English colonists who were creating problems for the Tuscarora. In 1711, Swiss Baron Christoph von Graffenried founded the colony of New Bern on Tuscarora land in North Carolina without obtaining Tuscarora consent or paying them for it. The Tuscarora, angered by the European land developers who paid little attention to Tuscarora land and to their treaties, captured a surveying party who were laying out the new colony. The captured men were taken to the Tuscarora town of Catechna and tried before a council of chiefs. One of the men, the provincial surveyor-general, was condemned to death and executed.

The Tuscarora attacked the Swiss settlement, killing nearly 200, including 80 children. Concerned about slave-raids from English traders, the Tuscarora expanded the war by raiding frontier farms.  A number of other tribes joined with the Tuscarora in their war against the European invaders.

By 1712, the Tuscarora were involved in a full-scale war against the Europeans colonists in Virginia and the Carolinas. The colonists were regularly attacking Tuscarora villages, killing hundreds, and capturing many Indians who were sold into slavery. The colonists also recruited the Catawba and other tribes in their war of Tuscarora extermination. The English were motivated by their greed for Tuscarora land as well as the profits which could be made through the sale of Tuscarora slaves. The newly captured slaves were generally shipped to the Caribbean slave markets.

In 1713, a unified force of 800 Creek, Cherokee, and Catawba, together with 100 colonial volunteers from South Carolina, attacked the Tuscarora fortified town of Noeheroka. The attacking force took 192 scalps and 392 slaves.

By 1713, the colonists had defeated the Tuscarora, and settlers began taking not only Tuscarora lands, but also the lands of tribes which had aided the colonists in their war against the Tuscarora. As a result, many Tuscarora families begin to move north and seek shelter in Iroquois communities in Pennsylvania. The following year, a group of about 500 Tuscarora families, fleeing from North Carolina and Virginia, sought refuge among the Iroquois in New York.

In 1722, the Tuscarora formally joined the Iroquois and the League of Five Nations becomes the League of Six Nations. As a member of the League, the Tuscarora are considered the younger brothers of the Cayuga. Their chiefs were not sachem chiefs within the league and thus the number of chiefs who sat in council did not change. In New York, the Tuscarora maintained their village between the Oneida and Onondaga villages.