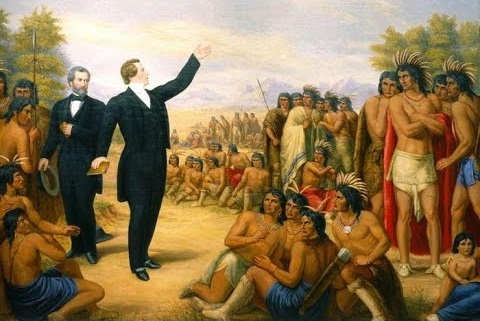 In 1847, the Mormons entered what is now Utah and began to build their Kingdom of God on Earth. There are some who feel that that this was to be a kingdom that did not include the American Indian residents of Utah. Unlike American settlers in other parts of the west, the Mormons have included Indians in their religion and their entry into Utah challenged their religious attitude toward Indians. The Book of Mormon promised that the Indians would be redeemed through the influence of the gospel, but the reality of the frontier situation in Utah demanded the immediate displacement of the Indians.

To the Mormons, redemption of the Indians (whom they called Lamanites) was a prophecy to be fulfilled and a scripture to be vindicated. Thus Mormon ideology regarding the origin and identity of the Indians was responsible for some favorable attitudes and policies toward them.

Shortly after the arrival of the Mormon settlers in the Salt Lake Valley, small groups of Shoshone and Ute came to trade horses for guns. The area was a buffer zone which was contested between the Ute and the Shoshone. The Shoshone told the Mormons that the Ute were interfering with their rights. Concerned about the possibility of conflict, the Mormons ceased trading guns and ammunition to the Indians. The Mormons also abandoned their earlier policy of buying or renting land from Indians and declared ownership based on divine donation and beneficial use. According to Heber Kimball:

“The land belongs to our Father in Heaven, and we calculate to plow and plant it; and no man shall have the power to sell his inheritance for he cannot remove it; it belongs to the Lord.”

The Mormons, unlike the trappers who had preceded them, intended to stay in Utah. Therefore they needed to develop a stable relationship with Native Americans. Brigham Young announced a policy of friendliness toward Indians that was designed to minimize tensions between settlers and natives. Brigham Young’s policy was to deal with the Indians fairly. Unlike other American settlers, the Mormons were not to kill Indians randomly, nor were Indians to be killed for stealing. This policy, however, was soon challenged.

In 1849, the Mormon settlers were having many horses and cattle stolen by Indians. In response, Brigham Young sent out a militia company to end the depredations. The militia surrounded the small Ute band of Little Chief and engaged in a four-hour battle in which all four warriors were killed. This engagement, carried out with determination and dispatch, shows a change in Brigham Young’s policy that Indians would not, or should not, be killed for stealing.

The following year some Shoshone warriors from Terrikee’s band rode through the grain fields and melon patches of Mormon settlers near Ogden. Fearing trouble, Terrikee sent his people away. However, he was killed by a Mormon farmer who thought that the chief was trying to steal corn. In retaliation, the Shoshones killed a Mormon settler. This incident heightened tension between Mormon settlers and the outlying Northwestern Shoshone to the north of Great Salt Lake.

In 1850, following an argument over a stolen shirt, Mormon settlers in Utah Valley killed a Ute known as Old Bishop, stuffed his stomach with rocks, and threw his body into the Provo River. When the Utes found the body, the Mormons feared retribution and asked for help from the Mormon Militia.

In response to the call for help, the Mormon militia engaged a Ute band of Big Elk which had been weakened by an epidemic. The Utes retreated with the sick and wounded, taking refuge in a nearby canyon. About 40 Utes were killed and the militia commander, who was under orders to take no prisoners, killed those who surrendered. The women and children were herded into an open stockade. Even though it was winter, they were fed slop in troughs like beasts. The captive children were distributed among the Mormons, to be brought up in the habits of a Christian life. Most escaped at their first opportunity.

By 1850 the Mormon policy with regard to Indians had changed. Reports of depredations were now followed by militia action. The best land was to be taken by Mormon settlers without payment. The Indians were to be strictly excluded from Mormon settlements. Stealing by Indians was often to bring swift punishment, including death.

Congress voted to organize the Territory of Utah in 1850. When Brigham Young announced this to the General Assembly, he also talked about the Indians:

“But habits of civilization seem not to be in accordance with their physical formation; many that have tried it, pine away, and unless returned to their former habits of living, die in a very short time. Could they be induced to live peacefully and keep herds of cattle, the conditions would very materially be ameliorated, and gradually induce a return to the habits of civilization.”

Brigham Young asked Mormon lobbyists in Washington to persuade the government to extinguish Indian title to lands in the Great Basin of Utah and Nevada and to legalize Mormon settlement and land claims.

As an organized American territory, policies regarding Indians in Utah now came under the federal government. This, however, did not end the conflicts and over the next 20 years there were a number of Indian conflicts and wars.