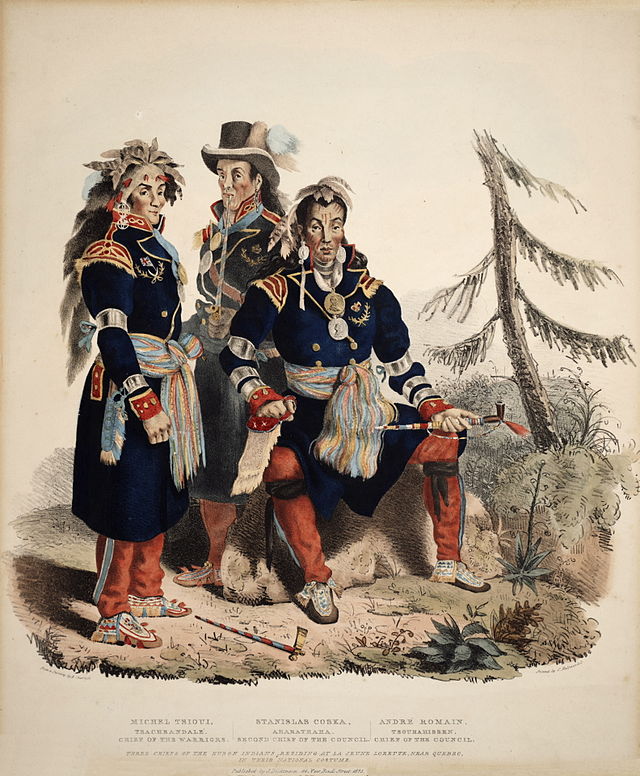 The Huron, whose traditional homeland was north of the Great Lakes, were a confederacy of four major tribes: Bear, Rock, Barking Dogs, and White Thorns (also known as Canoes). The people called their confederacy Wendat or People of the Peninsula. They were given the name Huron by the French.

Among the Huron, agriculture produced about three fourths of the food which they consumed. As with other Iroquoian groups, the farming was done by the women in fields which had been cleared by the men. All uncleared land was considered common property.

The land was cleared by first girding the trees and then burning the underbrush and trees. In addition to providing a clear space for their fields, the ash from the fire also provided additional nutrients.  Generally, the cleared land would wear out in about a decade, forcing the Iroquois to clear new land, usually farther from the village. For the smaller villages – those with about 200 inhabitants – by the time the walking distance to the farthest field reached about 1 kilometer, the oldest abandoned fields could be re-opened. For the larger villages, however, it took about 50 years for the productive fields to become too distant and requiring the village itself to move.

Planting would usually begin when the white oak leaves were the size of a red squirrel’s foot. While men would assist in the initial clearing of the fields, planting was done by a party of women under the supervision of the clan mothers. Women did the planting, weeding, and harvesting.

There were three levels of government among the Huron: village, tribe, and confederacy. At the village level, clan chiefs organized councils in which older men and women expressed their opinions on matters concerning the village. Each Huron village council met frequently, often daily, to discuss village affairs. Discussions would continue until consensus was evident.

There were two kinds of Huron chiefs: (1) civil chiefs who were concerned with everyday life and peace, and (2) war chiefs who were concerned exclusively with military matters. Being a Huron chief required both time and an expenditure of wealth. Upon the death of a chief, the new chief would often be selected from among the relatives of the deceased chiefs. The person who was elected was usually not the child of the deceased chief, but was more often a nephew or a grandson.

For Huron men there were two ways to obtain wealth and prestige: war and trade. Traditionally, war was not waged to impose religious views on other people, or to capture new territory. Most frequently the reasons for war were honor and avenging some injury. Revenge raids were usually launched at the request of a clan mother.

While brave warriors were admired, so were clever traders. Trading had prestige because individual initiative and shrewd judgment came into play. It took courage and diplomacy to open new trade routes or to organize a wide network of business alliances. The purpose of acquiring wealth through trade was not to possess or display material goods, but to be able to give them away. Giving wealth away was a way of improving social status and respect.

The first contact between the Huron and the Europeans was with the French explorer Jacques Cartier in 1535. At the palisaded Huron town of Hochelaga, the French were greeted by about a thousand Huron men and women.

In 1609, some Huron warriors joined French explorer Samuel de Champlain and a mixed group of Montagnais and Algonkin warriors. At the northern shore of what is today called Lake Champlain, they encountered a Mohawk war party massed in battle formation and wearing wooden body armor. The French firearms killed several Mohawk leaders and the Mohawk retreated.

A formal trading alliance between the French and the Huron Confederacy was negotiated in 1614. With this agreement, the Huron allied themselves with the French. The following year, Huron warriors accompanied Samuel de Champlain into Iroquois territory and attacked an Iroquois fort near present-day Fenner, New York. After the initial attack, the Huron warriors withdrew. Champlain then convinced the warriors to build large wooden shields for protection and a large moveable platform which overlooked the Iroquois palisades. While the plan had initial success, the Huron warriors, unused to the discipline expected by European military leaders, broke ranks and attempted to set fire to the palisades. The Iroquois, however, simply poured water into the troughs which formed their fire defense system and the fires were quickly extinguished. Champlain was hit twice by arrows and was severely wounded. The Huron retreated carrying their wounded, including Champlain, in improvised baskets.

The Iroquois, who had been trading with Dutch traders in New York, sent emissaries north to propose peace and trade with the French. This would allow them to play the two European powers against each other with regard to trade. While the French were concerned that the Iroquois would convince the Huron to start trading with the Dutch, they agreed to the peace in 1622.

In 1648, the Seneca and the Mohawk, both members of the Iroquois League of Five Nations, set out to destroy the Huron trading network. The Seneca, armed with firearms obtained from the Dutch, attacked the Huron town of Teanaostaiaé. Three hundred of the 2,000 inhabitants of the town were killed and 700 were taken captive. The following year, the Iroquois, supplied with 400 guns and unlimited ammunition on credit by the Dutch, attacked and destroyed the Huron. This marked the end of the Huron confederacy. Many of the Huron people took refuge with other Indian nations in the Great Lakes area. A new nation, however, the Wyandot, composed of Huron refugees as well as other Indian refugees, soon emerged, but did not challenge the Iroquois supremacy.

Cartier & the Indians of New France