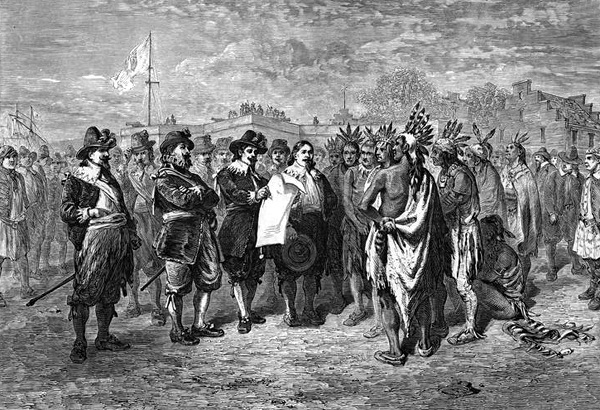 As a part of their exploitation of the natural resources of the Americas, the Dutch West India Company laid out New Amsterdam on Manhattan Island in 1624. The company envisioned New Amsterdam as a transportation hub from which they could ship timber and furs from the area. In addition, it would serve as a hub for ships trading into South America and the Caribbean. To get colonists for this new venture, the company promised them land in exchange for six years of service to the company. However, the Dutch didn’t really own the land.

In 1626, Peter Minuit negotiated with the Canarsee tribe to sell the company the entire island of Manhattan even though the Reckgawawanc have the northern part of the island.

While today’s popular history tells of Minuit buying the island for $24 worth of trade goods, the actual treaty has never been located. The deed on file in the New York State Library archives in Albany is an obvious fake. From an Indian perspective, what the Dutch purchased was simply a right to use the land in common with the Indians. Both the Dutch and the Indians understood that their agreement did not give the Dutch the exclusive rights to the land.

In 1626, the Susquehannock attempted to establish trade with the Dutch. However, the Algonquian-speaking tribes of the Delaware Valley objected and attempted to stop the trade.

The Dutch found that Staten Island was inhabited by the Raritan. The village of 80-90 people in 1628 was supported by agriculture, primarily raising corn.

While the Dutch East India Company’s interest in New Amsterdam was primarily commercial, there were missionaries living in the colony. One of these missionaries, the Reverend Jonas Michaelius who has been described as “the moodiest, bitchiest resident of New Amsterdam” wrote in 1728:

“As to the natives of this country, I find them entirely savage and wild, strangers to all decency, yea, uncivil and stupid as garden stakes, proficient in all wickedness and ungodliness, devilish men who serve nobody but the devil, that is, the spirit which in their language they call Menetto, under which title they comprehend everything that is subtle and crafty and beyond human skill and power.”

The 1626 treaty negotiated with the Canarsee was not the only effort by the Dutch to secure title to the land. These “land deals” were often misinterpreted by both sides. Since the Indians viewed land as something that was used, not owned, there was often land which was used by several different tribes. This created potential conflicts as the Dutch assumed they were buying ownership-meaning exclusive use rights-when they were actually buying only a right to use the land in common with other tribes. Thus, in 1630, Peter Minuit, on behalf of the Dutch West India Company, bought Staten Island from the Tappan. The records do not indicate how the Raritan who lived there felt about the sale, or even if they were involved.

In 1637, the Marechkawieck sachems Seyseys and Neumers sold land at Hell Gate to the Dutch.

In 1639, Mechoswodt, the chief sachem of the Massapequa placed the entire western half of Long Island under Dutch protection.

In 1640, a group of Matinecock tore down the coat of arms of the Dutch Estate General and substituted for it a fool’s head. The Dutch passed a resolution to-

“send a sloop with soldiers thither to bring said Indians under our obedience and contribution.”

In spite of the resolution, the Dutch did not launch an attack. Five years later, however, the Matinecock of Long Island signed a peace treaty with the Dutch. Under this treaty, both groups were to live in peace with each other.

In 1643, the Rockaway and the Merrick sold much of their traditional homeland near Hempstead to the Dutch. Many of the Rockaway were enraged at the sale and were hostile toward the Europeans.

In 1645, the Marechkawieck sachem Seyseys signed a peace treaty and deed which gave his people’s land in southwestern Brooklyn from Gowanus to Jamaica Bay to the Dutch.

In 1649, the Wiechquaesgeck, weakened by war and out-migration, sold their land to the Dutch. They then moved north to establish villages at Dobbs Ferry, New York and at Stamford, Connecticut.

Mattano, the sachem of the Nayack, under threat of Dutch attack, agreed in 1652 to sell tribal lands in Brooklyn, New York to the Dutch. The conditions of the deed required that the Nayack –

“remove immediately from the land now occupied by them, called Naieck, and never to return to live in the district.”

Following the sale most of the Nayack moved to Staten Island.

In 1655, about 600 Indians landed at the southernmost point of Manhattan Island and then attacked the Dutch settlement. At the same time, Indians raided other Dutch settlements and farms, killing several dozen Europeans and taking a number of hostages. In trying to make sense of this war, the Dutch blamed it on an incident in which a Dutch settler had killed a Munsee woman who was picking peaches in his orchard. Hence it was commonly called the Peach War.

In looking for a cause for the Peach War, the Dutch conveniently overlooked the fact that Dutch troops were attacking Swedish settlements on the Delaware River at this time. The Swedes had developed good trading relationships with the Susquehannock. Since the Dutch seemed intent on destroying this relationship, the Susquehannock, together with the Munsee, may have actually carried out the attacks as a way of protecting the Swedes whom they viewed as allies.

In addition to the Peach War, the Dutch also found themselves engaged in the Esopus Wars, so called because of the key role of the Esopus. These wars started when a war party of about 50 Indians attacked New Amsterdam and lasted until the English took over the colony. The Dutch viewed themselves as totally blameless in these wars and felt that the cause was the natural hostility of the natives.

In 1664, New Amsterdam was transferred from the Dutch to the English and became New York.

The Dutch and the Indians