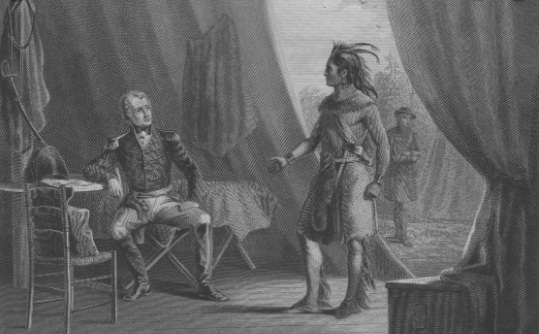 In 1813 a civil war broke out within the Creek Confederacy. There were two factions among the Creeks: the Red Sticks (called this because their war clubs were painted red), led by Peter McQueen and William Weatherford, who wanted war with the Americans, and the White Sticks, led by Big Warrior, who wanted peace.

A number of Creek spiritual leaders, influenced by the Shawnee leader Tecumseh and his brother The Prophet, preached a nativistic doctrine. These leaders include Hilis Hadjo (Josiah Francis), Cusseta Tustunnuggee (High-Head Jim), and Paddy Walsh. These prophets sought to restore a time when the produce of a woman’s farm and the meat from a man’s hunt sustained every Creek household.

William Weatherford (Red Eagle) and his warriors attacked Fort Mims on the Alabama River. Here the Red Sticks killed about 400 settlers and freed the slaves. Consequently, many runaway black slaves joined the Red Sticks. However, many Creek warriors were killed and wounded in the battle. The Creek prophet Paddy Walsh was blamed, for he had failed to make the warriors invincible as he had promised.

In response to the attack on Fort Mims, Tennessee, Georgia, and Mississippi raised armies to invade Creek territory. In 1814, at the battle of Horseshoe Bend, General Andrew Jackson’s troops (which included Cherokee as well as his Tennesseans) defeated the Creek Red Sticks, killing 800 Creek warriors. As a result of this defeat, the Creek were forced to sign a treaty in which both the peaceful White Sticks and the militant Red Sticks gave up 23 million acres of land. While White Stick leader Big Warrior had fought with the Americans, Jackson threatened him with handcuffs unless he signed the treaty. While the friendly Creek were told that the United States would remember their fidelity, within a few months the Americans no longer made any distinction between the “friendly” Creek and the Red Sticks.

William Weatherford (Red Eagle) had not been at the Battle of Horseshoe Bend. General Jackson hunted for Weatherford for weeks in vain, but was unable to find him. Later, in Jackson’s own camp, surrounded by armed soldiers who had vowed to capture William Weatherford and put him in chains, General Jackson was approached by a tall Indian who simply said in fluent English: “I am Bill Weatherford.” There was no accurate recording of the General’s surprised response. Weatherford seemed to have simply materialized in the midst of an enemy camp. He had somehow walked past the supposedly alert sentries, through the throngs of soldiers, and appeared at the General’s side.

“I can oppose you no longer. I have done you much injury. I should have done you more…my warriors are killed…I am in your power. Dispose of me as you please.”

“You are not in my power. I had ordered you brought to me in chains….But you have come of your own accord.”

The two men then shared a glass of brandy. General Jackson promised to help the Creek women and children and Weatherford promised to try to preserve the peace. Weatherford then left the tent, walked by the soldiers, and disappeared into the brush. At that point William Weatherford disappears from the historic record.