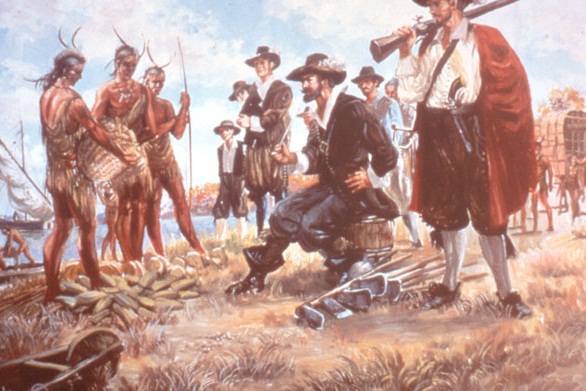 From the Native American perspective, the sixteenth-century marked the beginning of the European invasion. The first Europeans to contact the Native nations were explorers, adventurers, soldiers, and missionaries who were seeking personal glory, gold, and souls for their god.

Later the European myth of the Americas, often written in the form of histories, would describe the continent as a wilderness waiting to be conquered. In reality, there was no wilderness: the Americas were settled lands, populated by people who had been developing it for thousands of years. Historian Francis Jennings, in his book The Invasion of America: Indians, Colonialism, and the Cant of Conquest, points out that:

“Incapable of conquering true wilderness, the Europeans were highly competent in the skill of conquering other people and that is what they did. They did not settle a virgin land. They invaded and displaced a resident population.”

The early Spanish explorers in the Southeast assumed that the local Indians should provide them with food and with porters to carry their supplies. Historians Robert Utley and Wilcomb Washburn, in their book Indian Wars, report:

“When they suspected that a guide was deceitful, they killed him; if they thought an Indian ruler was less than cooperative, they often seized him to extort further concessions from his followers. The Spaniards burned villages and enslaved or killed their hosts in the conviction that terror and intimidation could serve their purposes better than any policy of kindness and accommodation.”

A Spanish expedition under the leadership of Captain Juan Pardo left the Carolina coast in 1567 to travel inland. Pardo, travelling with 100 men sought to extract food tribute from the inland Indian nations and to conquer the interior country. The Spanish party followed the well-established Indian trail to Cofitachiqui, a Creek town and to the town of Guatari where they were greeted by female chief.

In 1568, Juan Pardo’s expedition left Guatari and travelled to Cofitachiqui. Pardo ordered the chief of Cofitachiqui to load several canoes with corn from the storehouses so that it could be taken downstream.

At the town of Cauchi the Spanish saw an Indian man who was dressed as a woman and who was walking in the company of other women. When asked about it, the other Indians simply indicated that he was not a man for war and for other things that men do, but he went as a woman and did women’s tasks.

In the Southeast, Native Americans did not take the Spanish invasion of their territories passively, but often attacked the Spanish forts and settlements.

In Georgia, five interior Spanish forts were attacked by Indians and overrun. Most of the Spaniards stationed at the forts were killed. The one known Spanish survivor reported that one of the causes of the attack was the Spanish demand for food from the Indians. In at least one instance, the Indians enticed the Spaniards to leave their fort and then attacked them.

In North Carolina, Indians attacked the Spanish Fort San Juan, killing the Spaniards and burning their homes. Fort San Juan had been built by the Juan Pardo expedition in 1567. The continual demands of the Spanish for food, as well as well as a number of indiscretions with Indian women, caused relations between the Spanish and the Indians to deteriorate. In an article in Archaeology, Marion Blackburn reports:

“They covered the remains with dirt, burying the Spanish dreams of a sprawling North American empire with them.”

With regard to the reasons for the attack, Marion Blackburn writes:

“With too much time on their hands, they offended in countless ways—neglecting to supply appropriate gifts, demanding too much food, and picking fights with surrounding tribes.”

In addition, some of the soldiers raped the Indian women.

In Florida, Saturiba warriors led by Olotaraca joined French forces in a series of attacks on Spanish forts along the St. Johns River.

The European world-view during this century, and for the next several centuries, was that the world was divided into two groups: civilized people who were Christian and who were inherently superior to all others because of divine right; and savages or heathens. Native Americans were seen as savages, in spite of the fact that most lived in agricultural towns and villages.

The Spanish entered the Americas fresh from victories over Islam. They felt that god was on their side and that the only religious belief was that of Catholicism. They viewed Native American religious practices as Satanic and as evidence that the Devil was everywhere. They saw themselves in a battle with Satan for Indian souls. Writer Catherine Feher-Elston, in her book Children of Sacred Ground: America’s Last Indian War, puts it this way:

“The native populations were viewed as a crop to be harvested for the Christian God.”

In their book Discovering the Americas: The Archive of the Indies, Pedro González García et al write:

“With the conversion of Indians to Christianity as its main objective and its most justifiable reason for claiming possession of those lands, in accordance with the first bull Inter Caetera, the Spanish Crown underwrote the spiritual conquest of the New World from the outset.”

In Florida, a group of 11 Jesuits led by Father Juan Bautista de Segura arrived in St. Augustine. The Jesuits were seeking to establish missions among the Tequesta and Calusa. They made few converts. According to archaeologist Jerald Milanich, in his book Laboring in the Fields of the Lord: Spanish Missions and Southeastern Indians:

“Many of the chiefs and native priests were openly hostile toward the Jesuits, viewing them as threats to the power of the native elites.”

Indians 101 is a series exploring American Indian histories, cultures, and current concerns. More from this series about American Indians in the sixteenth century: