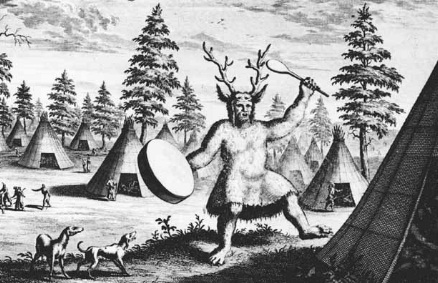 Generally, the traditional Native American spirituality among the tribes of New England is considered to be animistic: that is, the people saw themselves as a part of nature. All things were alive—that is, they have souls. In their view, these living entities included the animals, the plants, the rocks, the mountains, the rivers, the thunder, and so on. Humans did not and do not have dominion over these entities.

Both animate and inanimate objects were treated as equals, not only to each other, but to humans as well. Anthropologist Kathleen Bragdon, in her book Native People of Southern New England, 1500-1650, writes:

“As the universe was socially constituted, relations with the other-than-human were conducted along the same lines as were those with human beings.”

Since living things have souls, they can communicate. Dreams are the vehicle for this communication. Thus, Indian people would receive messages in their dreams and they would seek messages in vision quest ceremonies.

Life and death were seen as a part of a continuum, and some ceremonies involved ritual rebirth.

In hunting, the hunters would conduct a certain ritual in which the animals would be asked to give themselves to the human people. Writing about deer hunting, historian Michael Oberg, in his biography Uncas: First of the Mohegans, reports:

“Without proper attention to ritual, and without the proper demonstration of respect, deer would never allow themselves to be taken by Algonquian hunters.”

According to Henry Bowden, in his book American Indians and Christian Missions: Studies in Cultural Conflict:

“Failure to act with propriety could anger all animal spirits and cause them to leave the hunting grounds.”

Using ritual and ceremony animistic groups, such as the Mohegan, would maintain harmony with the world and with the spiritual forces.

“The Indian animistic religion was capable of absorbing all others into its broad concept, so the idea of persuading others to accept a particular doctrine or belief played no part.”

One of the important spiritual concepts of the Algonquian-speaking people is expressed in the word Manitou (or Manito). In her biography Pocahontas: Medicine Woman, Spy, Entrepreneur, Diplomat, Paula Gunn Allen writes:

“In English, manito is often translated ‘mystery.’ The Great Mystery, which is unending process, action rather than object, is gi’tchee (gitchee or kitchee), Great or Huge Mysteriousness-interacting-always.”

Among the tribes of New England, the principal religious practitioners were the medicine men and women—called powwows (sometimes spelled pauwau) by the native people and shamans by anthropologists and other social scientists. Folklorist William Simmons, in his chapter in The Pequots in Southern New England: The Fall and Rise of an American Indian Nation, writes:

“They were usually men who controlled guardian spirits that took the form of snakes, birds, and other creatures, as well as of inanimate objects. Shamans were believed to be able to direct these spirits to send injury or illness to their enemies, to heal their friends, change the weather, improve hunting, read the future, and the like.”

Powwows acted individually rather than following specific dogma or set of liturgical rules. Their behavior was based on personal choices, not inherited formulas. The spiritual powers which they had differed from those of other people only by degree. Religion professor Henry Bowden writes:

“They differed from their fellow villagers simply by having a greater personal facility for visions, trances, and prophecy.”

The powwows were often healers. Their ability to cure illness was directly related to their ability to summon the aid of their spirit helpers and in this manner to determine the nature of the illness. With the aid of the spirit helper, they would then be able to draw the illness out of the patient’s body and render it helpless. Writing in 1647, missionary John Elliot reports that the powwows “cure the sick by certaine odde gestures and beatings of themselves, and then they pull out the sickness by applying their hands to the sick person and so blow it away.” If a powwow failed to cure the sick, the powwow was sometimes killed.

The powwows often performed divinatory rituals to determine the outcome of a battle or of a hunting expedition. With the aid of their guardian spirits, the powwows could look into the future as well as the past. They would also use the help of their guardian spirits in reading omens or signs. With regard to powwows as diviners, William Simmons, in an article in New England Quarterly, writes:

“His divination techniques included inducing visions which he then read as good or bad omens, direct encounters between his soul and other spirits, and insight available through his helping spirits.”

Among the Narragansett in New England, men were called to become medicine men because of a dream or vision experience. Some powwows had the power to make the rocks move and the trees dance. The Narragansett medicine men were called upon to start all gatherings, from marriage to burial. In their chapter in Cultures in Contact: The European Impact on Native Cultural Institutions in Eastern North America, A.D. 1000-1800, Paul Robinson, Marc Kelley, and Patricia Rubertone report:

“The powwow presided over calendrical rituals and rites performed in the event of drought, famine, sickness, war, and other matters. These rituals were addressed to Cautantowwit, the creator, or chepi, an appearing spirit, perhaps the spirit of a deceased person with which the powwow had direct rapport.”

“The powwows or shamans were keepers of sacred knowledge as well as teachers, doctors, visionaries and, on occasion, diviners.”

Among the Algonquian tribes of eastern Massachusetts, some ceremonies were performed by individuals, while others required a powwow.