The War Department in 1907 officially enumerated 1,470 incidents of military action against American Indians between 1776 and 1907. According to the War Department, only two of these actions have the formal status of “war” under U.S. Army terminology: the 1877 Nez Perce War and the 1878 Bannock Indian War. One of the interesting non-battles of the Nez Perce War was Fort Fizzle-the battle that never happened and the fort that fizzled. 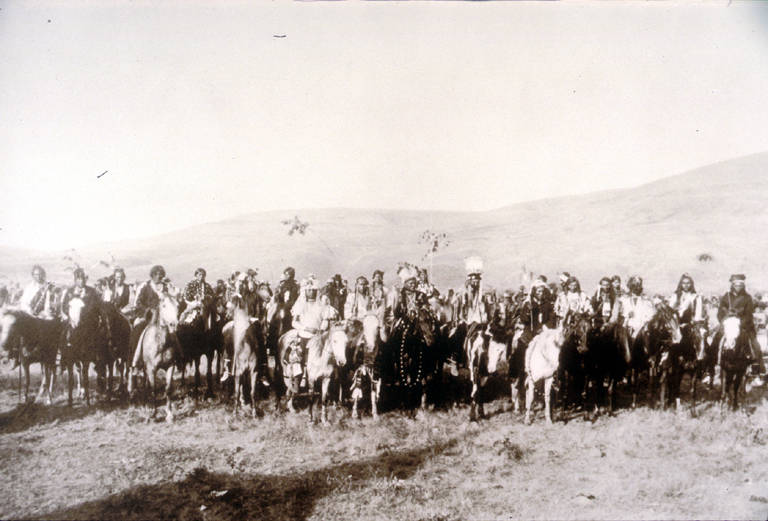 While many of the Nez Perce bands had not signed a treaty with the United States and had not relinquished their lands, the United States government decided in 1877 that all of the bands had to move to the reservation in Idaho. There were a number of reasons for this decision. First, American settlers-technically squatters-who were claiming Nez Perce land insisted that the Nez Perce be moved. While the American government had negotiated a treaty with the American supported and appointed Nez Perce chief Lawyer, the minutes from the negotiations make it clear that Lawyer had not signed the treaty on behalf of the bands outside of the reservation area.

Second, the United States wanted to put down what it felt to be an illegal religious movement inspired by the Wanapam prophet Smohalla. Commonly called The Dreamers by the Americans, the United States had sent in America’s Christian General, O.O. Howard, to put down this religious movement and to make it clear to the Indians that their only chance of survival involved their conversion to Christianity. The Nez Perce reservation in Idaho was run as a theocracy by the Presbyterians, and other religions, including Catholicism, were actively discouraged. In fact, other religions were not allowed.

General Howard met with the non-treaty Nez Perce bands and made it clear that he intended to go to war against them by making logistically impossible demands regarding their move to the reservation. As the Americans had intended, violence erupted and with that they now had a “just” war. What wasn’t expected, however, was the American defeat at Clearwater, Idaho.

The Nez Perce bands did not want war and sought only to escape the violence which they knew contact with the army would bring. On war footing, the warriors (those who had actually counted coup in battle) met in council to discuss their options. Many felt that Montana was a separate region from Idaho and that the army would not follow them there. With Looking Glass in supreme command, the non-treaty Nez Perce bands decided to leave the war behind in Idaho and cross over into Montana. The Nez Perce felt that they would be able to find peace in Montana. With 200 warriors, 550 women and children, nearly 3,000 horses, and several hundred dogs, they started up the Lolo Trail across the Bitterroot Mountains. The Nez Perce column stretched out for several miles.

In the meantime, non-Indian settlers had started to move into the Missoula and Bitterroot Valleys, often ignoring the treaty rights of the Bitterroot Salish (also known as the Flathead). While the Bitterroot Salish had always extended the hand of friendship to the Americans, starting with Meriwether Lewis and William Clark, the newcomers always demanded more and acted as if they owned the land. Many feared the peaceful Indians and asked the government to send in troops to protect them from the Indians. Many wanted the Indians removed from the area, and there were those who advocated total extermination.

While the army saw no military need for a fort in Western Montana, political pressure from Washington required that one be built. In 1877, shortly before the breakout of the Nez Perce War, the army reluctantly authorized the construction of Fort Missoula. Captain Charles Rawn and 34 men from the 7th Infantry were dispatched from Fort Shaw (located near Great Falls, Montana) to build the new fort. Since the fort had no real military function, it was not walled in and the men started putting up some buildings which would serve as housing and storage.

In the midst of their building project, a courier arrived from Fort Shaw, bringing word of the Nez Perce War. It was known that the Nez Perce were crossing over the Lolo Trail-a well-known, well-used road to the buffalo hunting grounds east of the Rocky Mountains. Captain Rawn and his men were to intercept the Nez Perce as they came out of the Lolo Trail into the Bitterroot Valley.

Captain Rawn had only 30 regular army soldiers at Fort Missoula. He quickly recruited 100 volunteers from the non-Indian farms and ranches. Another 100 were recruited from Missoula. He then led this anxious and untrained group into the mountains to meet the fierce Nez Perce warriors. At the narrowest part of the Lolo Canyon, Captain Rawn had his men and the volunteers construct a barrier about three feet high using sticks and logs. They then dug rifle pits to provide additional protection. They then loaded their guns and waited for the “hostile” Indians.

Nez Perce scouts spotted the make-shift fort and the main body camped about two miles away. The Nez Perce were not seeking war or conflict and were rather surprised to find soldiers waiting for them.

The next day, Looking Glass and Whitebird, accompanied by Delaware Jim as their translator, approached Fort Fizzle. They explained to Captain Rawn that they had peaceful intentions and wanted simply to pass through the Bitterroot Valley. While Captain Rawn agreed that he would grant them passage, he stipulated that they must surrender their arms, ammunition, and horses. Once again the chiefs faced what they felt were unreasonable demands by the American military. They realized that Rawn was asking for unconditional surrender and that a fight would have negative consequences for both sides.

Captain Rawn suggested that they meet again the next day to finalize their agreement. Rawn was hoping that reinforcements would arrive by then and reinforce his position. The Nez Perce chiefs agreed and then sent out scouts to survey the countryside.

The next day, Looking Glass and Delaware Jim returned to meet with Captain Rawn. Looking Glass again told the captain that the Nez Perce are peaceful and Rawn reiterated his demands to surrender their guns, ammunition, and horses. Looking Glass indicated that he would discuss the matter with the other chiefs and left.

When the American volunteers found out that Rawn was negotiating peace, most of them left. They had volunteered to kill Indians, not talk to them.

In the meantime, the Nez Perce broke camp, moved up the slopes, and outflanked the barrier. W. R. Logan, who was stationed at the breastworks, later reported:

“About ten o’clock we heard singing, apparently above our heads. Upon looking up we discover the Indians passing along the side of the cliff, where we thought a goat could not pass, much less an entire tribe of Indians with all their impedimenta. The entire band dropped into the valley beyond us and then proceeded up the Bitter Root.”

The Americans reported that the Nez Perce were in good humor, cracking jokes, and being amused at the way they fooled the soldiers. While Captain Rawn attempted to catch up with the Nez Perce, all of his volunteers had deserted.