For more than 3,500 years, Native Americans have been practicing agriculture in the Valley of Mexico and growing a variety of different crops. It has been estimated that prior to the Spanish invasion more than a million people lived in the Valley, with half of these living in cities. In general, all of the Aztec people, from nobility to serfs, were very well fed. Archaeologist Brain Fagan, in his book The Aztecs, writes:  “The only way to feed everyone was by efficient, government-controlled agriculture. Moctezuma Ilhuicamina and his successors maintained a small army of inspectors who oversaw the land, making sure that it was planted and that surplus foodstuffs were sent to the capital.” 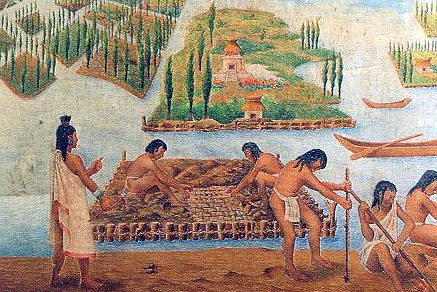 Unlike the European agricultural societies, the Aztecs did not have any domesticated draft animals, so much of the farming was done using a wooden, shovel-like device known as a uictli. Brian Fagan reports:  “The actual technology of tillage was simple in the extreme, but the measures taken to protect, enrich, and irrigate were comparatively sophisticated.”

Like other American Indian farmers, Aztec farmers understood the basic concepts of soil fertility. They knew that inter-planting maize and beans maintained the fertility of the soil. When they harvested the crops, they removed only the maize ears and the bean pods and then dug the rest of the plant back into the soil.

In the cities, such as the great Tenochtitlan, there were special huts along the streets and in the alleys which were used as toilets. From this urban sanitation system the farmers obtained human fertilizer for the fields.

In the shallow lake beds of the Valley of Mexico, the Aztec, like the great civilizations that had come before them, created chinampas. While sometimes described as floating islands, chinampas are actually artificial islands. A fairly narrow (8 to 15 feet) and long (90 to 200 feet) section of the shallow lake bed would be staked out using poles and a wattle fence. This area would then be filled with mud, decaying vegetation, and other materials to bring it above the surface of the water. Canals between the chinampa plots allowed easy transport of both people and food crops by canoe.

The basic subsistence crop was maize (known as “corn” in American English). Maize was used for making tortillas which were eaten at every meal. It also formed the basis for atolli, a kind of gruel which was served in many different varieties, including atolli with honey, with chili and honey, with yellow chili, and with fish, amaranth seeds, and honey. Another basic staple made using maize was tamales.

Maize was highly honored in Aztec society and had its own goddess: Chicomecoatl (Seven Serpent). As the seeds were dedicated to the new growing season, the people would chant: “She is truly our flesh, our livelihood.”

The second most important crop for the Aztecs, and for most of the agricultural Native American nations, was beans. Beans provided a vital source of protein and were often inter-cropped with the maize.

The Aztecs also raised a variety of other crops, including several varieties of squash, tomatoes, and chili peppers. Chili peppers were a universal accompaniment to meals and, in fact, full meals without chili were considered a fast.

With regard to the Aztec diet, Michael Coe and Rex Koontz, in their book Mexico: From the Olmecs to the Aztecs, report:  “Much of the diet of ordinary citizens consisted of tortillas dipped in a molli or sauces made of chiles ground with water; maize could also be taken in the form of steamed tamales, to which could be added ground or whole beans, but unlike their modern counterparts, these contained no fat or grease.”

They had several different kinds of fruit trees and they cultivated cacti such as nopal or maguey (agave). Maguey was used to make a fermented and intoxicating beverage which the Spanish called pulque, a milky-white beverage. The Aztec called it iztac octli.

While alcohol was widely consumed, in theory only people over the age of 50 (some sources say 70) were supposedly allowed to consume it. During a feast or ceremony, people were not supposed to drink more than four cups of pulque. While drunkenness was prohibited and severely punished, old people were allowed to get drunk whenever they wanted. Alcohol was also a common ingredient in medicines.

In the outlying parts of the Aztec empire, the people also raised cotton and cacao. Cacao beans served as a kind of currency throughout the Aztec world. As with the Mesoamerican cultures which preceded the Aztecs, chocolate was the favorite drink of the nobility.