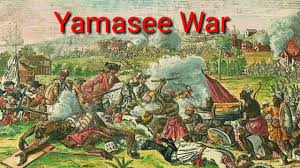 The Yamasee were a Muskogean-speaking Indian nation living in what would become southern Georgia and northern Florida when first encountered by the Spanish in the sixteenth century. In 1687, the Yamasees, unhappy with the Spanish occupation and rule of their territories, moved north in South Carolina, was then under British rule. In South Carolina, the Yamasees became allies and trading partners with the British colonists.

For the British in the late seventeenth and early eighteenth centuries, one of the important commodities was Indian slaves who could either be sold in the Caribbean slave markets or used on the colonists own plantations. Donald Grinde, in an article in The Indian Historian, reports:

“They developed an Indian slave trade based on predatory raids. This practice became a lucrative business for Charleston merchants.”

As with the African slave trade, the English used indigenous allies to obtain slaves. They would arm the coastal tribes and then encourage them to raid the tribes in the interior to obtain slaves. Donald Grinde writes:

“Within a few years after the settlement of Charleston, Indian slaves were being brought from the interior to Charleston just as Africans were being funneled through the trading forts of the West African coast.”

Carl Waldman, in his book The Encyclopedia of Native American Tribes, describes the process of obtaining Yamasee slaves:

“First, they gave the Indians all the rum they wanted plus trade goods. Then they demanded immediate payment from the Indians. The Indians could not pay off their huge debts and asked for more time. To settle the debts, the slavers seized Yamasee wives and children for the slave market.”

The Indian slaves were then sold in the West Indies slave markets or they were taken to New York and the New England colonies.

The Yamasees were allies in the British slave trade and carried out slave raids against Indian nations in the Spanish territories of Florida. In 1708, the Spanish governor at Saint Augustine reported that there were only 300 natives left in the area. He estimated that 10,000 to 12,000 Florida Indians had been enslaved by the Carolinians and their Indian allies. By 1710, it was estimated that 10,000 to 20,000 Indian slaves had been shipped from the Southeast to New England and the Caribbean.

The Yamasees soon found that the British were neither good allies nor good trading partners. Not only did the traders consistently cheat their Yamasee trading partners, they were not above beating them and even enslaving their women and children. Christina Snyder, in her book Slavery in Indian Country: The Changing Face of Captivity in Early America, writes:

“From the Yamasee perspective, their Carolina allies had become greedy, irresponsible, and violent, thereby destroying the chains of obligation that once bound them as allies.”

The Carolinians were aware that the Yamasee had some complaints about the way they were being treated. On April 14, 1715, South Carolina’s Indian agent Thomas Naine, along with former Indian agent John Wright and others, met with the Yamasee chiefs at the village of Pocataligo. They spent the evening drinking rum, feasting, and discussing their trade issues. The following morning, which happened to be Good Friday, the Yamasees bound Naine to a post in the center of the village square. They pierced his body with lighted splinters and slowly burned him to death. This was the start of the Yamasee war.

It was not just the Yamasee who went to war against the British colonists: in a coordinated action, the Creeks under the leadership of Brim of Coweta and the Choctaws killed some of the traders in their towns and attacked several plantations.  Christina Snyder reports:

“Similarly discontented neighboring nations, including the Lower Creeks, Savannahs, and the captive Apalachees of Savannah Town, applauded the Yamasees’ declaration of war and followed suit.”

Most of the Indian traders—an estimated 90%–are killed in the first few months of the war.

About 400 English colonists were killed in the war, which was about 7% of the colonial population. In response, Governor Charles Craven quickly put together an army from the South Carolina militia, enslaved African Americans, volunteers from Virginia and North Carolina, and some friendly Indian nations. A force of 70 Tuscacoras aided South Carolina in their war against the Yamasee. The campaign against the Indians has generally been described as “brutal.”  In his book Catawba Valley Mississippian: Ceramics, Chronology, and Catawba Indians, archaeologist David Moore reports:

Over the next two years, the British and their allies continued to attack the Yamasee, driving them out of the region. Many of the survivors fled south to Florida and north to join the Catawba Confederacy. Those who fled to Florida once again became allied with the Spanish. Jerry Keenan, in his book Encyclopedia of American Indian Wars, 1492-1890, reports:

“So thorough was Craven’s pursuit that the Yamasee almost ceased to exist as a tribal entity thereafter. What had been Yamasee territory now became part of James Oglethorpe’s new colony of Georgia.”

The Yamasee War officially ended in 1718 with a peace accord between the British colonists and the Indian nations. As a result of this war, many colonists began to question the wisdom of capturing and using Indian slaves. Christina Snyder writes:

“After the Yamasee War, they increasingly turned to African labor, despite the fact that Africans cost more and were taxed at higher rates than Indian slaves.”

Donald Grinde, in an article in The Indian Historian, summarizes the Yamasee War this way:

“The Yamasee War demonstrated the fullest extent of white economic exploitation of aboriginal people in colonial America. With little criticism from church or government, the South Carolinians had persuaded larger tribes to enslave lesser coastal tribes for the sake of English trade goods.”

With regard to the lessons from the Yamasee War, Grinde writes:

“Slave-catching almost inevitably led to Indian uprisings, and the more populous inland tribes were formidable adversaries. Due to this fact, it seemed easier to turn to Black slavery.”

The last distinctively Yamasee village, located near St. Augustine, was destroyed by the British in 1827. The Yamasee who settled with other Indian nations—Apalachee, Creek, Seminole—lost their tribal identity.

The Yamasee War and the Indian Slave Trade