We Shall Remain is a groundbreaking mini-series and provocative

multi-media project that establishes Native history as an essential part

years tell the story of pivotal moments in U.S. history from the Native

Episode 1 After the Mayflower

In 1621, the Wampanoag of New England negotiated a treaty with Pilgrim

settlers. A half-century later, as a brutal war flared between the English

and a confederation of Indians, this diplomatic gamble seemed to have been

In the course of his brief and meteoric career, Tecumseh would become one

of the greatest Native American leaders of all time, orchestrating the

most ambitious pan-Indian resistance movement ever mounted on the North

Though the Cherokee embraced “civilization” and won recognition of tribal

sovereignty in the U.S. Supreme Court, their resistance to

removal from their homeland failed. Thousands were forced on a perilous

the U.S. government, Geronimo was seen by some as the perpetrator of

unspeakable savage cruelties, while to others he was the embodiment of 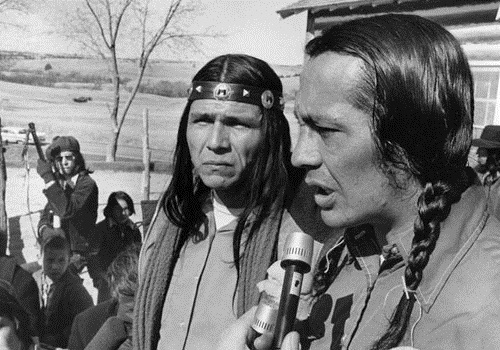 In 1973, American Indian Movement activists and residents of the Pine

grievances. As a result of the siege, Indians across the country forged a

new path into the future.

how Native peoples valiantly resisted expulsion from their lands and

fought the extinction of their culture — from the Wampanoags of New

es, to the bold new leaders of the 1970s who harnessed the

momentum of the civil rights movement to forge a pan-Indian identity. We

Shall Remain represents an unprecedented collaboration between Native and

non-Native filmmakers and involves Native advisors and scholars at all

levels of the project.

An in-depth Web site will serve the general public, educators, and

video. Part of PBS Online, one of the leading dot-org sites on the

Internet, the We Shall Remain site will feature Web-exclusive videos

Native enterprise and tribal sovereignty. The site will also host

and information about upcoming events across the nation.

with a national audience. At workshops in Arizona,

Massachusetts, and Oklahoma, participants ranging in age from fourteen to

and profound, the films reveal the diversity of the contemporary Native

experience and testify to the resilience of Native people and culture.

universities, museums, schools, and libraries. The events, activities, and

dialogue that come out of these relationships will extend We Shall

earn>  for social studies educators. The guide will incorporate video

segments from the five documentaries into social studies resources,

offering both viewing and comprehension aids and classroom activities. T

his resource will inspire and support teachers to integrate Native history

and issues into their curricula and encourage them to present Native

history as an integral part of American history.

WGBH is working closely with the American Library Association (ALA) and

awareness of the series among librarians, Native organizations,

scholars, and writers. Ms. Roy is also collaborating with WGBH to

the unique needs of local communities and tribal libraries. A library

libraries will be distributed to 17,000 public libraries, as well as to

all tribal libraries. The kit offers programming ideas and resources to

help libraries organize and deliver engaging events related to We Shall

and an extensive bibliography of book, film, and Internet resources.