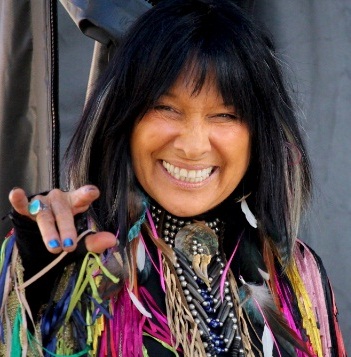 The Cree Indian folksinger Buffy Sainte-Marie has often complained that too many people saw her as Pocahontas with a guitar. She’s anything but. Her career, which began in the early 1960s at beatnik coffeehouses in Canada and the United States, has been marked by political controversy, drug addiction and numerous hiatuses. This year she broke her most recent 13-year-long pause with a new album, her 18th, Running for the Drum.

If you know Buffy’s songs – love songs, ballads, political – but haven’t yet heard any takes from Running for the Drum, you may be surprised by her fresh sound in this new album, although that haunting voice hasn’t disappeared. There’s a message, however, that won’t be a surprise to anyone. The lead song is called “No No Keshagesh.” In her native tongue, Keshagesh means “greedy guts.” “It’s what you call a little puppy who eats his own and then wants everybody else’s.”

Here are the lyrics (audio with the whole band here):

I never saw so many business suits

Never knew a dollar sign could look so cute

Never knew a junkie with a money jones

These old men they make their dirty deals

Go in the back room and see what they can steal

Talk about your beautiful for spacious skies

Got Mother Nature on a luncheon plate

They carve her up and call it real estate

They make a war over it; they blow things up for it

The reservation out at Poverty Row

The cookin’s cookin and the lights are low

Somebody tryin to save our Mother Earth I’m gonna

Ol Columbus he was lookin good

When he got lost in our neighborhood

Garden of Eden right before his eyes

What he can’t buy he’ll get some other way

Send in the troopers if the Natives resist

Same old story, boys; that’s how ya do it , boys

Look at these people Lord they’re on a roll

Got to have it all; gotta have complete control

They break the law over it; blow things up for it

While all our champions are off in the war

Their final rip-off here at home is on

Mister Greed I think your time has come I’m gonna

Sad to say, unless the guys slowly slowly slowly rewriting regulations for the financial institutions of our country don’t stop saying yes, yes keshagesh, to the very people who did so much to bring on the worst economic crisis of the past 75 years, Buffy’s description of their behavior will still be apt decades from now. Not that mere regulations will do all that needs to happen.

A beaming Amy Goodman interviewed Buffy and played a few of her songs for an entire hour that was cablecast on Thanksgiving.

Here she is with one of her lesser-known light-touch songs.

And here she is singing the iconic, but still controversial “Universal Soldier.”