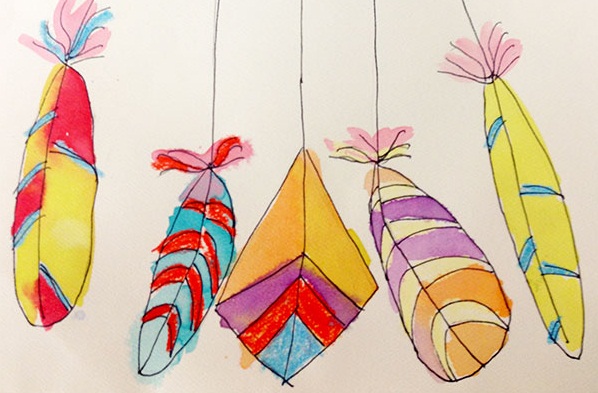 While there are more than 500 distinct American Indian cultural traditions in North America, those of the Northern Plains-Montana, the Dakotas, Alberta, Saskatchewan, Wyoming, Nebraska-have most frequently captured the imaginations of the popular media. As a consequence, when many non-Indians think about Indians, the images of the Northern Plains nations most frequently come to mind. There are many non-Indians who seek to follow a mystical path which incorporates elements of American Indian spirituality, and this spirituality tends to be inspired by the popular conceptions of the Northern Plains nations.

In this diary I would like to explain some of the common Northern Plains Indian spiritual practices which are often incorporated into contemporary non-Indian spiritual paths. These practices include smudging, the use of paint (mineral coloration), and the dreamcatcher.

One of the most common spiritual practices is smudging-the making of smoke. Smudging is a part of almost all traditional Northern Plains spiritual activities. The smoke of sage, sweetgrass, and other plants is often used for purification. In some instances, the smoke from the burning plants, or mixture of plants, is pulled across the body in a cleansing action. The smoke is a purifying agent, a means of dispelling the everyday atmosphere and substituting a pleasant odor for the spirits.

Smudging makes it possible to see and communicate directly with the spirits. Smudging opens up the portal which allows humans to penetrate the barrier that separates us from the spiritual. Thus, smudging is frequently the first ritual in a ceremony. Smudging may also be repeated during a ceremony.

It is not just human people who are smudged. Houses, cars, guns, computers, and other items often smudged to bring them into harmony. This is because it is believed that every object-even those sometimes considered inanimate-have a spirit.

One of the difficulties with the use of smudge during Indian ceremonies is found in prisons. In those prisons in which Indians are allowed to have traditional ceremonies, prison officials have often mistaken the smell of the smudge for illegal drugs and this has resulted in having the ceremonies interrupted.

The painting of the body, face, and hands is an important part of many ceremonies. While it is common for non-Indians to call this “war paint,” this is a practice which is not necessarily related to war. Blackfoot elder Long Standing Bear Chief explains: “We believe that the Creator gave paint as one of four gifts to the human child of this Great Holy Being. Paint was given to use as a means of painting a person in difficulty because they were being marked for special recognition as being a person of the Source of Life’s making.”

Traditionally, the paint was made from ochre, a type of mineral, which pounded into a powder and then mixed with fat (bear fat was often preferred). It would be applied using the fingers.

Some individuals paint themselves with special designs which have been given to them by their guardian spirits. The designs and colors they use may symbolize their special relationship with the spirits. In some situations, the pattern of the painting may be dictated by the ceremony itself. In the traditional Cheyenne Sun Dance during the nineteenth century, for example, the dancers were painted with designs relating to the day of the ceremony.

The dreamcatcher is often sold in bookstores, trading posts, and new age spirituality shops. It is common that a short explanation of the dreamcatcher will come with it. Sometimes this explanation stems from the vivid imagination of non-Indian artists. Each of the tribes in which dreamcatchers are used has its own story regarding its origin and spiritual use.

Basically, the dreamcatcher is simply a circle which contains a web. Other symbolic items may be attached to the web or to the circle. In many of the tribes of the Northeastern Woodlands, the dreamcatcher was constructed from pliable branches, such as those of willow. It was traditionally intended to be hung over a child’s cradle and it was not intended to be a lasting artifact.

Today, the dreamcatcher is often used by adults. The symbolism in it may reflect a personal path. When I make dreamcatchers for other people I usually try to personalize them for that individual. The purpose of the dreamcatcher is, of course, to aid in remembering and interpreting dreams. For some, it is a way to enhance helpful dreams while reducing those dreams that create terror.

Keeping in mind that dreams often come to us when we are sleeping, there are many who feel that having a dreamcatcher hanging from the rearview mirror in the car is not really appropriate. Driving is not really an appropriate place to be attempting to contact the dream world.