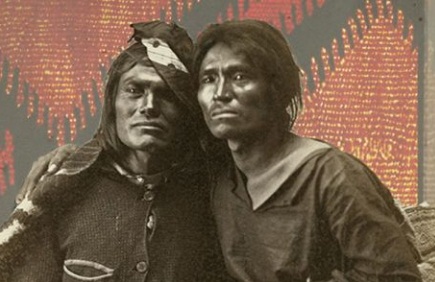 The Columbia Plateau is the geographic region that lies between the Cascade Mountains to the west and the Rocky Mountains to the east. It covers parts of present-day Washington, Idaho, Oregon, Montana, and British Columbia. It is a country that includes large rivers, such as the Columbia, semiarid plains, and forested mountains. Indian people have lived in this area for many thousands of years.

With regard to language, there are several major language families represented in the area.  To the north there are many Salish-speaking tribes, such as the Pend d’Oreilles, Coeur d’Alene, Kalispel, Spokane, and Flathead. To the south of these groups there are Sahaptian-speaking tribes, such as the Nez Perce, Walla Walla, and Umatilla. Linguistically, the Salish and Sahaptian tribes are related to tribes on the Pacific coasts which suggests that there was an ancient migration from the coast inland, probably following the rivers.

The Kootenai, whose aboriginal homeland included parts of British Columbia, Montana, Idaho, and Alberta, are an unusual Plateau tribe. Linguistically, Kootenai is classified as a language isolate: it is not related to any other language. In addition, it appears that the Kootenai migrated into the Plateau area from the Great Plains to the east of the Rocky Mountains.

While each of the tribes of the Plateau area is unique, they do share a number of cultural characteristics. One of these is a long tradition of prophets. Some people would undergo a great personal and spiritual transformation. One common theme is for a person to die and then return to life. It was not uncommon for people, both men and women, who had had such transformations to be able to predict the future. In other words, they became prophets.

Some prophets, such as Smohalla and Jake Hunt, became known to non-Indians, but most were known only to the Indian people.

Another feature of Plateau culture, and one that is shared with Indian cultures in other areas, is the view that the dividing line between men and women is not rigid. It was not uncommon for an individual to be born with male genitalia and a female spirit, or vice versa. In living with their internal harmony and balance, it was common for these people to change their gender identities. During the nineteenth century, the fur traders would refer to these individuals as berdache.

Toward the end of the eighteenth century, a child was born in a Kootenai band in western Montana and southeastern British Columbia. She was given the name One-Standing-Lodge-Pole-Woman and she grew into a large, heavy-boned woman. It is said that there were some who doubted the she would ever marry, but then she surprised them by marrying a Norwester (a fur trader with the North West Company) about 1807. Marriage between fur traders and Indian women was a common practice at this time and was encouraged by the trading companies as a way of establishing kinship ties with the Indians. Among the Europeans, this type of marriage was called an “in-country marriage” as it was done without a Christian ceremony and it was not expected to be of a long duration. While the Europeans viewed this as a special kind of marriage, and one that differed from the European norm, from an Indian perspective this was a marriage like any other. Among the Plateau people at this time, there was neither a religious ceremony for marriage nor an expectation that such a union was last forever.

Like other Indian wives, One-Standing-Lodge-Pole-Woman went with her husband, Augustin Boisverd, when he left Kootenai country.

Just like those prophets who had died and returned to life, Gone-to-the-Spirits claimed to have gained a great deal of spiritual power through the transformation from woman to man. As with others who had gone through transformations, Gone-to-the-Spirits had gained the power of prophesy. Soon the prophesies of Kauxuma-nupika spread through the Columbia and Fraser River Plateaus and contributed to rise of other religious movements in these areas.

Since Gone-to-the-Spirits was now living as a man among the Kootenai, like a Kootenai man he/she sought out a wife. After a while, he/she found a woman who had been abandoned by her husband. The two moved in together and, in Kootenai custom, were considered to be married. While many Kootenai apparently tried to find out the intimate details of this relationship, neither Gone-to-the-Spirits or his/her wife would talk about them.

As with other relationships-both European and Indian, and heterosexual and homosexual-the relationship deteriorated after a while. Before long, Gone-to-the-Spirits was openly beating his/her wife, a behavior that was not viewed with favor.

About this time, Gone-to-the-Spirits also began having problems with gambling. After he lost his bow, quiver, and canoe because of gambling, his wife then left Gone-to-the-Spirits for good. While Gone-to-the-Spirits had gained great spiritual power in her transformation into a man, she apparently acquired a number of short-comings that were often associated with men.

As a woman who had become a man, Gone-to-the-Spirits went on horse raids. While crossing a river on one raid, her brother noticed that she still had female genitalia even though she had claimed to have become a man physically. After this incident, she again changed her name to Sitting-in-the-Water-Grizzly (Qánqon Kámek Klaúla).

Sitting-in-the-Water-Grizzly then married another woman, but this relationship also soured. Once again his wife left and demonstrated the human shortcomings of this prophet.

Along the way down the Columbia River Sitting-in-the-Water-Grizzly would inform the tribes they encountered that he/she had the power to introduce smallpox. While this was probably intended to increase his power, both the Chinook and the Clatsop made plans to kill him or to capture him and sell him into slavery. In this way they hoped to remove the danger of smallpox.

While in Astoria, Sitting-in-the-Water-Grizzly made a number of maps of the interior for the fur traders.

On the way back up the Columbia River, Sitting-in-the-Water-Grizzly claimed that he had been sent by the Great White Chief with a message for the people: gifts of goods and implements would be sent to them. Furthermore, the traders had cheated them by selling them goods instead of giving them to them as directed by the Great White Chief. This tended to create some bad will for the traders.

In 1837, Sitting-in-the-Water-Grizzly went on a raiding party with a war party of young Kootenai warriors. The war party failed to locate any enemy and so were returning home when they were ambushed by the Blackfoot. One Kootenai warrior hid in the dense brush and later told the tale of the massacre.

Sometime later, when the Kootenai reached the bodies of their slain warriors, they found that the body of Sitting-in-the-Water-Grizzly was undisturbed by wild animals or birds.