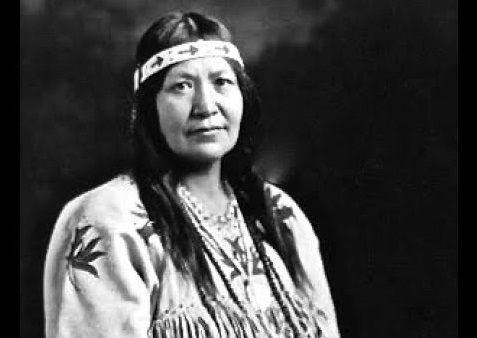 Christine Quintasket, writing under the name Mourning Dove, was the first American Indian woman to write a novel. Cogewea: The Half-Blood  had actually been completed in 1916, but it took another decade to find a publisher for it. The novel remained an obscure piece of Native American literature until it was repub¬lished in 1981.

Mourning Dove was not well-educated. As a child, she was sporadically enrolled in the Goodwin Catholic Mission School near Kettle Falls Washington. Her first experience with school was so traumatic that she became deathly ill and had to return to her reservation home. She reports that she was lonely and that she was punished for speaking only Salish.

Later she attended the Fort Spokane School for Indians and then she worked in exchange for classes at the Fort Shaw Indian School in Montana.

Sometime after she learned English, she began reading the so-called “dime novels” and these influenced her later writings.

While living in Portland in 1912, she began working on her novel and the idea of becoming a writer began to grow. In order to pursue her goal of becoming a writer, she briefly attended a secretarial school in Alberta, Canada so that she could learn to type.

To support herself, she worked as a migrant farm laborer, picking fruit and vegetables by day then trying to write in her camp tent at night. Her life was often one of poverty and physical hardship.

She started writing using the pen name Morning Dove. According to Colville oral tradition, Morning Dove was the wife of Salmon who welcomed his return each spring. However, while visiting a museum in Spokane, Washington she happened to see a mounted bird with the label “mourning dove” and decided to use this name which added some tragic overtones to her pen name.

About 1914 or 1915, Mourning Dove met Lucullus V. McWhorter, a businessman and Indian-rights advocate, who became her literary mentor. He encouraged her to collect traditional stories and edited Cogewea. At the time of their first meeting, she had already completed an initial draft of the book. By the time she had a final draft ready for publication, World War I interrupted the publishing scene.

The influence of McWhorter is easily seen in Cogewea. At times the novel is written in the style of a dime novel romance (reflecting her early fascination with this writing form) and at other times it takes a more academic, anthropological approach to explaining Indian culture.

In 1933 her second book, Coyote Stories, was published. This is a collection of traditional Okanogan stories. However, working with an editor who was primarily concerned with reaching a non-Indian audience, these stories are presented in a fashion that would be acceptable for this audience. Thus stories about incest, transvestism, and infanticide were omitted from the collection. The alterations in the stories to make them appeal to a non-Indian audience often makes them unrecognizable to the traditional Okanogan from which they came.

Throughout her life she was active in reservation politics. In 1935, she was elected to the Colville Tribal Council, becoming the first woman to serve as a council member. She was often a public speaker on issues of tribal welfare and women’s rights. She died in 1936. Her personal and cultural memoirs-Mourning Dove, a Salishan Autobiography-was published posthumously fifty-four years after her death.