Sarah Ainse (who often called herself Sally and sporadically used the last names of her husbands: Montour, Maxwell, and Willson) was a powerful Oneida trader in the Great Lakes area during the eighteenth century. Like many other Indians of this time period, she spoke several languages fluently (including English, Ojibwa, Shawnee, and Mohawk) and moved comfortably among many different cultural groups, including those of the European settlers. She appears to have attended a colonial school and was very literate in English. 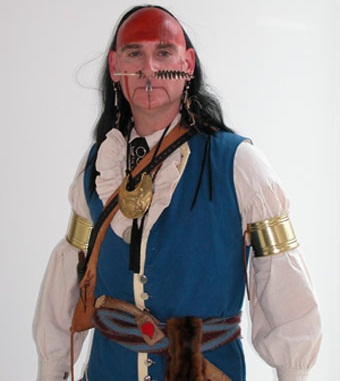 In 1753 Sarah Ainse married the son of an Oneida warrior who called himself Andrew Montour. Montour was a prominent trader and interpreter on the western Pennsylvania frontier. He was fluent in French and English as well as Oneida, Delaware, Shawnee, and Miami. In addition to being an Oneida chief, Montour also worked for the colonists as a scout, interpreter, and consultant in native affairs. Sarah’s marriage to Montour is generally described as short-lived (three years or less), and tempestuous (he drank a lot and she liked to spend money).

By 1758, Sarah Ainse had established herself as a trader at Fort Stanwix. She understood the colonial property system and in 1762 persuaded the Oneida to grant her a tract of land six miles square in a prime location for commercial development. While the Oneida chiefs favored her, the colonists did not. The British governor rejected her deed and gave her land to a cartel of powerful friends.

Frustrated with her treatment by the colonial government in New York, Sarah Ainse moved to the Great Lakes area and by 1766 she had established herself as a trader among the Mississauga on the north shore of Lake Eerie.

In 1783, she picked up another short-term husband, John Willson, who paid off at least £1,256 of her debts before they parted.

Always open to new opportunities, she found a prime tract of land on the lower Thames River. The land fronted a navigable river, was close to Detroit, and appeared to be fertile. In 1780 Sarah Ainse then purchased the land-150 square miles along both banks of the river-from the Ojibwa for £500 in goods.

In 1787 Sarah Ainse moved onto her tract of land, built a house, fenced in an old Indian field, and planted an orchard. She encouraged her Oneida relatives to join her. Her land was in Upper Canada and thus could serve as a refuge for those Oneida who had been loyal to the British during the American Revolution.

In spite of the fact that she had purchased the land, colonial squatters moved on to it and the government ignored her title. In 1790, the local Indian Department agent purchased the valley for the Crown from the Ojibwa. In spite of the fact that the Ojibwa had specified the reserve for Sarah Ainse, the agent denied it. Eighteen Ojibwa chiefs then certified her reserve, but the agent still denied her right to the land.

In 1792, Sarah Ainse appealed her case to the Executive Council of Upper Canada. The Council ordered a compromise by awarding her 1,600 acres which included her farm. The local board, however, procrastinated in enforcing the Council’s decision, protesting that this action would bring insecurity to the settlement.

In order to obtain title to her land, Sarah Ainse would first have to have the land surveyed, setting accurate boundaries. The Executive Council directed the local land board to employ Patrick McNiff to conduct the survey. McNiff then reported that he did not know any woman by the name of Sally Ainse (Sarah often used the name Sally) nor did he know of any land claimed by such a person. He did, however, report that an Indian woman named Sarah Willson claims the land, but that this woman cannot claim it as she is a married woman. Under common law, no married woman could hold legal title to real estate.

Furious at the delays, Sarah Ainse charged the local land board with dragging its feet in order to help the squatters. She writes: “I see no reason why I should be openly plundered of my property.” Mohawk leader Joseph Brant then begins to press the colonial government for a resolution to the situation.

In 1798, the Executive Council reserved their former decision and awarded Sarah Ainse only a single farm of 200 acres.

While Sarah Ainse was a fairly successful farmer, disaster struck in 1798 when her barn, filled with her annual harvest, burned down. Destitute, she appealed to the Moravian mission for help. Twenty bushels of corn were collected for her. By 1805, she was a charity case, begging local merchants for whiskey.

Sarah Ainse went from a young bon vivant, a successful farmer and trader, to an old woman reduced to begging to stay drunk. In spite of this, she continued to appeal her case, asking the Executive Council in 1808, 1813, and 1815 for compensation for the land taken from her. Repeatedly, the Canadian colonial government rejected her claims. In 1815, the Executive Council insisted that Sarah Ainse was dead and refused to rule on her petition. Unfortunately, she was still alive: she died in 1823.

The story of Sarah Ainse illustrates the problems faced by strong Indian women who attempted to pursue their property rights in the colonial world. They faced discrimination because they were Indian and they faced discrimination because they were women. In Iroquois society-the Oneida are one of the Six Nations of the Iroquois Confederacy-women were the land owners, while in Colonial English and American society women, and particularly married women, had fewer legal rights than either slaves or people who had been declared insane.