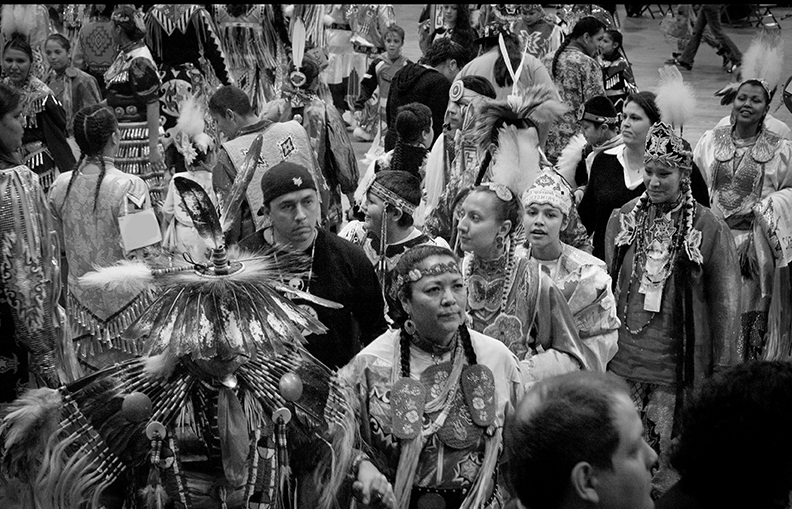 Following World War II, many American politicians wanted to end the federal relationship with Indian nations. They cited the cost of maintaining treaty obligations at a time when the United States was committed to rebuild the war-torn economies of Germany and Japan. The money which had been going to Indian reservations would be better spent, they felt, in Germany and Japan.

Furthermore, they argued, Indians needed to be assimilated into mainstream American society. After all, they often argued, the Germans, Italians, Irish, Poles, and many others had successfully assimilated when they came to this country and therefore Indians should be able to do the same. To make their arguments sound more reasonable they talked about “freeing” Indians from the reservations. They didn’t point out that once Indians were “freed” from their reservations, then the natural resources on these reservations would be “free” to be developed by non-Indian corporations.

The philosophical milieu which nourished relocation fever among non-Indians stemmed from two twentieth century world views. The first was that of anti-communism. In the minds of many people Indian reservations, which were communally held lands, were communistic and therefore inherently evil and, more importantly, un-American. Secondly, many western politicians, responding to the expressed desires of corporate interests, saw Indian lands as impediments to economic development. Since Indians could not develop these lands, they reasoned, they should be opened up for development to those who could develop them. Once the Indians were off the reservations, then non-Indians could once again economically benefit from lands which had once belonged to the Indians.

As a part of this program of “assimilation” and “freeing the Indians,” the Bureau of Indian Affairs embarked on a program known as “relocation.” The logic behind the program was rather simplistic: (1) there were jobs in the cities, (2) Indians were on reservations, (3) move Indians to the cities. Thus the “Indian problem” would be solved.

In 1951, the Bureau of Indian Affairs (BIA) opened four urban field relocation offices-Los Angeles, Denver, Salt Lake City, and Chicago-and began to pressure Indians to move to the cities. Migration always involves two basic factors: (1) the push factors which make people want to leave their homes, and (2) the pull factors which are the dreams of better things somewhere else.

Unemployment is a major push factor for migration. To increase unemployment on the reservation, the BIA contracted most services to non-Indian companies and thus drove up unemployment.

To enhance the pull factors, the BIA painted glowing pictures of city life and all of the amenities that came with it: high-paying jobs, nice homes, modern household appliances, good schools, etc.

Once convinced (coerced), Indians were given one-way bus tickets to the city. When they arrived in the city, Indians found no help, no training, no housing, and no good-paying jobs. The BIA hadn’t bothered to find out if there were actually jobs in the cities and Indians were frequently sent to areas of high unemployment.

The BIA also ignored the skills that Indians would need to obtain urban jobs. There was no job training, no attempt to match Indians to specific jobs before they left the reservation. While the BIA sometimes touted this as a “jobs” program, it is clear they had no clear understanding of the employment market. While the BIA gave lip service to the idea that relocation was about jobs, in reality, the practice of relocation had little to do with jobs. It was based on the philosophy that reservations were bad and that Indians must be removed from them.

While Indians were often under the impression that there would be some services in the city to help them with finding work and housing, the BIA  did not actually provide any services for the relocated Indians. From the BIA perspective, once the Indians were off the reservation they were no longer a BIA concern. It was simply assumed that the free market would take care of the new arrivals.

Beyond bus or train fare to the city, the relocation program provided limited subsistence. Initially, this subsistence program was for two weeks and was later extended to three weeks. While the BIA wanted to make sure that the relocated Indians had money for food and bus fare, they did not want them to have money for cigarettes, phone calls, newspapers, or recreation.

The BIA envisioned relocation as a way of emptying the reservations and BIA officials were often dismayed as Indian people began to return home. The BIA had assumed that Indians, once in the city, would remain there. Many Indians, on the other hand, coming from cultures in which nomadism is valued, simply saw the cities as temporary residences. To counter this trend, the BIA tried to send Indians to cities as far from their reservations as possible.

In 1958 the General Accountability Office evaluated the relocation program and concludes that: (1) the areas selected for relocation did not offer adequate opportunities for Indians, (2) Indians were not adequately prepared for relocation, and (3) no standards for selecting relocatees had been established by the BIA.

Relocation also failed to take into account the cultural importance of the reservation. In the minds of the non-Indian planners, Indian religion and Indian spirituality did not exist. Therefore, they failed to understand the spiritual and religious ties which tribal members have with their reservations. They failed to understand that Native American spirituality is not based on spaces and monuments created by human beings, but instead is focused on natural elements found outside of the cities.

The BIA wanted to use relocation as a means of destroying tribal identity. In a number of cities, relocation created new Indian ghettos filled with Indians from many dissimilar tribes. With this melting pot from many different tribes, many began to identify ethnically as “Indian” rather than as their tribal affiliation. The urbanization of Indians began to create a sense of pan-Indian identity leading to the creation of urban Indian centers and organizations such as the American Indian Movement (AIM).