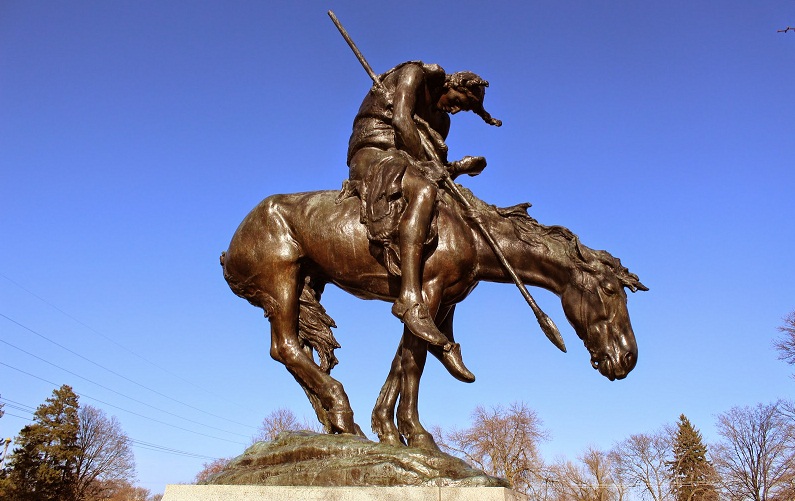 At the beginning of the twentieth century it was commonly felt that American Indians were a vanishing people. The stereotype of the Indian is symbolized in James E. Fraser’s equestrian statue, “The End of the Trail,” first shown at the San Francisco Exposition in 1915.

During the first decades of the twentieth century American Indians were sometimes put on display as living museum relics of a mythical past, a past that had been conquered by American material, martial, and moral superiority. There was an audience demand to see Indians dressed as Indians were supposed to have dressed in the mythical past doing those sorts of things the audience thought they were supposed to have done. At the same time, the American government through the Bureau of Indian Affairs (called the Indian Office at this time), in an attempt to kill Indian culture, attempted to prohibit Indians from dancing traditional dances, wearing traditional clothes, and, most of all, from having long hair.

In 1902, the Bureau of Indian Affairs (BIA) told its reservation agents:

“You are therefore directed to induce your male Indians to cut their hair.”

According to the Commissioner of Indian Affairs:

Indian men with long hair were to be denied rations. If they still refused to cut their hair, “short confinement in the guardhouse at hard labor with shorn locks, should furnish a cure.”

Indian agents were also instructed to stop Indians from using face paint. According to the Commissioner of Indian Affairs:

“The use of this paint leads to many diseases of the eyes among those Indians who paint. Persons who have given considerable thought and investigation to the subject are satisfied that this custom causes the majority of cases of blindness among the Indians of the United States.”

In addition, Indian dances and feasts were to be prohibited. According to the BIA:

“Feasts are simply subterfuges to cover degrading acts and to disguise immoral purposes.”

The Railroads and Indian Ethnic Tourism:

To encourage tourism in the southwest, the Santa Fe Railway in 1900 promoted the Hopi snake dance as a tourist attraction and published a pamphlet on the dance written by a Smithsonian anthropologist, Walter Hough. The pamphlet reassured tourists that even though the Hopi performed the lurid Snake dance, they were not dangerous. It reminded readers that Indians were living examples of the childhood of man. While the Religious Crimes Code made ceremonials such as the snake dance illegal, it was not enforced against the snake dance because the railroad promoted it and the tourists demanded to see it.

The Fred Harvey Company formed an Indian Department in 1902 which bought and sold Indian-made objects. The Indian Department also published postcards featuring Indians, souvenir books, and pamphlets. They also opened the Indian Building in Albuquerque. The building was located between the Santa Fe Railway depot and the Alvarado Hotel so that passengers from the railroad passed in front of the building where Indians displayed their works, then through the Indian Museum, and into a curio shop.

In 1905, the Fred Harvey Company completed the El Tovar hotel at the Grand Canyon to accommodate tourists brought in by the Santa Fe Railway. Near the hotel, Harvey Company built Hopi House, a three-story structure designed to look like a cluster of Hopi dwellings where guests were able to purchase curios and watch Indians demonstrate their craft skills and dancing.

The famous Hopi potter Nampeyo and her family were among the first to live and work at Hopi House. The promotional material for one photograph reads:

“These quaintly-garbed Indians on the housetop hail from Tewa, the home of Nampeyo, the most noted pottery-maker in all Hopiland”

“They are the most primitive Indians in America, with ceremonies several centuries old.”

The use of the Hopi as a tourist attraction at the Grand Canyon did not work as smoothly as the non-Indian organizers had envisioned.  The organizers expected the Indians to leave their homes willingly upon request and to stay at Hopi House until replacements for them could be found. The Hopi were expected to make baskets and pottery for sale, to work around the store packing and cleaning, and to dance for the tourists at night.

The Louisiana Purchase Exposition was held in St. Louis in 1904. The federal government built a Model Indian School to show that Indian children

Students from Chilocco, Haskell, Genoa, and Sacaton Indian Schools lived at the school. Girls from Chilocco demonstrated modern techniques for handling laundry work while boys from the school ran a print shop which produced a daily newspaper. Boys from Haskell demonstrated building wagons and blacksmithing skills while the girls demonstrated the domestic arts of sewing, tailoring, and millinery. The boys from Genoa fashioned harnesses. About 30,000 visitors a day passed through the Model Indian School.

One of the feature attractions was the Fort Shaw Indian School basketball team which played against local and regional championship teams and was crowned the World’s Champion Girls’ Basketball Team. According to comments in the visitors’ book, the Fort Shaw girls were one of the major reasons for the popularity of the Model Indian School.

The purpose of the anthropology section of the exposition was

“to satisfy the intelligent observer that there is a course of progress running from lower to higher humanity, and that all the physical and cultural types of man mark stages in that course.”

Following the model of social evolution popular at the time, European-Americans were depicted as the highest form of humanity and Indians were shown toward the bottom of the scale. The Kwakiutl were “living examples of the dominant influence of environment on primitive life” while the Cocopa were an example of a group “least removed from the sub-human or quadrumane form.”

The exposition included an Indian village which housed representatives from about 20 different tribes. The tribes were arranged in an evolutionary fashion from the least civilized to the most civilized, with the Indian school forming the apex of civilization.

Commercial exhibits at the Louisiana Purchase Exposition sold Indian curios and provided special exhibits. In these exhibits, the Zuñi were billed as “the last of the Aztecs” and the Pueblo of Taos was inhabited by Hopi and Zuñi. The exhibits were inaccurate and reinforced common stereotypes about Indians. First, the Zuñi were not related to the Aztec culturally or linguistically. Second, while Taos is considered a pueblo like Hopi and Zuñi, Taos is culturally and linguistically distinct from these two groups.

Among the Indian artists at the Exposition were Maria and Julian Martinez, potters from San Ildelfonso Pueblo in New Mexico.

Apache leader Geronimo, the last Indian leader to be held as a prisoner of war, was allowed to be exhibited at the Exposition and to sell his signature. Cheyenne artisans constructed a special tipi for Geronimo and his band. Geronimo’s Apache were not Plains Indian and did not historically live in tipis.

In Chicago, the Chicago Tribune sponsored a second United States Land and Irrigation Exposition in 1910. The Santa Fe Railway and the Fred Harvey Company, promoting travel to the southwest, constructed a building for the Hopi. The Fred Harvey Company requested that the superintendent of the Hopi Reservation provide them with one family from each of the three Hopi mesas. The women were to make baskets and pottery and the men were to weave blankets, kilts, and sashes. The company asked that only two children be allowed to accompany each family and that the girls must have their hair done in whorls, that the men wear moccasins, velvet shirts, and bandanas around their foreheads, and that the women wear traditional Indian costumes.

In 1909, the Alaska Yukon Pacific Exposition was held in Seattle. Among the exhibits was the Utah Building which was a replica of a section of a Hopi Pueblo. It should be pointed out that the Hopi Pueblos are in Arizona, not Utah.  Visitors, however, blissfully unaware of this inaccuracy took delight in visiting the Utah Building, which was a unique pueblo that housed Native American handicrafts.

The Eskimo Village exhibit included 100 Native people brought to Seattle so that visitors would be able learn about the aboriginal northern inhabitants. As a part of this exhibit, the Natives put on dogsled rides, dances, and canoe races. The exhibit did little to counter the common misconceptions that Eskimos were wild, had no laws or government, and knew no god.

Judge and Mrs. Thomas Burke held a reception for Indians attending the Alaska Yukon Exposition. An all-Indian band played for the guests. Mrs. Burke was attired in a white buckskin outfit from the Klickitat tribe and Mrs. Jay Lynch, the wife of a former Indian agent for the Yakama Reservation, was similarly attired. A young woman from the Puyallup Indian school identified only as Bright Eyes dressed in traditional tribal attire and sang several songs.