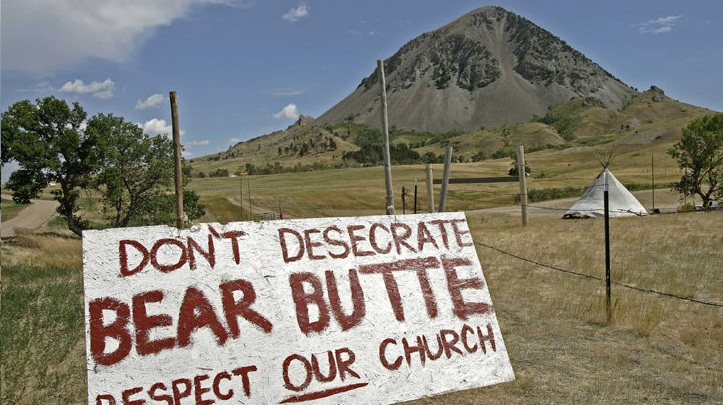 A Report on the Hearing of SD House Bill 1309

Defenders of the Black Hills

The state of South Dakota should be ashamed of nine of the thirteen members of the SD House Commerce Committee for the behavior they exhibited during the Hearing on House Bill 1309, entitled “An Act to prohibit the issuance of certain alcoholic beverage licenses for establishments located near Bear Butte.” For the past thirty years, I have participated at various state committee hearings on a number of issues and never have I witnessed such outrageous behavior. It was like watching a bunch of drunken fans hollering at an opponent in a game.

Maybe that was why the time of the hearing on HB 1309 was changed in the schedule from first on the agenda to the last place so there would not be many witnesses to such outrageous behavior. Or was the change made specifically because it was a Bill that was of importance to Native American people and was put at the end of the meeting so that the public would have only a little time to comment. Yet, during the hearing, when two wealthy businessmen gave their comments, even when their comments were off topic as one mentioned, they were allowed to ramble on and on. One of the businessmen gave a lengthy discourse of misinformation about Native Americans, misinformation that had nothing to do with the subject matter of the Bill and was never cautioned about staying on topic. The proponents of the Bill, on the other hand, were told to keep their comments short. One Native American speaker brought statements from seventeen other people from around the world, and stated she would only present a few because of the time constraints. She was allowed to present only one statement. The racism exhibited toward the Native American speakers was blatant.

At the very beginning of the hearing, Representative Jim Bradford amended the Bill which he sponsored. His amendment limited the one-mile alcohol-free area to begin at the top of the sacred mountain, Bear Butte, instead of one-mile away from the perimeter as was stated in the Bill. Beginning from the top of the mountain, the area in the Bill encompassed mostly state and tribal land with a small portion from an area that is to have an agricultural easement, and an existing campground. The Bill already stated it would not affect existing permits. Although the amendment dismayed many proponents who heard it for the first time at the Hearing, they understood the reasons for the change and continued to support the Bill.

Four of the committee members, Representatives Ahlers, Engels, Street, and Nygaard, are to be praised for their extreme patience in sitting in a meeting in which their colleagues exhibited such disrespect to their efforts to submit additional amendments to the Bill. Toward the end of the hearing, Rep. Ahlers finally asked the other committee members to accept only one-half mile from the top of the sacred mountain stating, “This is only a sign of respect” as the land would be almost entirely public land. The other nine loudly hollered, “No!” as they had done time and time again to previous offers of amendments. After shouting their loud, disrespectful “Nos,”… then they would laugh.

To all the people who submitted comments, Thank you. To those who endured this appalling behavior in a respectful manner, you are to be commended. To the sponsors of HB 1309 and the four House Commerce Committee members who tried to have a little respect given to sacred Bear Butte, you will be blessed.

NOTE: Defenders of the Black Hills was not a part of the protests held at Bear Butte more than a year ago precisely because the mountain is such a sacred place. We did not participate because of recommendations from our spiritual advisors. There is an understanding among all traditional Native American cultures that the circle will always come back, although not necessarily in the form that started it. The consequences for the behavior exhibited by the disrespectful nine members of the South Dakota House Commerce Committee will also fall on those they represent all over the state. We understand that the disrespect they gave was not to us as human beings, but to the sacredness of Bear Butte. It is now out of our hands. Ktso. (It is so.)