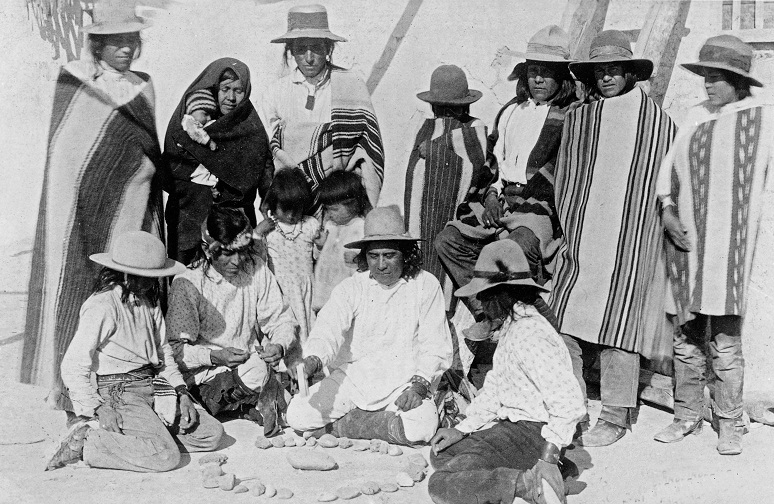 In 1680, the Pueblo Indians of what is now New Mexico united in a revolt against the Spanish. As a result the Spanish were driven from the area. Not all of the Pueblos, however, joined in the revolt. The Tiwa-speaking pueblo of Isleta did not join the Pueblo Revolt and 1,500 Spanish settlers from the lower river area took refuge in this pueblo before fleeing south into Chihuahua, Mexico.

The Spanish re-conquest of the New Mexico Pueblos began in 1681. At Isleta the Spanish found a thriving community with the church in ruins. The villagers told the Spanish that they did not want any visitors. The Spanish, however, were not deterred and forced their way into the pueblo. Here the pueblo leaders approached their guests peacefully. The Spanish threw all of the Pueblo ceremonial masks, ceremonial clothing, prayer sticks, and katcina dolls into a flaming pyre. They baptized the babies born in the past year and sent messengers to the other Pueblos promising pardon and demanding submission. The initial Spanish attempt at re-conquest was not successful and they burned the village of Isleta. They took 385 people from Isleta as captives with them as they retreated to El Paso.

When the retreating Spanish soldiers arrived in El Paso with their Indian captives, the Franciscans established three new pueblos for Indians: Senecu, Socorro, and Ysleta. Each pueblo was named for its old pueblo and given the designation of del sur (“of the south”). Thus the people from Isleta, later known as the Tigua, came to live in Ysleta del Sur.

In 1751, the Tigua were given canes by the Spanish which symbolized the recognition of their sovereignty. The Spanish Crown also provided them with a land grant totaling 17,712 acres. The land grant was intended to provide the Tigua with a permanent and protected land base. This would safeguard them from threats posed by non-Indian encroachment and would afford Pueblo governors some measure of authority and sovereignty. The Tigua reestablished their ceremonial and political life around the mission church at Ysleta del Sur.

Ysleta del Sur went from being a part of the Spanish Empire to being a part of Mexico, and then, following a brief war between the United States and Mexico, it became a part of the United States. In 1850 Congress passed an Organic Act which established the boundaries of Texas. With this Act, El Paso became a part of Texas which meant that the Tigua in Ysleta del Sur were now in Texas. The Tigua were thus separated from the other Pueblos in New Mexico.

In 1895, the Tigua established a compact which set forth some rules and regulations regarding the government of their pueblo. The officers for the pueblo, according to the compact, were the cacique, lieutenant-cacique, governor, lieutenant-governor, war captain, and subordinate war captains. José Tolino Piarote was the cacique who served for life as both chief and spiritual leader. As with the New Mexico pueblos, the governor carried a staff of office. The war captain preserved order at the public dances and regulated hunts.

In 1935, Tigua Cacique Manuel Ortega lamented that the title to their Spanish land grant had been lost and stated:

“Our neighbors soon learned of the loss, and, denying our ownership, gradually usurped our rights.”

In 1956, the city of El Paso annexed Ysleta, the home of the Tigua. The annexation meant that the Tigua, who had inhabited the pueblo for centuries, now had to pay city property taxes. The property taxes were more than $100 per year in a community in which the average annual income was less than $400. The Tigua maintained that their land was part of a Spanish land grant and was thus exempt from taxation as the land grant implied sovereign status.

In Texas, the mayor of El Paso wrote to the Bureau of Indian Affairs (BIA) voicing the opinion that the Tigua should have the same rights, privileges, and protections as other American Indian tribes. In response to this letter, the BIA pointed out that with one exception (the Alabama-Coushatta) the federal government had never assumed responsibility for any Indian tribe in Texas. According to the BIA, Texas entered the Union as a fully self-governing state and thus there were no public domain lands nor any trust responsibility for any tribes living upon them.  Alan Minter, the Assistant Attorney General of Texas, wrote:

“When Texas became a state in 1845, it was the beginning of the end for the Indian.”

In 1965, attorney Tom Diamond began an inquiry on the status of the Tigua. He was told by anthropologists that the Tigua were extinct. The Tigua, however, maintained that their culture still existed. The problem for outsiders, such as anthropologists, was that Tigua culture had changed and it had been kept hidden from the surrounding non-Indian community.

The following year, Tom Diamond, acting as the attorney for the Tigua, notified the city of El Paso that tribal members would no longer be responsible for taxes to any local division of government. The notification was based on the fact that the Texas Legislature in 1854 recognized that the Tigua held title to the Ysleta Land Grant. Local authorities were cooperative and receptive to the Tigua claim.

In 1966, a study by University of Arizona anthropologist Nick Houser showed that the Tigua were still a culturally distinct Indian tribe. The Texas State Historical Survey Committee acknowledged the accuracy of the report and passed a resolution stating that the tribe was entitled to federal recognition. The following year, the Tigua of Yselta Del Sur were recognized as an Indian tribe by the state. At the recognition hearing, Cacique Jose Granillo performed ceremonial songs. Isleta Pueblo governor Andy Ayeta testified that the Tigua ceremonial songs were identical to those performed in Isleta. The National Congress of American Indians also supported the Tigua claim for recognition. State recognition made the tribe eligible for a tax-exempt reservation as well as special state programs.

In 1968, the Tigua were given limited federal recognition through Congressional action. While the federal act recognized the Tigua as Indian people, it denied them federal services and transferred any federal responsibility to the State of Texas.

In 1985, the Tigua sought full federal recognition through Congressional action. The bill which would give them federal recognition was supported by the Isleta Pueblo (to whom they are related), the All Indian Pueblo Council in New Mexico, the Kiowa, the National Congress of American Indians, and the National Tribal Chairmen’s Association. Unfortunately, the bill got tangled up with the national debate on Indian gaming. Two years later, however, Congress did give the Tigua federal recognition.  The restoration act passed by Congress requires that tribal members have at least 1/8 Tigua blood quantum.

With federal recognition came the right to operate gaming facilities and in 1993, the Tigua opened their Speaking Rock Casino. Most of the residents in the El Paso area supported the casino.

In 1998, the Tigua made a small contribution to a gubernatorial candidate who was well-known for his support for Indian tribes. In response, the campaign team for Governor George W. Bush called Indian tribes the same as drug dealers and called for the other candidate to return the money. An article in Indian Country Today (October 2001, p. A3) quotes Bush’s press secretary as saying:

“If he wouldn’t take money from drug dealers, why would he take it from Indians?”

The political problems of the Tigua increased and in 1999 a candidate for mayor of El Paso aired a series of commercials claiming that the Tigua did not pay taxes. The Tigua responded with a series of ads pointing out that 80% of the tribal members lived off the reservation, that they paid sales taxes, and the Tigua provided the city with both property and sales tax revenues.

The 1987 Congressional Act which gave the Tigua federal recognition required any changes in tribal enrollment requirements to be approved by Congress. Thus, in 2000, the Tigua asked Congress to change the required blood quantum for tribal membership from 1/8 to 1/16. Moments before the Senate was to vote on the measure, one Texas Senator had the bill withdrawn from consideration. The Pueblo’s governor, Albert Alvidrez, commented:

“Texas has a long record in promoting segregation, racism, and failing to recognize the contributions Native Americans have made in this country and our rights as indigenous people. The genocide and government eradication of Native Americans in this state is a hallmark of Texas politics.”

Without the change in blood quantum it was estimated that tribal enrollment would fall to a handful within three generations.

In 2001, a state court ruled that Indian tribes, including the Tigua, have no more rights in Texas than do associations and ordered the tribal casino to be shut down. While the tribe argued that gaming was allowed under the 1987 Pueblo Restoration Act, the judge declared that there were no Indian tribes in Texas because the state legislature appropriated all Indian lands in 1871. The following year, the U.S. Circuit Court of Appeals ruled against the Tigua and upheld the earlier ruling. As a result of this ruling, the Tigua closed their profitable casino.