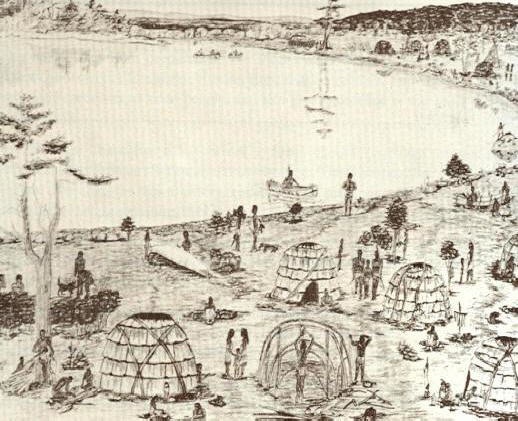 While the Indian nations in what is now Maine may have had some limited contact with Europeans as early as 1480, regular contact began in the sixteenth century and intensified during the first half of the seventeenth century. During this time, the Indians began to incorporate aspects of European culture, such as trade goods, into their own lifestyles. These early contacts were with four broad categories of Europeans: fishermen, explorers, missionaries, and colonists.

By 1519, European fishing boats were trading with the Micmac in Maine and the Maritime Provinces. By 1524, ships were crossing over from Europe in increasing numbers, first to fish offshore for the great schools of cod, and eventually to trade with natives for furs.

During the early part of the seventeenth century,   English ships scouted the coast from Maine to Cape Cod, trading with Indians and gathering sassafras roots which were prized in Europe as a treatment for syphilis. In 1602, off the coast of Maine, the crew of an English ship saw people in a European boat – described as a Biscay shallop – sailing toward them. They assumed that the eight men in it must be Europeans. However, all were Indians. The Indians, using a piece of chalk, drew a map of the Maine coast for the newly arrived English sailors.

Sailing shallops could be fairly large: up to 12 tons and forty feet in length. Many had more than one mast. Regarding the adaptation of this craft by Indian people, the Jesuit missionaries noted that the Souriquois handled them “as skillfully as our most courageous and active sailors in France.”

There are a number of other reports of Indians using the European shallops. In 1606, for example, the Souriquois under the leadership of Membertou raided other Indian villages using sailing shallops. The following year, the English on their way to establish their colony on the Kennebec River encountered two sailing shallops being used by Souriquois under the leadership of Membertou. The Souriquois offered skins for trade and the English noted that the Indians seemed to be using a lot of French words.

Giovanni da Verrazano, an Italian working for the French, explored the North America coast from the Carolinas northward to Maine in 1524.  In Maine, Verrazano found that the Indians were not particularly friendly. They appeared to have already had some contact of an unpleasant sort Europeans. The following year, a Spanish expedition led by the Portuguese pilot Estévan Gomes landed near the River of Deer in Maine and took 58 Indians captive.

In 1580, the English adventurer John Walker landed in Penobscot Bay. He took about 300 moose hides from an unattended building. Such a large concentration of moose hides in a single structure meant that the hides were intended not for the local consumption, but were actually intended for export: that is, to be traded to Europeans.

In 1602, the English explorer Bartholomew Gosnold landed at “Savage Rock” (Cape Elizabeth) where he encountered some Micmac. The European explorers found that the Indians were wearing large copper breastplates and European costumes including shoes, waistcoats, breeches, and hose. The following year,  English explorers under the leadership of Martin Pring encountered a group of Indians near present-day Saco. They reported that some of the Indians had brass breastplates which were a foot long and about half a foot wide.

In 1604, the French explorer Samuel de Champlain sailed up the Penobscot River. Near the site of present-day Bangor, he made contact with the Wabanaki under the leadership of Bashabes. From Bashabes the French learned a great deal about the interior of Maine. Bashabes, wanting French partnership in the fur trade, provided Champlain with guides. While the French were looking for the fabled Indian city of Norumbega, they found that the city was a myth. The French did, however, gain a great deal of information about the interior between Kennebec Basin and the St. Lawrence. Getting around the language barrier, the Indians drew maps on sand and bark for the French.

The French next explored Saco Bay where they saw and recorded on their chart an Indian corn-growing settlement. On the Saco River they were met by Indians who painted their faces black and red. The Indians were a farming people who raised corn, beans, squash, pumpkins, grapes, and tobacco. Champlain’s Etchemin guides called the people at this village Archmouchiquois and they called the village Chouacoit. The area surrounding the village contained many small hamlets.

In 1609, Henry Hudson met with Indians in Penobscot Bay. The Indians told him that they traded with the French. A few days later, two French shallops filled with Indians sailed into the harbor bringing many beaver skins and other furs for trade. Hudson was not equipped for trade, so he simply resorted to force to obtain the furs. His men captured one of the shallops and took the Indian furs.

The first European attempt to establish a colony in Maine came in 1604 with the arrival of French colonists who attempted to settle on the Sainte Croix River. The settlement soon moved to the present-day Annapolis-Royal in Nova Scotia.

The English established a trading camp on the Kennebec River in 1605. The expedition was funded by Sir Ferdinando Gorges, captain of the Port of Plymouth. At the end of the trading season, the English kidnapped five Abenaki and took them to England to turn them into guides and interpreters. The Abenaki captives were not to be sold into slavery, but they were exhibited as curiosities. They were also studied by Gorges, who wished to learn more about the new land to the westward and its inhabitants. Among those taken by the English was Tisquantum, also known as Squanto, who later becomes an important figure in Massachusetts history.

The purpose of the new colony was to find precious metals and spices, establish a fur trade with the Native Americans, and show that New World forests were a limitless resource for English shipbuilders. Concerned about the possibility of a French attack, the colonists built an earthenwork fort, which they called Fort St. George. The fort was fortified with eight cannons.

In one instance, five Abenaki, including Skidwarres and the leader Nahaneda, showed up at the fort. They joined the colonists for both food and church services. They had to endure public prayers both morning and evening. They told the English that King James was a good king and that his God was a good God, but that Tanto (their own deity) had commanded them to avoid contact with the English.

The English soon managed to anger their Abenaki neighbors so that trade between the two groups had to be suspended. There were a number of minor skirmishes in which 11 colonists were killed. The English basically bungled their opportunity to establish influence with the Abenaki.

In 1608, the English abandoned their colony on the Kennebec River. The re-supply ships from England found that the colonists had successfully traded with the Indians for furs, gathered the herbal cure-all sarsaparilla, and built and launched a 50-foot ship. However, the colony’s leader upon discovering that he was the heir to an immense fortune decided to return to a lavish castle in England.

Part of the motivation for the European invasion of North America was to acquire converts to their religion. The Jesuits arrived in New France in 1611 and began to learn the native languages as a way of carrying their message to the people. Unlike other Europeans, the Jesuits did not want land or furs: they asked only to live in an Indian household that they might study the language. While the Jesuits were well-liked because of their quiet manners, the Indians felt that these men were poorly educated because they had not learned that God made all religions, and they came here to tell the people who already believed in a Creator that such a One exists. Two years later, the French priests built a mission for the Penobscot at Bar Harbor, Maine.

In 1635, the Capuchin Catholics established a small church at Pentagoet to proselytize among the Penobscot. The priests learned the local language.

In 1642, Charles Meiaskwat, a Montegnais lay preacher, visited the Abenaki at Norridgewock. The following year, an Abenaki from Norridgewock went to Quebec with Charles Meiaskwat so that he could be converted to Christianity. As a convert he was given the name Jean-Baptiste and he returned to his people to proselytize. Three years later, Jean-Baptiste returned to Quebec claiming that he had 40 potential converts at Norridgewock and asking that a black robe (Jesuit priest) be sent to instruct them.

In 1646, the French Jesuit Gabriel Druillettes began working with the Abenaki. He emphasized steady prayer and quiet nurturing of the sick which contrasted to the traditional religion which was quite animated. On one occasion he offered Mass with a fervent beseeching of God to relieve the hunger of his traveling party. Right after Mass, the Abenaki killed three moose. This impressed the Indians with his apparent ability to deliver results.

In a typical Jesuit approach to the Indians, Druillettes learned the Abenaki language. He impressed many Indians, and his visit established a link between the Abenakis and Quebec that would continue for many years.

One of the unintended consequences of contact between Europeans and Indians was epidemic disease which often decimated the Indian populations. In 1610, an epidemic struck the Souriquois at La Have taking at least 60 lives.

The first of three epidemics struck the Indians of New England in 1616. It is estimated that 75% of the population died between 1616 and 1619.  The epidemics swept from Cape Cod to the Kennebec River in Maine. The epidemics started after an English party wintered at the mouth of the Saco River. While it is not known what the actual diseases were, various historians have suggested bubonic plague, smallpox, and hepatitis A as possibilities.

A new disease which produced bloody vomiting broke out among the Abenaki in 1646. This outbreak may have contributed to Jean-Baptiste’s missionary success.

The Archaeology of Head-Smashed-In, Alberta

Some Artifacts from the Columbia Plateau (Photo Diary)

Changing Technologies and Trade in California