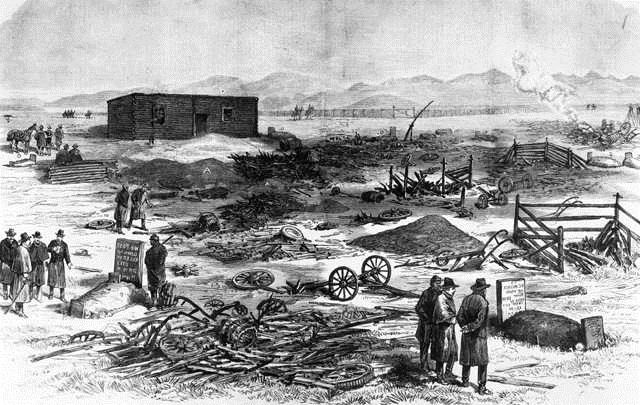 American government policies regarding Indians on reservations during the 1870s encouraged the total destruction of Indian cultures. The application of these policies varied from reservation to reservation according to the amount of tolerance which the Indian agent, usually designated by a Christian missionary group, exhibited toward Indian cultures. In Colorado, the rigid intolerance of one Indian agent on the Ute Reservation resulted in an Indian uprising and a brief battle called the “Meeker Massacre” by historians.

Nathan C. Meeker was appointed as Indian agent for the Utes on the White River, Colorado reservation in 1878. As with many Indian agents of this era, Meeker had no experience with Indians. He had, however, experience in organizing a utopian religious community in 1869. With this background, his goal in working with the Utes was to convert them into hard-working, God-fearing savages.

In 1879, Meeker, complained to the Commissioner of Indian Affairs about Indian horses:

“The practice of these Indians in keeping and holding horses on an extensive scale is not only discouraging to farm industry, but is working a most serious inconvenience, if not loss, to cattle interests.”

The Utes, however, prided themselves in their wealth in horses. A month later he wrote:

“It seems to me evident that the greatest obstacle to civilizing the majority of these Indians is their ownership of horses, which is proved by the fact that those who work have either few or no horses.”

He pushed the people to become Christians, to build houses and fences and to farm. When he insisted on plowing the field which had been used as a race track, the Ute fired warning shots. Meeker responded by sending for the army. According to Meeker’s report:

“This is a bad lot of Indians. They have had free rations for so long and have been flattered and petted so much, that they think themselves lords of all.”

The Ute feel that calling for the army was a declaration of war. Their scouts led by Nicaagat met the army outside of the reservation and warned them that the treaty prohibited the army from entering the reservation. The soldiers continued their march in battle formation and were attacked. The army force was surrounded and held for several days until they were rescued by a troop of black cavalry.

Ute warriors also attacked the Indian agency, killing 11 men, including Indian agent Meeker. The warriors took several women captive in order to secure their own safety as they fled. Among those held captive were Meeker’s wife and daughter.

In a week-long battle, 12 soldiers were killed and 43 were wounded, while 37 Ute were killed. This short war was soon labeled the “Meeker Massacre” in honor of the heavy-handed Indian agent.

As a result of the “war,” one newspaper in Colorado launched a campaign under the banner “The Utes Must Go”. The response of the Anglos was to call for the “red devils” to be wiped out. The governor called for the removal or extermination of the Ute:

“My idea is that, unless removed by the government, they must necessarily be exterminated.”

The Ute soon surrendered. Ute leaders Ignacio, Buckskin Charlie, Severo, and Ojo Blanco traveled to Washington, D.C. where they agreed to be relocated to another reservation in Utah. Their former reservation of 12 million acres was to be opened to settlement by non-Indians.

Army officer J. Scott Payne, writing in 1880, reflected on the causes of the Ute war:

“The great trouble is to be found in the teachings of men-benevolent, but totally ignorant of the subject with which they are dealing-who, in the spirit of evangelism, desire to civilize the savage by filling his stomach with food and his heart with religion, both processes to be carried on without the constant presence of force, the only thing for which the Indian entertains respect.”

“The truth is that by force and force alone, tempered, to be sure, by mercy, but that mercy exercised judiciously and sparingly, can his wild nature be kept under control.”

Following the “Meeker Massacre”, the army held a hearing to determine the causes of the Ute war. General Charles Adams concluded that the war was the result of a few young hotheads, but he went on to say:

“I cannot excuse the action of those cowardly dogs who went to the agency and shot from the roofs of the houses, like birds from trees, the white men who were not dreaming of danger, and who certainly had given the Indians no cause to be killed, even if you will have it so that Agent Meeker deserved death at your hands.”

General Adams then demanded that the Ute surrender to him the men involved so that they could be tried. Before the Ute leaders had finished discussing the matter, General Edward Hatch told them:

“This is the decision of the government, and if complied with will prevent the final struggle with the Indians, which must, in the end, result in their utter destruction, forfeiture of all their treaty rights, and loss of their lands.”

Ouray replied for the Ute:

“We will not give these twelve men over to you to be tried by a court of Colorado, where no justice will be shown them. We will give over these men only if they can be tried in Washington, where I know I have at least one friend.”

The army was then told to accept the surrender of the warriors to stand military trial outside of Colorado and New Mexico. However, the Indians were not to be brought to Washington, D.C. for trial, but were to be taken instead to Leavenworth, Kansas. The Ute were not advised of this plan.

A delegation of Ute chiefs then started for Washington, D.C. to meet with Congress. Chief Douglas, however, was jailed in Leavenworth to await trial.

In 1880, the Whiteriver Ute were relocated to the Uintah Reservation in Utah to live among the various Utah Ute bands. Under the agreement with the federal government, the bands were to have a perpetual trust fund and funds from the sale of their homelands were to be credited to their accounts. The federal government, however, made no attempt to sell the Ute lands and they remained in government possession. Thus no funds were credited to their account and no trust fund was established.

In Utah, Ute leader Ouray was disgusted by the actions of the United States against his people. He put aside his Anglo clothing and returned to wearing the traditional Ute breechclout. A sick and broken man, he died in a Ute lodge. Buckskin Charlie, designated by Ouray to become the new chief, and several others buried Ouray’s body in a rock crevice. In accordance with traditional Ute burial customs, three of Ouray’s horses were killed on the spot, and then the burial party quickly departed from the grave site.