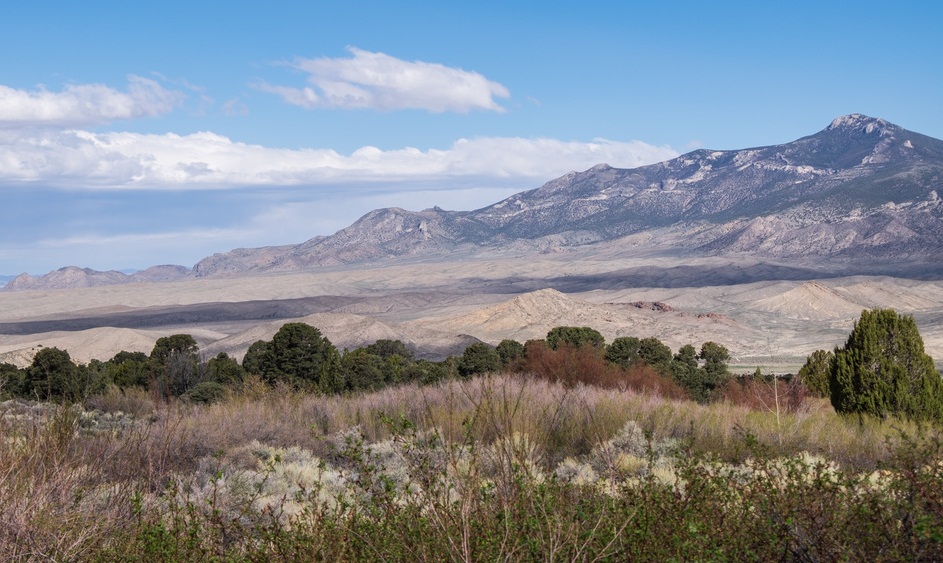 The Great Basin is an area that includes the high desert regions between the Sierra Nevada and the Rocky Mountains. It is bounded on the north by the Columbia Plateau and on the south by the Colorado Plateau. It includes southern Oregon and Idaho, a small portion of southwestern Montana, western Wyoming, eastern California, all of Nevada and Utah, a portion of northern Arizona, and most of western Colorado. Today this is an area which is characterized by low rainfall and extremes of temperature. The valleys in the area are 3,000 to 6,000 feet in altitude and are separated by mountain ranges running north and south that are 8,000 to 12,000 feet in elevation. The rivers in this region do not flow into the ocean, but simply disappear into the sand.

Archaeologist Jesse Jennings, in his introduction to Great Basin prehistory in the Handbook of North American Indians, reports:

“Instead of being the uniformly uninviting desert so often visualized, the Great Basin consists of hundreds of special and often rich environments where a widely varying mix of desired plant and animal species was available for harvest.”

In their book The Wintu and Their Neighbors: A Very Small World-System in Northern California, Christopher Chase-Dunn and Helly Mann report:

“It is an ecologically sparse environment punctuated by small areas where water, game, and plant life are abundant.”

In her book Indians of the Plateau and Great Basin, Victoria Sherrow reports:

“Summers in a Basin desert can be fiercely hot, the winters bitterly cold. The land is unfavorable for farming and contains little game for food.”

This is an area which seems inhospitable to human habitation, yet Indian people have lived here for thousands of years. This was the last part of the United States to be explored and settled by the European-Americans. In writing about the early Indian settlement of the Great Basin, archaeologist Jesse Jennings, in his book Prehistory of Utah and the Eastern Great Basin, notes:

“They have, nonetheless, a certain reality in that they are distinguished on the basis of artifact inventories and, particularly, the variable adaptations made to local environments.”

The period from about 10,000 years ago until about 1,500 years ago (from about 8000 BCE to 500 CE) is called the Archaic by archaeologists. This is a period of time at the end of the geologic Pleistocene epoch and the beginning of the Holocene epoch. In the Great Basin during this transition, lakes grew smaller, rivers dried up, springs stopped flowing, and the megafauna—camels, mammoths, horses, and others—went extinct.

With regard to terminology, Alan Schroedl, in an article in the Utah Historical Quarterly, writes:

“The name Archaic is not meant to imply a backward or outmoded style of life; on the contrary, the Archaic lifeway was the most dynamic and flexible mode of adaptation that ever developed in the New World. Based on a pattern of regional specialization, it was the most persistent of all the known technological stages in North America.”

During the Archaic period, Indian people in the Great Basin foraged across fairly large territories to obtain food and other resources, such as stone for making tools. They travelled widely, but not randomly. Alan Schroedl writes:

“This lifeway was centered around a pattern of seasonal wandering, the hunting of animals, and the gathering of plants.”

For the people to survive in this harsh climate, they had to know where resources—plants, animals, stones—are located and when it was best to harvest them. Seasonal migrations enabled the people to take advantage of the diverse resources over a large area. Archaeologists find Archaic sites in many different environmental settings. These settings included lake areas as well as woodland areas.

During the Archaic, the climate was changing. This meant that the Native cultures had to respond to these changes which often meant a shift in seasonal migration patterns as well as a change in the resources used. In his report on prehistoric environments in the Handbook of North American Indians, Peter Mehringer writes:

“Although ecological shifts lasting millennia are clearly illustrated, it seems that Great Basin inhabitants reacted to variations resulting from sharp, punctuated events measured in decades or at most a few centuries.”

In an entry in The Oxford Companion to Archaeology, archaeologist Charlotte Beck reports:

“Although most populations at this time were highly mobile hunter-gatherers, each focused on the suite of resources available to them locally; thus with the passage of time there is also a pattern of increasing regional generalization.”

With regard to resources, Joel Janetski, in an article in Utah Historical Quarterly, reports:

“Particularly important were small seeds and nuts (grass seeds, pickleweed, bulrush, etc.) and both large and small animals (mountain sheep, deer, antelope, rabbits, ground squirrels, and others). Seeds were collected in tremendous numbers using baskets of various kinds and were processed into flour with milling stones.”

In his book Comb Ridge and its People: The Ethnohistory of a Rock, Robert McPherson writes:

“The Archaic people appear to have been all business, preoccupied with survival, capturing and consuming everything edible from lizards to prickly pears to mice to grasses to bighorn sheep.”

“Milling implements (simply basin metates and one-hand cobble manos) became an important addition and could grind everything from rodents to grasshoppers to grass seed.”

Some of the plant foods being used by the Archaic people included seeds from pickleweed, prickly pear, sand dropseed, marshelder, sunflower, and goosefoot. Plants provided not only food, but also fiber which was woven into mats, sandals, and clothing.

The Archaic people were also hunting big game animals including deer, pronghorn antelope, mountain sheep, elk, and buffalo. They were trapping small game, such as rabbit, with netting.

Kennewick Man (The Ancient One)

Some Artifacts from the Columbia Plateau (Photo Diary)