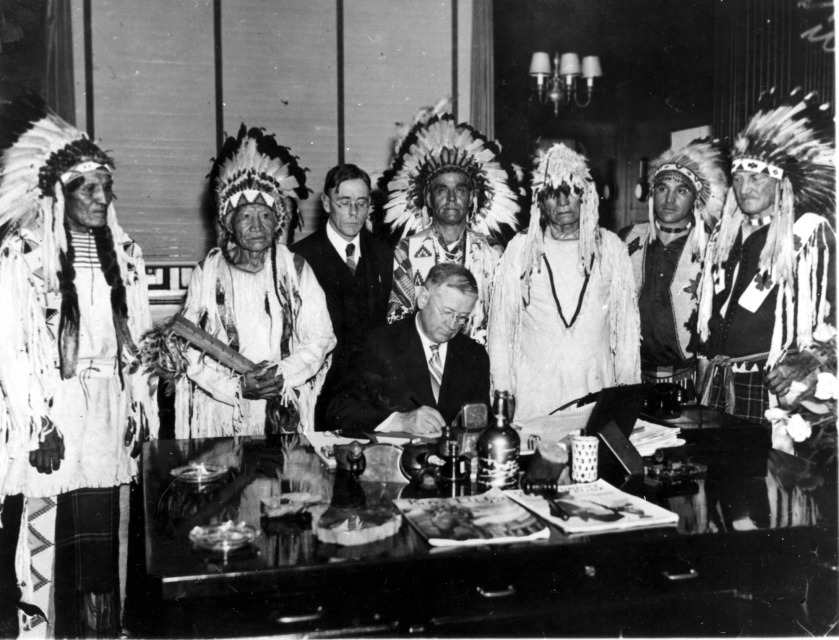 Guided by the Constitution, the United States initially viewed Indian tribes as sovereign nations and thus negotiated treaties with them. By the 1880s, however, American greed and lust for land outweighed any concerns for the Constitution and law. American policy changed and sovereign Indian nations were viewed as impediments to the “civilization” of Indians and a barrier to relieving Indians of their aboriginal homelands. Indians were now seen as immigrants who should assimilate just as other immigrants had assimilated. By the 1920s, it was evident to most people that American Indian policy had created massive poverty. With the election of Franklin Roosevelt and the implementation of the New Deal, American Indian policy changed radically.

American Indian policy has generally been established on the basis of stereotypes, racism, greed, and a Christian worldview. Actual data about Indians and input from them has rarely been considered. In a major shift, a scientific study of American Indians was authorized by the Department of the Interior in 1926. Lewis Meriam led the study for the Institute for Government Research, a privately endowed foundation.

In 1928, the Meriam Report – The Problem of Indian Administration –was completed. The study contained data on health, education, economic development, social life, and government programs. Historian Kathleen Chamberlain, in her book Under Sacred Ground: A History of Navajo Oil 1922-1982, writes:

“The Meriam Report captured the attention of government officials with graphic descriptions of poverty, disease, inadequate diet, and substandard housing.”

The Meriam report provided a number of recommendations regarding American Indian policies based on the study’s scientific findings. With regard to economic development, the report finds the government’s efforts in this area to be lacking:

“The most fundamental defect has been a lack of vision and of definite objectives, a failure to see that the economic advancement of the Indians requires a definite program.”

One of the recommendations was that a corporate form of organization be used in administering and developing tribal lands and resources. The report recommended that tribes be incorporated and that the tribal councils be given some decision-making powers.

In 1933, the newly elected administration of Franklin Roosevelt brought major changes to Indian Affairs. John Collier was appointed Commissioner of Indian Affairs. Unlike other Commissioners, Collier wanted to encourage Indian cultures and so he requested assistance from anthropologists instead of missionaries. Historian Angie Debo, in her classic 1940 book And Still the Waters Run: The Betrayal of the Five Civilized Tribes, writes:

“Collier was the first Commissioner who ever approached his problem from the sociological and scientific point of view; and he believed in the encouragement of native arts, the protection of Indian religion and tradition, and the preservation of all group relationships. He regarded the extinction of the tribal governments and the forcible breaking up of the communal holdings as a crime against the spirit of a people, and a gigantic economic blunder that had reduced the Indians to poverty.”

In Congress, legislation was introduced based on some of the recommendations of the Meriam Report. In spite of strenuous objections by Christian missionary groups, Congress passed the Indian Reorganization Act (IRA, also known as the Wheeler-Howard Act) in 1934. The IRA had three objectives: (1) economic development of the tribes, (2) organization of tribal governments, and (3) Indian civil and cultural rights. According to Sven Liljeblad, in an article in Idaho Yesterdays:

“Perhaps the most important provision made by the Indian Reorganization Act was that of granting the tribes the right to adopt their own constitutions and thereby organize themselves into self-governing units under federal guardianship and to incorporate for business purposes.”

Those tribes who voted to reorganize under the IRA were able to adopt their own constitutions and to organize themselves into self-governing entities under federal guardianship. They were also able to incorporate for business purposes. There were, however, a couple of problems with this. First, the federal government viewed the concept of “tribe” and “reservation” as being synonymous. This ignored the fact that there were many reservations which contained more than one tribe and that the tribes on a single reservation often had totally different cultures and histories. Once again, the federal government policies seemed to view all Indians as the same and to ignore the reality of tribal differences. As a result, a number of confederated tribal councils were formed.

Noting that the concept of the “tribe” implied in the IRA was not traditional, E. A. Schwartz, in his book The Rogue River Indian War and Its Aftermath, 1850-1980, reports:

“The Siletz peoples, among others, had never had a tradition of tribal ownership because their basic unit of government among their ancestors was the village, not the tribe, a concept that would have had little meaning for them.”

The second problem was that the tribes were not truly free to govern themselves. All actions of the tribal council were subject to review and approval by the Secretary of the Interior. Anthropologist Richard Perry, in his book From Time Immemorial: Indigenous Peoples and State Systems, notes that tribal council meetings had to include the reservation superintendent:

“As representative of the Department of the Interior, the superintendent retained powers to veto major decisions of the council. The superintendent also acted as custodian of tribal records. Clearly, the IRA recognition of reservation autonomy did not extend very far in matters of self-governance.”

The tribal governments formed under the IRA were not based on traditional Native governments, but on constitutions which were based on the U.S. Constitution. In most cases, the Indian Office supplied the tribes with a boiler-plate constitution which could be modified for their specific tribe(s).

One of the consequences of the IRA was to impose a race-based notion of Indians upon the tribes. Beginning with the Dawes Act, the American government had sought to institute the concept of blood quantum—a racist notion stemming from discredited ideas of racial purity—in determining who was to be considered Indian and who was not. Anthropologists Gregory Campbell and Neyooxet Greymorning, in their chapter in American Indian Nations: Yesterday, Today, and Tomorrow, write:

“Most IRA constitutions simply aped the prevailing federal quantum standard, advancing racial standards as the linchpin of ethnic and national identity. Since then, a majority of Indians have been indoctrinated into assessing each other in terms of blood quantum.”

“We feel that the best interests of the Indians can be preserved by the continuance of treaty laws and carried out in conformity with the treaty of 1855 entered into by the fathers of some of the undersigned chiefs and Governor Stevens of the territory of Washington.”

The largest tribe to reject reorganization was the Navajo. Many of the Navajo were disturbed by a stock reduction program promoted by Commissioner of Indian Affairs John Collier which was intended to reduce overgrazing by limiting tribal herds. Many Navajos felt that a vote for the IRA was a vote for John Collier and thus a vote for stock reduction. Since Navajo sheep had great cultural value, they were reluctant to support a program which seemed to attack their core values.

Under the IRA, tribes could create a federally chartered corporation which could borrow money, enter into contracts, and sue. The federal government envisioned the corporation as the primary vehicle for economic development on the reservations. Unlike other corporations, however, the tribal corporations were hampered by government micromanagement of their development proposals.

The Blackfeet in Montana were one of the first tribes to reorganize under the IRA. They embraced the IRA because it gave them access to credit and they felt it would reduce or eliminate federal control of the tribe’s financial and natural resources. By 1938 the Blackfeet had nearly $160,000 on deposit in the Treasury Department. None of this money was from the federal government but was money that had been generated by tribal leases. A tribal delegation travelled to Washington, D.C. to obtain $125,000 of these funds for a program of industrial assistance. The Indian Office felt that the Blackfeet had a workable plan, but Congress granted the tribe the funds in reimbursable form. In other words, the tribe was allowed to borrow its own money, but it was not allowed to have it. It was clear that tribal corporations were not the same as other corporations.

While the IRA was an attempt to change directions and imple­ment an Indian “new deal”, there are some who feel that the IRA is a failure. Cahuilla historian Rupert Costo, in his chapter in Indian Self-Rule: First-Hand Accounts of Indian-White Relations from Roosevelt to Reagan, writes:

“The IRA was the last great drive to assimilate the American Indian. It was also a program to colonialize the Indian tribes.”

There was considerable opposition to the new direction of Indian policy. According to historian Harry Kersey, in his book An Assumption of Sovereignty: Social and Political Transformation Among the Florida Seminoles 1953-1979:

“Their opposition was rooted primarily in the nineteenth-century Christian reform imperative, which held that Indians should be converted from their heathen ways to save their souls and made individually responsible for achieving social and economic success or failure in American society.”

In his book In the Hands of the Great Spirit: The 20,000-Year History of American Indians, Jake Page describes the opposition this way:

“The Red-baiters—more noisy than numerous—also objected to Collier’s policy of encouraging Indian languages, tribal arts and crafts, and Indian religious ceremonies, and on this latter issue they were sometimes joined by Christian groups that continued to see Indian ceremonies as nearly satanic rites.”

In less than three years, there were numerous calls to repeal the IRA and to return to the policies of enforced assimilation. Many Christian religious leaders testified that the new policy was atheistic and communistic in that it allowed Indians to practice their own religions and it allowed for Indians to have communal ownership of land.

The goal of the IRA was to give Indian tribes control over their own resources. According to anthropologist Deward Walker, in his book Conflict and Schism in Nez Perce Acculturation: A Study of Religion and Politics:

“Since resources were badly eroded, and Indian leaders lacked both business experience and ‘capitalistic instincts’, this policy was also generally a failure, even though it incorporated the best social science of its day.”

Even with its limitations, the IRA marked the beginning of a new era for Indian tribes. Once again, tribes were seen as sovereign with a right to self-government, even though that self-government was limited by a paternalistic federal system.