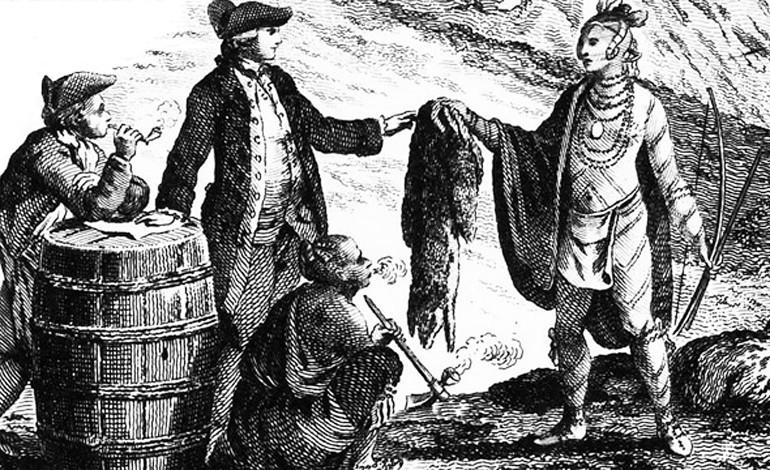 When the French first entered North America, their primary focus was on gaining wealth through the fur trade. They viewed Indians as trading partners, as important elements in acquiring the furs which would generate great wealth. Following the system of rivers and lakes, French traders using Indian canoes penetrated deep into North America. To be successful, the French traders learned Indian languages, often dressed in Indian style, and married Indian women.

The fur trade in the seventeenth century was globalized: that is, furs obtained from the Indians in North America were transported to Europe where they were sold for a profit. To obtain the furs, the traders imported European manufactured goods which the Indians wanted.

Over the centuries, the primary engine of globalization has been the transnational corporation. In 1602, the Company of New France, a joint stock company modeled after the English and Dutch companies trading in the East Indies, was given a royal charter and exclusive trading rights from Florida to the Arctic Circle and westward along all rivers flowing into the “Fresh Sea” (the Great Lakes).

The French trading strategy was to travel inland, using Indian canoes to follow the lakes and rivers to the Indian villages. The French wanted to establish firm, long-lasting trading alliances and so they spoke the Native languages. They also recognized that there were traditional ceremonial preludes to trading and they were willing to participate in them.

The French traders usually lived in the Indian villages, so they also dressed in an Indian fashion: they got rid of their cumbersome European dress and wore Native-style hunting shirts and moccasins. They recognized the importance of family relationships in trading networks, so they often married Indian women and were adopted into Indian families.

The marriages between the French traders and Indian women often resulted in children. These children, who were not seen as racially mixed as race was not a Native concept, eventually helped create a new people, the Métis. The Métis are a cultural mixture of European and Indian traits.

The general peace negotiated between the Iroquois and the French was broken in 1627 by the Montagnais, who were French trading partners. The Montagnais attacked the Iroquois and obtained several prisoners. The French persuaded the Montagnais to release the prisoners and sent a party to seek pardon from the Iroquois for breaking the peace. The peace party, however, was captured, tortured, and killed. For the next century, the French dealt with peace agreements which were often shattered by their trading partners. The ensuing war, battles, and skirmishes interfered with trading relations.

In 1632, the French established Trois-Rivières, Québec, as a major center for building Indian birchbark canoes for the fur trade. Canoe sizes became standardized: the Montreal canoe was 36 feet long; the North canoe was 26 feet long; and the Bastard canoe was 28-32 feet long. The Montreal canoe, which was most frequently used on the routes from Montreal to the western end of Lake Superior and on the route to Michilimacinac and down the Mississippi, could carry 8,000 pounds of cargo plus the paddlers.

Overall, the French managed to integrate two very different economic philosophies. European economics was focused on material goods and was guided by a philosophy that emphasized the individual accumulation of goods. French society was stratified, that is, it was divided into social classes. On the other hand, Indian societies were egalitarian. Philosophically, the Indians frowned on the accumulation of individual wealth. Those who acquired wealth, gave it away, and in this way gained social prestige.

Many of the European trade goods which the French traders brought to the Indians-beads, mirrors, bells, and caps-were valued by the Indians for aesthetic, decorative, and/or spiritual reasons. Some of the metal items, such as axes, knives, arrow heads, pots and pans, and awls, were incorporated into Indian cultures as substitutes for similar non-metal goods. While iron arrowheads were popular, guns and ammunition allowed the tribes to expand militarily. Guns, along with the gunpowder and the lead balls that they required, were in great demand among the Indians and were often a prestige item within the Indian nations.

Most of the Indian nations with which the French had trading alliances were agricultural. In these cultures, such as that of the Huron, the women did the farming while the men hunted. With the fur trade, men’s economic importance increased as they now hunted not just for calories, but for trade goods. As their hunting ranges increased, this brought them into more conflicts with other tribes.