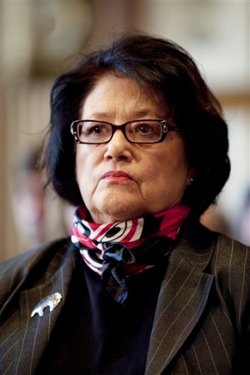 Elouise Cobell, one of the most important Native American leaders in recent decades, has died.

There’s lots of people who have offered up eulogies and tributes, including President Obama.  Several of those are excerpted to close this diary.

Elouise Cobell was a force, including working to launch the first-ever Indian-owned bank.

Mrs. Cobell, an accountant who grew up on a reservation in Montana without electricity, a telephone or running water, was all too familiar with stories of the government’s mistreatment of tribes. She said the federal mismanagement of the land trusts dated back to the 19th century and had contributed to a pattern that had left her tribe with high poverty and unemployment rates.   (WaPo)

But this is what she’ll be remembered for: She was the lead plaintiff in a class action suit to compel the federal government to account for monies they’d taken in on behalf on Native Americans for lease of their lands (for farming, grazing, mining, drilling, logging and other mostly extractive activities.)

Cobell approached the Boulder, Colo.-based Native American Rights Fund about filing a class-action lawsuit against the Interior and Treasury departments, and she was named as lead plaintiff when the suit was filed in 1996. The suit contended that the Dawes Act arrangement allowed U.S. officials to systematically steal and squander royalties intended for Native Americans.

“It’s just such a wrong that if I didn’t do something about it I’m as criminal as the government,” Cobell told the Associated Press in 1999.  (LA Times)

The failure of fiduciary responsibility as trustee dated back to the passage of the Indian Allotment Act in 1887.  She filed the suit in 1996, which was supported in part by a genuis grant she received from the MacArthur Foundation.  The Cobell case, as it came to be known, was the largest class action suit against the U.S. government in history.

Investigations showed that the Interior Department’s Bureau of Indian Affairs, which managed the allotments and the revenue accounts, paid the Indian landowners erratically, if at all. For decades, some Indians were sent checks for as little as 8 cents.

Cobell estimated the unaccounted monies at over $150 billion.  That’s right, billion – with a B.  Payments were made, so it wasn’t 100% ripoff.  During the Bush years, John McCain chaired the Senate Indian Affairs Committee, and suggested that maybe $25 million might be a suitable settlement figure.  It took the Obama Administration coming into office to settle the thing, because the Republicans flat-out weren’t going to do it.  The plaintiffs were right to scoff at McCain’s paltry offer.  In the end, the suit was settled in early in 2010 for $3.4 billion.

Judge Royce C. Lambert, who was appointed to the federal bench by Ronald Reagan, got so disgusted with the Interior Department’s obfuscation and obstruction, he awarded the plaintiffs $7 million for legal costs back in 2006.  The Bush Interior Dept. under Gale Norton (more recently general counsel for Shell Oil) found the money by taking it away from other tribes’ regular appropriations.  From an Interior Dept. letter (pdf) on January 26, 2006:

As this interim fee award was not a planned expense, the Department considered a range of options to comply with the Court’s Order for prompt payment which was sent to plaintiff’s counsel on January 18, 2006.  We utilized several sources of funds to pay the fee award [of $7,066,471.05.] … [T]hese funds are no longer available thus associated program activities will not be undertaken.  Please ensure that care is taken to understand whether these financial changes affect your planned program activities.

In other words, divide and conquer.  We’re going to maybe shut down your Senior Center or make you fire a tribal police officer or two to pay for this thing.  (Subtext: You should blame Cobell.)

Despite growing evidence of wrongdoing, three American administrations fought the case all the way, at first dismissing her challenge as unworthy of consideration. When it became clear that their adversary would not give up, bureaucrats destroyed evidence and took retaliatory measures against Indians. Eventually, after 14 years; 3,600 court filings; 220 days of trial; 80 published court decisions and 10 appeals, Elouise Cobell’s campaign ended in victory in 2009.   (Telegraph, UK)

Rather than responding to Lamberth’s increasing frustration, and complying with his orders from the bench, Bush’s DoI successfully moved to have him removed from the case.  He didn’t start out biased against Interior, but time and experience changed his mind.

[Lamberth] described the Interior Department in a 2005 court decision as a “dinosaur – the morally and culturally oblivious hand-me-down of a disgracefully racist and imperialist government that should have been buried a century ago, the last pathetic outpost of the indifference and anglocentrism we thought we had left behind.”

The thing dragged on, for well over a decade.  Elouise Cobell died of cancer, lived long enough to see success in the cause she devoted herself to.  Well, mostly so.  The House and the Senate passed the settlement in 2009, which President Obama signed.  But it was still tied up in court for another 2 years.

in June this year a federal judge approved the settlement, which became the largest payment the U.S. government ever made to Native Americans.

I could go on about her, but I think readers will be better served if I quote what others have said about her instead.

Indian Country just lost one its greatest female warriors. … Like many great leaders in history, she has earned fame for a basic reason. She put herself last as she pursued justice first on behalf of other people.

The Blackfeet Nation and all of Montana have lost a true inspiration and hero.

Elouise Cobell represented the indelible will and strength of Indian Country and her influence and energy will be greatly missed. Her passing on from this world must be honored by reaffirming our resolute commitment as Indigenous peoples to protect the rights of our citizens and our sovereign nations.

Asked by the New York Times what she wanted her legacy to be, she said she hoped she would inspire a new generation of Native Americans to fight for the rights of others and lift their community out of poverty.

“Maybe one of these days, they won’t even think about me. They’ll just keep going and say, ‘This is because I did it,”‘ Cobell said. “I never started this case with any intentions of being a hero. I just wanted this case to give justice to people that didn’t have it.”

Elouise Cobell was soft-spoken, but her politeness and sense of propriety took nothing away from her tenacity. Ms. Cobell, who died on Sunday at the age of 65, was a cattle rancher, a member of the Blackfeet Tribe and a determined advocate for nearly forgotten rights of American Indians.

Elouise Cobell was able to see in a past that Washington forgot a way to begin to rebalance relations between American Indians and the federal government. She restored the past to memory, spoke eloquently on its behalf and so made a different future possible.

Elouise Cobell was a star — truly a guiding light that will always lead the way for all Americans who fight for justice and fairness.

I am deeply saddened by the loss of Elouise Cobell, who dedicated her life to the betterment of Indian people. She sought justice to address historical wrongs that had weighed on our nation’s conscience and was a significant force for change. let us be inspired to do better by the first Americans, and to uphold our nation’s promise of justice and opportunity for all.

Elouise Cobell never stopped fighting for the rights of Native Americans, no matter the roadblocks or red tape that was put in her path. When I met with her last year, she showed the kind of persistence and determination that allowed her to keep fighting for the rights of Indian Country for more than a decade. Our nation has lost a true fighter, and my condolences are with her friends and family during this difficult time.

Elouise was an extraordinary American who made countless contributions to our country, which is why I believe she deserves the highest honor Congress can bestow upon a civilian. Indian Country – and the entire country – has lost an inspiring leader.

Eloise Cobell was a warrior for justice, a voice for the voiceless, and a dear friend. Our state and our country are better for having known her.

Even Republican Rep. Denny Rehberg (who will make us look back on Jon Tester with misty-eyed nostalgia, should his bid for the Senate succeed) felt the need to weigh in:

Like anyone who had the honor to work side by side with Elouise in the pursuit of justice, I will never forget her determination to do the right thing.  Her efforts are an inspiration for generations of Montanans to come.

Indian Country, as well as the entire nation, has lost a champion of human rights.  Elouise Cobell battled to make our country acknowledge historical wrongdoing, and she spoke truth to power so that justice could prevail.

She will be remembered for her joyous laughter, her hard fought settlement and her determination to improve the lives of her community.

There’s plenty to admire about and to learn from Cobell’s life and work – which, it’s important to note, was full of accomplishments beyond the high-profile lawsuit. Aside from being the classic underdog story of an individual standing up for what she believed in against the government, and persevering for years in the face of foot-dragging and innumerable court actions, Cobell was a shining example of trying to improve the lives of those around her.

Those who know and love Elouise Cobell can console themselves knowing that she left the world a better place than what she found.  That’s a life well-lived, and well worth remembering for a long, long time.