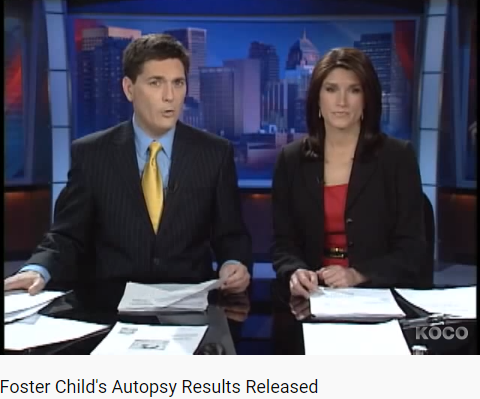 Naomi Whitecrow, a 2-year-old member of the Cheyenne and Arapaho Tribes “died of blunt-force injury to the head, abdomen and extremities.”

An Indiana pathologist ruled the child died of blunt-force injury to the head, abdomen and extremities. A Texas expert testified neurological problems such as a seizure could have led to her death.

Amy Holder, who was her foster mother, only has to pay a fine. No jail time.

Jurors had recommended no prison time and that she pay a $5,000 fine. The district attorney had hoped for a stiffer punishment.

“It’s still legal in Oklahoma to kill an Indian.”

Despite being found guilty of child abuse, the jury recommended a $5,000 fine for Holder. Tribal members say she deserves 25 to 35 years in prison.

Naomi had trouble walking, would fall 20 to 30 times a day, repeatedly tried to gobble food whole and would grab stuff from the trash and attempt to eat it, Holder told investigators.