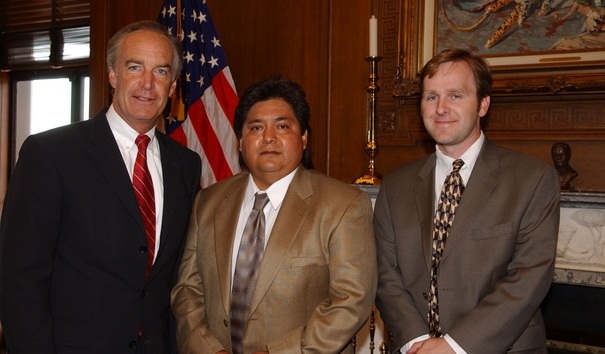 First off, I’m a HUGE fan of the NYTimes.  I think the decline of the newspaper is a terrible thing.  I’m a big time news junkie.  I’ve been reading the Times everyday for the last eight years.  But I’m also a Native American attorney who has studied Critical Race Theory and am highly sensitive to images of cultural stereotypes.  Imagine my reaction as I came to work early to read the papers and saw the image below before I went to DC District Court this morning for a hearing on Nez Perce v. Kempthorne.

The image was “above the fold” so to speak on the home page of “the most liberal” newspaper in America.

First off, the fringed dresses.  I’m not going to comment on the ethnicity of the females, I don’t know and don’t want to know.  The issue is one of sexualization of “the Indian Princess.”  Don’t believe me?  Check out Disney’s Pocahontas and look again.

Legendary Beauty?  WTF is that about?  I refer again to University of Arizona Law and Critical Race Professsor Robert Williams lectures on stereotypes and American Indigenous people entitled “Savage as a Wolf”  available at arizonanativenet.com.

So back to the NYTimes picture.  Look at the full size image and tell me who you see in the background.

Men dressed as US Cavalry?!

I’m not even going to complain that the bar is charging $3 a CAN for Bud Light(my feelings on the sale to InBev are well cateloged by my comments).

The kicker came as I read the article on “Absaroka” but the final insult came in paragraph 12.  “Mr. Simpson said Absarokians mostly wanted self-determination.”

Native Americans have fought for self determination and the right to self govern ever since the arrival of the White Man…Columbus’s big mistake…the beginning of the American genocide.  We’ve been through the Termination period, Allotment, and Restoration.  We’re still fighting for self government and recognition for tribes.  The Churucawa Apache are still an unrecognized tribe because they never STOPPED fighting!

(ASIDE:  I just watched Chato’s Land on Comcast on Demand, a western with Bronson and Jack Palance which gives the painfully delivered message of the White Man as Savage…worth the 2 hours.)

Off to the DC Circuit for a hearing on Nez Perce v. Kempthorne where more irony awaits.

It’s a hearing on Class Certification regarding Individual Indian Trust Accounts, where it has been well cited by the Cobell litigation that the US Government has managed to lose, not record, be held in contempt for failing to provide an accounting and living up to their duties of trustee in the cases of managing Tribal Trust corpus/property and mismanaging those funds.

The obstacle to today’s certification of various tribes similar claims under one class?  Cited by the governement:  Tribal Sovereign Immunity.

The irony would lose more in the explanation than it’s worth.