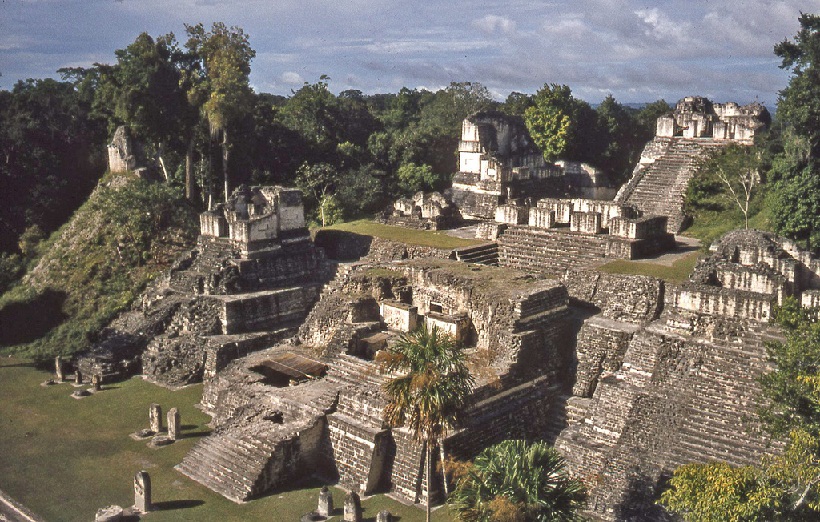 About 350 CE, the Maya city of El Zotz was founded in what is now Guatemala. The Maya name for the city is Pa’Chan which is translated as “Split Sky” or as “Citadel Sky.” The designation “El Zotz” comes from the many bats living in the caves on the site: zotz is the Maya term for bats.

El Zotz is located about 20 miles (12 kilometers) from the major Maya center of Tikal and about 16 miles (26 kilometers) from Uaxactun. The emblem glyph for El Zotz associates it with the Maya city of Yaxchilan in Chiapas, Mexico and may indicate that the Yaxchilan royal dynasty originated in El Zotz.

The hieroglyphic texts associated with El Zotz suggest that the site was founded by the enemies of Tikal who wanted to exploit a period of weakness in this important Maya city. El Zotz was strategically located between two rival Maya kingdoms: Tikal and the alliance of El Perú and Calakmul. There is a possibility that El Zotz was established as an outpost for the El Perú/Calakmul alliance.

There are two major ceremonial sites at El Zotz: one at the central core of the city and one on the western edge. The western ceremonial center has been designated as El Diablo (The Devil). The pyramid at El Diablo rises 623 feet (160 meters) above the valley floor. The solid platform base of the pyramid is 76 feet by 85 feet (23 meters by 26 meters) and above this are two or three narrower terraces with a temple on top. The sides of the pyramid are very steep. When the site was occupied by the Maya, this pyramid, painted a saturated red, would have announced the presence of an important center. During the rising and setting sun, a time when the painted pyramid was brightest, it would have been visible for about 15 miles.

Archaeological excavations at El Diablo carried out in 2008 revealed stucco masks along the façade of the structure representing the various guises of the Maya sun god. The façade identified the structure as the Temple of the Night Sun. The shape of the building and its polychrome decoration are similar to the Rosalila Temple of Copán.

A smaller building stands in from of the great temple. When archaeologists sank a test pit into the floor of the chamber of this building, they uncovered blood-red ceramic bowls which were filled with small packets of fingers and teeth. In one bowl the archaeologists found the remains of a partially burned baby. When archaeologists probed the floor of the chamber, they found a sealed chamber beneath the floor. Because this chamber had been sealed so tightly that air and water could not enter, the organic materials-wood, painted stucco, cord, textiles-within it had been well preserved.

The sealed chamber proved to be a royal tomb measuring about 12 feet (4 meters) by 4 feet (1.2 meters) by 6 feet (2 meters) high. In addition to the remains of an adult male, the tomb was filled with ceramics, textiles, and other ritual offerings. Also found in the tomb were the remains of six children (four of whom were infants) who appeared to have been killed in a ritual sacrifice and then placed as offerings in the tomb.

Human remains provide archaeologists with important clues about life in the past. The bones of the man in the tomb show that he was in his 50s when he died. His joints were arthritic and probably caused him some pain. Jewels had been embedded in his teeth, a sign of high rank.

For burial, the body had been dressed in the costume of a ritual dancer. This included an elaborate headdress (placed by his head) and small bells of shell with dog canine clappers which had been arranged around his waist and legs. Interpreting the symbolism of burial clothing is always problematic for archaeologists. On one hand, the costume could be an indication that he had been a ritual dancer in life. On the other hand, the costume could have been intended to help him in the next life and not be related to his past life.

The man was also laid out with an obsidian blade in his hand. While this may have been a sacrificial knife, analysis of the traces of red on the blade ruled out blood. This suggests that it may not have been actually used in sacrifices. A mirror buried with him may provide some additional clues about him: the glyphs on the back of the mirror can be translated as either “Red [missing] Turtle” or as “Great [missing] Turtle.”

So who was this man? The elaborate burial goods and the jeweled teeth suggest that he had a high rank. The proximity of his tomb to the Temple of the Night Sun, however, have led archaeologist to hypothesize that he was the founding ruler of El Zotz. They also suggest that the Temple of the Night Sun had been constructed to venerate this dead ruler. Once the burial rituals had been completed, the tomb had been sealed, a platform constructed above it, and a roofed sanctuary over it. Archaeologists found traces of burning in the sanctuary suggesting that rituals had been frequently performed at this site. A doorway through the sanctuary leads to the Temple of the Night Sun which may have been built to venerate the founding ruler. The El Diablo Pyramid was later built over the top of the temple.

Archaeologists found a frieze that wrapped around the structure. About 14 masks are included in the frieze. These masks depict a number of celestial entities including the sun. For the Maya these masks were living beings.

The Maya sun god, K’inich Ajaw, has been identified in three of the masks. Each of these masks represents the sun god at a different time of day. They are placed along the frieze relative to the time of day when the sun would have illuminated them. In the morning, the rising sun is associated with the Caribbean waters to the east. At about noon, the sun would illuminate a fearsome, blood-drinking creature and then in the evening a jaguar. In general the images in the frieze seem to represent the sun’s passage through the sky.

With regard to the importance of the stuccos, archaeologist Stephen Houston says:

“The stuccos provide unprecedented insight into how the Maya conceived of the heavens, how they thought of the sun, and how the sun itself would have been grafted onto the identity of kings and the dynasties that would follow them.”

El Zotz continued to exist for only a few generations after the death of its founding ruler.