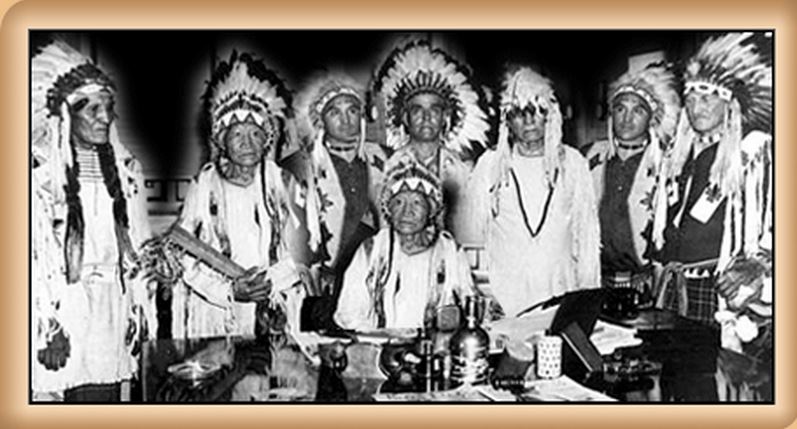 When the Europeans arrived in North America, they simply assumed that their concept of family was universal, moral, natural, and divinely-inspired. If there were any other kinds of families they must be immoral and inferior. For the Europeans, family implied a male-dominated institution, one run by the male in the household and whose children belonged to him. When Europeans encountered the Cherokee family, they: (a) were simply oblivious to the differences and superimposed their own concepts on it; (b) were totally baffled by the differences; and/or (c) assumed that the Cherokee family was immoral and unnatural.

At the time of European contact, the Cherokee were divided into three broad groups: (1) the Lower Towns along the rivers in South Carolina, (2) the Upper or Overhill Towns in eastern Tennessee and northwestern North Carolina, (3) the Middle Towns which included the Valley Towns in southwestern North Carolina and northeastern Georgia and the Out Towns. There were some cultural and linguistic differences between these groups. The Cherokee language is a part of the Iroquoian language family.

Understanding the Cherokee family begins with an understanding of Cherokee clans. First of all, clans are not just a bunch of people who are somehow vaguely related to each other. Clans are corporate entities with names, traditions, oral history, and membership rules. Traditionally, the Cherokee were a farming people and the fields were farmed by the clans. The land was owned by the village and allocated to the clans.

Membership in a Cherokee clan is determined by the mother: you belong to your mother’s clan. Among the Cherokee, as with many other American Indian tribes, clan membership is the most important thing a person has and was the most fundamental of Cherokee rights. To be without a clan is to be without identity as a Cherokee.

The Cherokee had seven clans:

Long Hair: (A ni gi lo hi) The Peace Chief was usually from this clan

Paint: (A ni wo di) Many of the medicine people were from this clan

Wolf: (A ni wa yah) Many war chiefs came from this clan

Premarital chastity was unusual and there were no cultural prohibitions against fornication or adultery. Cherokee women determined with whom they would have sexual relations. Cherokee marriage was not seen as binding on either the husband or wife. Married Cherokee women also enjoyed great latitude with regard to sexual freedom. Women were free to dissolve a marriage at will.

Cherokee women resided with their kinswomen, that is, with members of their own clan. They owned the homes and shared in the agricultural products of the clan’s fields.

Cherokee men often married women from outside of their own village. The men were expected to live in their wives’ village. Women, of course, owned the house.

The Cherokee wedding ceremony was brief and simple: it involved an exchange of gifts. It was not a religious ceremony and often involved only the two clans involved.

The traditional roles of uncles-more specifically, the mother’s brothers-were very important in traditional Cherokee culture. Traditional Cherokee education was based on the role of the maternal uncles. For a young boy, this meant that the most important men in his childhood were his uncles, not his father. It was his maternal uncle who would teach him about warfare and hunting. The uncle was the disciplinary and tutorial authority within the clan.

The designation “maternal uncle” was also different in Cherokee society than in European society. This simply indicated that the man was a member of the mother’s clan. The maternal uncle did not have to have the same mother as the mother.