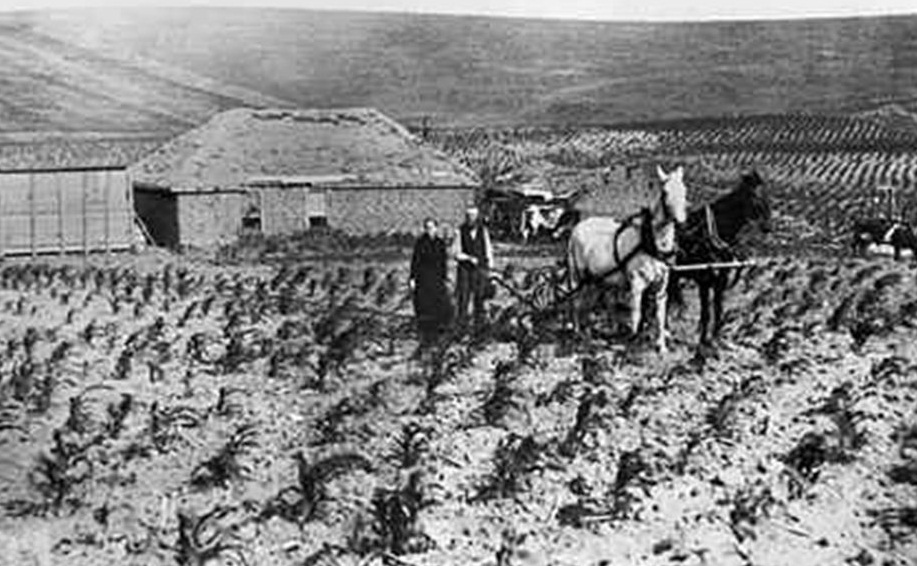 The Kiowa speak a language which linguists classify as a part of the Tanoan language family and is related to the Pueblos of Taos, Jemez, Isleta, and San Ildefonso in New Mexico. Yet the oral traditions of several tribes place the homeland of the Kiowa not in New Mexico, but much farther north in what is now Montana. It was here that they made the transition from elk and deer hunting to buffalo hunting. It was on the plains of Montana that they acquired the horse and many elements of Northern Plains culture, including the Sun Dance. In was in the north that the Kiowa made close and lasting friendships with the Sarsi, the Crow, and the Arikara. It was here that they first encountered the Plains Apache (also known as the Kiowa-Apache).

Kiowa oral tradition tells of a time when they lived far to the north, beyond the territory of the Crow and the Lakota in the Northern Plains. It was a country that was very cold most of the year. This was a time when they used dogs to carry their burdens as they did not know of the horse. One of their warriors went far to the south where he was captured by the Comanche. The Comanche treated him well and gave him a horse so that he might return home with honor. Upon returning home, he told the tribe of a land stocked with game where the summer lasted nearly all of the year. The council decided to follow the man back to the country he had seen and the following spring they began their migration south. They traveled south until they were attacked by the Comanche.

The Kiowa maintained a tribal history or chronology which was painted on hides and later on paper. The chronology was arranged in a continuous spiral starting in the lower right and ending near the center. Winter was symbolized by a black bar and summer by a drawing of the Sun Dance lodge. In this way, the Kiowa kept a fairly accurate account of their history.

The Kiowa would form fairly large winter camps which were located along streams where there was firewood and shelter from the winter storms. In early spring, when food supplies were low, the camp would break up into several smaller bands which would scatter in search of game. Later in the summer, the bands would come back together for the buffalo hunt.

Kiowa men wore buffalo robes to cover the upper part of the body. The tanned side of these robes was often painted in a sunburst design. Women’s dresses would be decorated with a simple beaded band across the shoulders.

Among the Kiowa, the basic social unit was composed of a group of brothers, their wives and children. These kinship groups were then loosely organized into a variable number of bands under the leadership of a chief or headman who was spoken of as “father”. Bands ranged in size from about 20 individuals to over 60, with the typical band having about 35 people.

People were attracted to a Kiowa band because of the generosity of the chief. Chiefs who were not generous and who failed to maintain internal peace soon found themselves without a band. The primary functions of the chief involved the directing of the band’s hunting activities and the maintenance of internal peace. The chief usually decided when and where to move.

The Kiowa tribe existed as a sense of common identity and in reality the tribe came together only once a year (sometimes less) for the Sun Dance. In Kiowa tradition there were seven autonomous tribal divisions, each composed of several bands: Biters, Elks, Kiowa proper, Big Shields, Thieves, Pulling Up, and Black Boys. During the annual encampment these divisions occupied set places in the camp circle. Each of these divisions had a head chief who was selected on the basis of ability (the position was not inherited) and there was a nominal chief for the entire tribe.

Warfare was an important part of Kiowa culture, particularly during the nineteenth century. This importance was expressed through ceremonial song and dance. There were two kinds of raids: (1) horse raids, and (2) revenge raids. The typical size of a horse raiding party was 6-10 warriors while the revenge raiding parties were much larger. The smaller horse raiding parties might stay out for a long time – some were gone for a year or two – while the revenge parties soon returned to the band to help with hunting and other activities.

The Kiowa recognized about twelve different deeds of valor during war. When a man had performed four of these deeds he was acknowledged as a warrior.

Among the Kiowa there were several warrior societies:

Horses’ Headdresses: this was the lowest in rank and tended to have younger members.

Black Legs: membership in this society required the achievement of war honors.

Skunkberry People: this is the oldest of the men’s societies and during the twentieth century it became known as the Gourd Dance Society. The society demanded brave conduct from its members in warfare.

Principal Dogs: this was the most exclusive of the men’s societies and membership was open only to the highest ranking war chiefs. Members had to have obtained at least four war honors.

These societies functioned primarily during the four weeks of the Sun Dance encampment. During this time they would sponsor feasts and entertainment and initiate new members. The primary functions of the Kiowa men’s societies were social and economic. In hosting feasts and giving gifts to honored guests they would redistribute wealth.

The Kiowa Eagle Shields had prestige similar to the Taime Shields. Eagle power was associated with war and therefore those who owned Eagle shields were courageous in battle.

The members of the Kiowa Old Shield Society had the ability to see the future and to talk with the spirits of the dead about finding lost articles. The society was founded by Mamanti (Sky Walker) following the Treaty of Medicine Lodge in 1867.

The Kiowa also had a women’s society, the Calf Old Women, which was equal in rank to the Skunkberry People. Since the society had war power, men would present its members with gifts before leaving on a war party.

Another Kiowa women’s society was the Bear Old Women which was a secret society that controlled bear power. This is one of the oldest Kiowa societies.