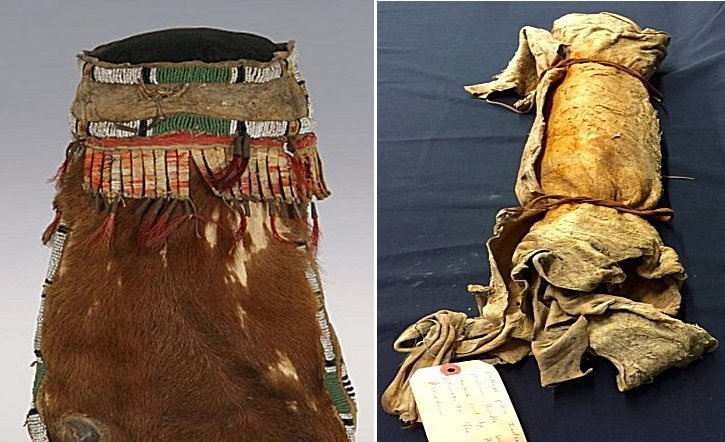 Among the Cheyenne there are two sacred medicine bundles: The Sacred Arrows (Maahotse) and the Sacred Buffalo Hat (Esevone). The spiritual power of these bundles could be tapped ceremonially to help the tribe prosper. As long as the ceremonies were performed as taught by the culture heroes, the tribe would be protected and would prosper. Failure to respect the bundles would be followed by misfortune to the tribe.

The Massaum Ceremony is an ancient Cheyenne ceremony which was given to the people by Sweet Medicine who first performed it at Bear Butte. The five-day ceremony re-enacts the creation of the world. During this ceremony, the Sacred Arrows are cleansed and all creation is renewed.

The Sacred Arrows are symbols of male power. Women do not look at them when they are exposed to veneration. Even today, women will excuse themselves from the presence of men who are speaking about the Sacred Arrows.

White Thunder quickly tied the Sacred Arrow bundle to the lance of Bull, a warrior-priest. This was done in haste, without separating the four arrows into two pairs.

Two new arrows were eventually made and the bundle continues to be an important part of Cheyenne spiritual life.

When the Sacred Buffalo Hat is renewed, those seeking a blessing stand at the edge of the old lodge cover facing the Sacred Mountain to the east. The keeper of the Hat then prays and offers the pipe to Maheo, the Earth, and the four directions. In single file, those wishing a blessing walk across the old cover to the east.