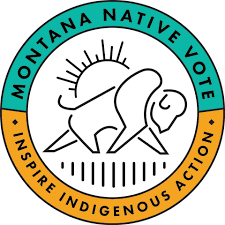 The state of Montana has a long history of attempting to deny or reduce the Indian vote. The Montana state constitution was amended in 1932 to permit only taxpayers to vote. Since Indians on reservations did not pay some local taxes, they could not become voters.

The Montana state legislature in 1937 passed a law requiring all deputy voter registrars to be qualified, taxpaying residents of their precincts. Since Indians living on reservations were exempt from certain taxes, this requirement excluded almost all Indians from serving as deputy registrars. It thus denied Montana’s Indians access to voter registration in their own precincts.

In 2012, a federal judge denied a request to establish satellite election offices for American Indians on three Montana reservations: Crow, Northern Cheyenne, and Fort Belknap (Gros Ventre and Assiniboine tribes). The judge ruled that there was no evidence that Indians were being prevented from voting for the candidates of their choice.

This week, civil rights attorneys from the U.S. Justice Department filed a friend-of-the-court brief contending that the election offices were wrongly denied. According to the brief, the judge overlooked the discrimination suffered by Indians who had to travel long distances. Not only are the reservations rural, but many of their inhabitants are poor and thus lack the resources, such as availability of a car and ability to take time off, to travel to the distant county seat.

There are no alleged problems with voting on election day, when polling stations are set up on the reservation. Rather the discrimination is in early voting and late registration. Montanans can vote by mail with early absentee ballots or by delivering them in person to county offices which are located some distance from the reservation. Late registration begins at county offices a month before Election Day. According to Derrick Beetso of the National Congress of American Indians:

“Effectively, this gives folks living near the county seat almost 30 days more to vote. Indian tribal members living on the reservation effectively have only one day.”

The National Congress of American Indians has also filed briefs in support of the plaintiffs.

The defendants in the case include election officials from Big Horn, Blaine, and Rosebud Counties as well as Montana Secretary of State Linda McCulloch. Attorneys for the defendants have tried to get the appeal of the judge’s ruling dismissed, arguing the case was moot because the election has passed. However, this was denied by the 9th Circuit Court of Appeals.