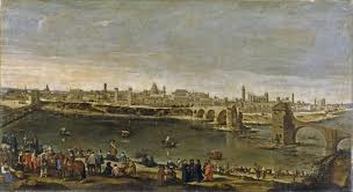 During the first quarter of the eighteenth century-1700 to 1725-the English colonies in Massachusetts sought to strengthen their dominance of the Indian nations of the regions. They expanded into Indian lands, assumed that English law was superior to Indian law, and resorted to the use of military action when necessary.

In 1700, Mashpee leader Simon Popmonit complained to the General Court about the fraudulent labor practices of their English neighbors. The English would make small loans to the Indians or threaten them with lawsuits and as a result the Indians would be bound to the English settlers for debts. The Court agreed to have two justices of the peace approve all future indentures and empowered them to act on complaints against existing contracts.

In 1701, Massachusetts set aside the Fall River Reservation for the Wampanoag.

In 1702, Magnalia Christi Americana written by Cotton Mather presented the origin story of the Puritans in New England. Contrasting the English Protestant approach to Indian land with that of the Spanish Catholics, Mather wrote that the English

“would not own so much as one foot of land in the country, without a fair purchase and consent from the natives that laid claim unto it.”

Mather did not make any mention of the infectious diseases which killed several thousand New England Indians and reduced their populations.

In 1703, the bounty on Indian scalps in Massachusetts was now £12. In Northampton, Massachusetts, the Reverend Solomon Stoddard urged his parishioners in 1703 to use dogs to “hunt Indians as if they were bears” and he told his congregation that Indians “act like wolves and are to be dealt with like wolves.”

In 1703, the Gay Head produced a 1681 document showing that the sachem Mittark and his counselors had been promised that the land would remain theirs. When questioned about the document, Hossueit admitted that it was written down after Mittark’s death and the court declared it to be a forgery and to uphold the deed for the Gay Head land to the Governor of New York. The document was a valid oral agreement which had been later written down, a common practice among Native Americans at this time.

In 1703, the Indians of the Billingsgate community moved to Potawaumacut.

In 1703, the English colonists in Massachusetts passed legislation which imposed a 9:00 PM curfew on Indians and black slaves in English towns.

French soldiers together with Abenaki and Mohawk warriors attacked Deerfield, Massachusetts, in 1704, killing 50 of the colonists and abducting 100 more. The English responded to the raid by attacking Indian villages in the interior. The French-allied Indians also attacked the English at Haverhill in Massachusetts, Oyster River and Dover in New Hampshire, and York in Maine.

In 1704, the Pocasset petitioned the governor of Massachusetts to grant them a plot of land. Benjamin Church was appointed as the tribe’s Indian guardian. Their new reservation was divided into two parcels on opposite sides of the Watuppa Ponds. The Indians who settled on this land were Indians who had supported the English in earlier wars against other Indian groups.

In 1705, the General Court sent to all Indian villages a book of laws which was written in both English and Massachusett to ensure that all natives understood the new regime. At this time, the Indian communities had a moderate amount of local self-government. In some instances there were Indian magistrates who were empowered to prosecute minor infractions on the part of Indians.

In 1705, the General Court debated a bill which would provide extraordinary penalties against the marriage of Europeans with blacks or Indians. Not all favored the bill and the reference to Indians was removed.

In 1707, the Christian Indian community of Natick began holding the annual election of town officers like its English neighbors.

In 1707, John Williams published his book The Redeemed Captive which was an account of his capture at Deerfield in 1704. His story of salvation from heathenism (Indian) and Catholicism (French) made the book a bestseller.

Also in 1707, the Pocasset petitioned the General Court to have their land holdings consolidated into a single property so they could have a common place for public worship and a school.

That same year, the Wampanoag Fall River Reservation was divided into individual lots.

In 1709, the 160-acre Fall River Reservation is established for the Pocasset who sided with the English during King Philip’s War. The tribe exchanged their two parcels of land on the Watuppa Ponds for land owned by their guardian, Benjamin Church, in the Freetown area. The deed conveying the land to the Indians specified that it was always to be used as a plantation and settlement for the Indians and noted that many of them had been of service to the English in past wars. The Pocasset were to pay one-quarter of good venison to the governor on the winter solstice.

In 1710, the Mashpee complained that the English town of Barnstable was claiming part of their lands. The General Court sent a committee to review the boundaries but was unable to resolve the issue.

In 1711, the Gay Head Reservation was established on Martha’s Vineyard. The New England Company decided that the Indians should pay for a part of the costs of the reservation and over the objection of the Gay Head, 600 acres were leased to an English settler. The better lands were leased to English colonists at low rates which brought in little income for the Indians.

In 1714, the Monomoy sold their land. Tribal members moved to Potawaumacut and to Sahquatucket.

In 1715, the New England Company asked the Natick to sell them the apparently abandoned praying town of Magunkaquog. The Company proposed to rent out the land to English settlers and share the rent money with the Natick families. The Natick, however, were still growing crops in the area and had deep emotional feelings about the area. Magunkaquog means the “place of the giant trees” in reference to the great trees – oak and chestnut – which were found in abundance in the area. After initially rejecting the offer, the Natick agreed to the deal. After signing the deed, one of the signatories, Isaac Nehemiah, commited suicide by hanging himself with his belt.

In 1716, the Nantucket complained to the General Court about the injustice and oppression which they suffered from their English neighbors. They asked that the island be placed in another county so that their legal conflicts with the English could be heard elsewhere. The Court responded by having two judges on the mainland hear their disputes.

In 1718, the legislature passed a law which required that contracts with Indians have the approval of two local justices of the peace. The law sought to prevent Indians being forced into servitude when English settlers forced them into unreasonable debts. These actions were often preceded by the consumption of alcohol so that the Indians were drunk when they signed the contracts.

In 1719, the Natick created a proprietorship – a corporate entity to govern land allotments. The 20 proprietors – 19 men and one woman – were the heads of long established families. The proprietorship provided secure land titles and boundaries under colonial laws which were seen as useful in meeting outside pressures. On the other hand, the corporate entity moved the Indians from traditional concepts of land ownership to more European concepts.

Massachusetts governor Samuel Shuttle declared war on the Abenaki in 1722. This war was called Drummer’s War, Grey Lock’s War, Lovewell’s War, or Father Rasles’ War. Part of the concern of the English colonists was the presence of Jesuits among the Abenaki. The colonial Puritans were anti-Catholic and particularly anti-Jesuit. Jesuit Father Sebastian Rasles strongly encouraged the Abenaki to defend their lands and themselves against the English colonists.

Grey Lock, a Woronoco living in the village of Missisquoi, led Abenaki raids against the English settlements in Northfield and Rutland, Massachusetts in 1723. Colonial cavalry and scouts were unable to find the raiders.

In 1724 Massachusetts built Fort Drummer in response to Grey Lock’s raids. In spite of the Fort, Grey Lock struck again. The raid was successful even though the colonists had advance notice that the Indians were coming. Massachusetts sent out a force to find Grey Lock, but he eluded them and continued raiding deep into Massachusetts.

The Massachusetts colonial army attacked the Norridgewock (an Eastern Abenaki group). Father Rasles (also spelled Rale), was killed and his corpse was mutilated.

In 1724, an English force of 87 men under the leadership of John Lovell attacked a small Indian camp, killing ten people. They scalped the dead and then returned home to collect the bounties. With this success and envisioning easy money, Lovell embarked on a campaign to acquire more Indian scalps. This time, however, the English were ambushed and Lovell killed.

That same year land was granted for English settlement along the Housatonic River. The Indians were paid 460 pounds, three barrels of cider, and 30 quarts of rum. Because of disease, the once large Indian population in the area had been decimated and only two major villages remained.

Also in 1724, the New England Company expanded the lease of Gay Head land from 600 acres to 1,000 acres. The Indians protested the new lease.

In retaliation for Grey Lock’s raids, Captain Benjamin, considered an “experienced’ Indian fighter, raised a force of 59 men and in 1725 set out to attack Grey Lock’s home town of Missisquoi. The force returned after a month without encountering any Indians, only to find that Grey Lock had followed them. Grey Lock spent the summer raiding Massachusetts settlements.

The Abenaki signed a peace treaty ending Grey Lock’s or Drummer’s War in 1726. Grey Lock returned to the village of Missisquoi, but never signed the treaty.