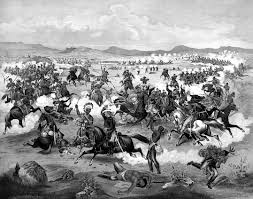 The American Indian histories of 1866 carry numerous accounts of wars, battles, massacres, and other conflicts. Some of these are briefly described below.

Following the Civil War, non-Indian settlement in the West increased and with this came more conflicts with the Indians who lived in the area. It was not uncommon for the American intruders to advocate genocide as the “solution” to what they saw as the “Indian problem.” For example, in California, the Chico Courant reported:

“It is a mercy to the red devils to exterminate them, and a saving of many white lives. Treaties are played out—there is only one kind of treaty that is effective—cold lead.”

In California, when the Luiseño left their village of Pejamo for their summer rounds, local Anglos entered the village, set fire to the houses, and then simply took possession of the fields and water supply. While both the Indians and their federal Indian agent complained, the Anglos retained control of the land.

In Nevada, Mormon settlers in Muddy Valley discovered a group of Indians drying the meat from a stolen cow. They took the Indians prisoner and then severely whipped them. The Mormons then met with the Indians and told them that the stealing of cattle must end.

In Nevada, the 2nd California Cavalry, a group of volunteers, attacked a Paiute band near Rock Creek. They killed 115 Indians and captured 19.

In Kansas, American settlers formed militia groups to defend their illegal claims to Osage land. James Thomas, in an article in Chronicles of Oklahoma, reports:

“Village stores were looted, and Indian houses were dismantled for building materials. Nothing the Indians owned was sacred; settlers even plundered Indian graves in the hope of finding the treasure that the Osages often buried with their dead.”

In Arizona, American prospectors murdered Walapai leader Wauba Yuma. The Pai bands responded in a traditional way to exact vengeance on the Americans. The result came to be called the Walapai War. Stephen Hirst, in his book I Am The Grand Canyon: The Story of the Havasupai People, reports:

“The war went on for three years, mostly in the form of skirmishes but with a few actions that we would now call massacres.”

In northern Arizona, two Mormon settlers were tracking stolen sheep in fresh snow when they encountered Navajo raiders. Both Mormons were killed. In response to the killings, the Mormons formed a militia which discovered stolen goods in a Paiute camp. The militia attacked the camp, killing two Paiute. Five other Paiute were captured, interrogated, and then executed.

The Paiute responded to the attack by later killing two Mormon men and a woman as a form of retaliation. As the Mormons in the area began planning their retaliation, Brigham Young invoked the church’s traditional policy of peace with the Indians and ordered Mormon withdrawal from the Paiute lands at Long Valley and Kanab.

In Arizona, a small party of Tolkepaya Yavapai encountered an American wagon train near Skull Valley. The Yavapai informed the teamsters that this was their land and that the water, grass, and corn belonged to them. The Yavapai would allow the Americans to leave unharmed if they surrendered their mules and the contents of their wagons.

A group of 13 soldiers—members of the Arizona Volunteers—arrived with orders from Fort Whipple to “punish” the Yavapai. Then more Yavapai and Tonto Apache arrived, including some who had papers showing that they have permission to be in the area.

On the third day of the standoff, about 80 Yavapai and Tonto Apache laid down their bows, and displaying their papers from the government, approached the wagon train peacefully. The soldiers opened fire, killing more than 40.

The Arizona Volunteers waged a war against the Yavapai and killed at least 83. The Volunteers were waging a war to exterminate Yavapai families.

In Montana, a Blackfoot war party attacked a government farm on the Sun River and burned the buildings. They also raided against a nearby cattle ranch. The raids were motivated by Blackfoot anger against Americans trespassing and settling on their lands.

Following the Civil War, as American settlers began to flood into the West, more Indian tribes were pushed into smaller hunting grounds and intertribal warfare increased. Briefly described below are some of the intertribal conflicts of 1866.

In Montana, a Pend d’Oreille buffalo hunting party was attacked by the Blackfoot. Twenty men and one woman were killed.

In Montana, a war party of Crow and Gros Ventre attacked the Piegan Blackfoot camp of Chief Many Horses. Many Horses was killed, and the Blackfoot, angered over the death of a popular chief, attacked the Crow and Gros Ventre with ferocity. The Blackfoot warriors chased their retreating attackers for many miles. Anthropologist John Ewers, in his book The Blackfeet: Raiders on the Northwestern Plains, reports:

“In this most disastrous defeat with the memory of both the Gros Ventre and Crow tribesmen, more than three hundred of them were killed.”

The Blackfoot lost only 20 warriors.

In Montana, a party of Spokan were hunting buffalo. During the hunt, they captured several horses from the Blackfoot. In retaliation, the Blackfoot killed a Spokan chief and captured 160 Spokan horses. The horse-poor Spokan captured some non-Indian horses on their way home. In Missoula, Spokan Garry was arrested, but the Indian agent arranged for his release.

In Wyoming, the Shoshone and Bannock fought a battle against the Crow at Crowheart Butte. After five days, it was apparent that neither side would be able to win. Thus it was agreed that Shoshone chief Washakie and Crow chief Big Robber should fight a duel to settle the matter. Washakie won the duel, but he was so impressed by Big Robber’s bravery that he did not scalp him, but instead cut out his heart. One of the Crow women who was captured at the battle later became one of Washakie’s wives.

In Wyoming, a party of Shoshone returning from a successful buffalo hunt were attacked by the Sioux. Under the leadership of Washakie, the Shoshone counterattacked and drove the Sioux back. Angry because his son Nan-nag-gai did not take part in the battle, Washakie rebuked the young man. Nan-nag-gai then attacked the Sioux alone and was killed. Historian Grace Raymond Hebard , in her biography Washakie: Chief of the Shoshones, writes:

“Washakie realized that he was himself responsible for his bereavement. The story runs that overnight his hair turned white.”

In New Mexico, a Comanche war party captured a number of horses from the Navajo at the Bosque Redondo, and from the army and some Americans at Fort Sumner. The army sent out a force in pursuit. The Comanche halted and raised a white flag, but they were fired upon by the army.